Speaking with StarBizWeek, AmBank Group chief economist Anthony Dass (file pic) says there is a need to focus on the M40 group, given that their living costs are much higher in the urban areas

A fresh stimulus package of RM40bil was announced earlier this week, on top of the RM100bil yet to be utilised from the previously announced packages.

The Pemerkasa Plus package is the government’s immediate response to the impact from the ongoing lockdown, despite the country’s limited ability to spend and its high debt burden.

However, the stimulus package has drawn criticism from some quarters, who said that the middle 40% (M40) income group has been sidelined, with insufficient measures targeted towards this population.

Among those criticising are politicians from both sides of the divide and a key contention is whether the loan moratorium should be extended to the M40 group.

In addition, some feel that one-off cash handouts should also be given to the M40 households besides the B40 population.

M40 refers to those households with a monthly income of RM4,850 to RM10,959, according to the Statistics Department.

Experts agree that not all M40 individuals are affected by the crisis, but they feel that more measures are needed to support this income group in order to boost Malaysia’s economic recovery.

Speaking with StarBizWeek, AmBank Group chief economist Anthony Dass says there is a need to focus on the M40 group, given that their living costs are much higher in the urban areas.

“For instance, a trader who has lost his income substantially due to the movement control order (MCO) is not eligible to receive any aid, should his spouse’s income fall into the M40 category.

“Certainly this will add strong pressure on those affected, ” he says.

Dass adds that the M40 should be given automatic moratorium as opposed to the current model where one needs to prove job loss or pay cuts.

Other support measures, for M40 suggested by Dass, include e-Wallet credit and raising the discount on electricity charges which is currently given at 10%.

“There must be consistency in policies for aid. It means that the affected households should continue to receive support until we reached the vaccination target.

“Otherwise, we will have ad hoc policies whenever MCOs are imposed.

“They will only cause greater difficulties for households, ” according to Dass. While he believes that one-off cash handouts are unnecessary for the group, he says that other support measures should be introduced.

“Overall, the Pemerkasa Plus did not completely sideline the M40. For example, those from the M40 group who have lost their jobs or took a pay cut, would benefit from the loan moratorium, ” Manokaran (pic above) points out.

Permatang Pasir assemblyman Muhammad Faiz Fadzil concurs that there are some measures under the Pemerkasa Plus that would benefit the M40 group.

“But the question is whether it is adequate considering the economic challenges faced by almost everyone today.

“Having a RM5,000 monthly household income would put you in the M40 group, but if you are living in the Klang Valley, chances are the amount is not sufficient, ” he says.

He says the initiatives should be made available to all M40 individuals on a means-tested basis or based on certain criteria such as the number of children or the location of domicile.

“Yes, the government’s fiscal capacity is limited, but by putting more cash into the pockets of the population, it can stimulate the economy by boosting private consumption.

“That is a remedy for our soft economic conditions, ” adds Muhammad Faiz.

The movement restrictions since last year have delivered a big blow to consumer-appetite in the country.

During the first round of the MCO last year, the Statistics Department found that the average monthly household expenditure fell 55% from RM6,317 to RM2,813.

MCA Youth chief Datuk Nicole Wong Siaw Ting, in a letter to The Star, said that the wing had received public feedback that the M40 group has been sidelined in the Pemerkasa Plus package.

She said nobody is immune to the lockdown effects and recommends that a special personal income tax relief for the M40 by introduced by the government.

“The government’s concern for the low-income groups and affected sectors is indeed understandable.

“However, it is still in the early stage of the total lockdown, and the government still has time to ensure that its measures will benefit more layers of society, ” stated Wong. Commenting on the Pemerkasa Plus package, Yeah opines that a bolder and larger package would have enabled the distressed households to better cope with income and job losses.

It would also minimise the possible “scarring effect” of the prolonged crisis that could have affected the vulnerable segments of the M40 group, especially those that have lost their means of livelihood due to retrenchments or business shutdowns.

“Use big data and data analytics, as well as self-reporting and means-testing systems to identify the distressed M40 households, especially those with many dependents, so that they can receive the appropriate government support, ” he says.

However, he highlighted that some portion of the cash handouts received may end up in savings, rather than consumption.

“As evident in China and other western and middle-easten countries, the key to unleashing the pent-up demand among the upper M40 and top 20% income groups is by the suppression of the virus and death rates, ” he tells StarBizWeek.

Since early 2020, the economic stimulus packages announced by the government have benefitted over 20 million citizens and 2.4 million businesses, according to the Laksana report.

To date, almost 60% of the initiatives have been disbursed, comprising direct cash assistance such as Bantuan Prihatin Nasional, Geran Khas Prihatin, Wage Subsidy Programme and various other measures to protect the rakyat and ensure business continuity.

Meanwhile, from the approved allocation of RM322.5bil under Budget 2021, RM117.5bil has been spent as of April.

According to the latest Laksana report, among the Budget 2021 measures that are being implemented are the welfare assistance to vulnerable groups such as bedridden senior citizens, poor families and the disabled.

It is noteworthy that welfare assistance allocation increased from RM1.5bil in 2020 to RM2.2bil in 2021.

In addition, the implementation of the Jendela initiative with an allocation of RM500mil which, among others, will provide fibre connections for schools.

“Other programmes funded by Budget 2021 development expenditure include a micro credit fund of almost RM1bil and a school maintenance programme, ” stated the report. 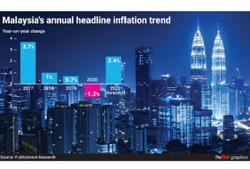