Total combined gross development value for the planned launches will be in excess of RM900mil, Land & General said.

In announcing its results on Monday, it said its profit before tax was 42% higher at RM37.16mil compared with RM26.18mil

“Higher full year profit before tax was due to higher sales and progress billings from its on-going Damansara Seresta project located in Bandar Sri Damansara; and lower development cost incurred arising completion and handing over of Astoria Ampang Phase 1 and Sena Parc Phase 1A mid-way through the financial year, ” it said.

L&G said revenue for FY21 was RM134.89mil compared with RM139.72mil a year ago due to vacant possessions handed over for two projects, namely Astoria Ampang Phase 1 in Ampang and Sena Parc Phase 1A in Senawang, Negeri Sembilan.

It said its revenue was 26% higher at RM30.2mil compared with the preceding quarter due to higher sales and progress billings from its on-going Damansara Seresta project.

“The group nonetheless is cautiously optimistic of its performance for the coming year with its planned launches of three new property projects.

“They are Astoria Ampang Phase 2 (506 units of serviced apartments in Ampang); Sena Parc Phase 2 (54 units of double storey terrace houses in Senawang, Negeri Sembilan) and a yet to be named residential project comprising 732 units of condominiums located next to the group’s head office in Bandar Sri Damansara

“Total combined gross development value for the planned launches above will be in excess of RM900mil, ” L&G said. 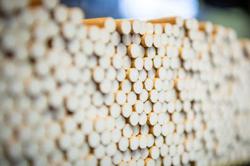