Singapore Press to spin off media Into non-profit entity 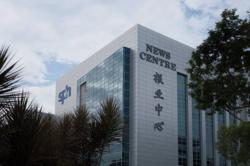 SINGAPORE: Singapore Press Holdings Ltd., which publishes the country’s flagship daily newspaper, plans to spin off its media business into a non-profit entity after conducting a strategic review of its businesses.

Faced with a steadfast decline in the media business, Singapore Press -- which also invests in properties from shopping malls to student accommodation -- has approached the government with a proposal to put the unit on a sustainable financial footing, it said in a statement on Thursday. The government has indicated its support for the restructure, it said.

"SPH shareholders are not likely to tolerate the continued negative impact that the media business has on the company’s financial prospects, ” company chairman Lee Boon Yang said at a briefing. "On the other hand, we cannot allow a functioning, trusted and respected media organisation to be whittled down over time by market pressure and commercial constraints.”

The company will provide initial resources and funding worth at least S$110 million ($82 million) to a new unit, which will eventually be transferred to a non-profit entity.

This structure that allows the media business to "seek funding from a range of public and private sources with a shared interest in supporting quality journalism and credible information is the optimal solution, ” the company said in a statement.

The publisher of The Straits Times and The Business Times added that winding up or selling the business were not feasible options given the function of providing news and information to the public.

Singapore Press said that while such a model may be unfamiliar in the country, many news organizations overseas are operating under these funding structures. These include the Guardian in the U.K. that’s been controlled by the Scott Trust since 1936 and the Tampa Bay Times in the U.S. that’s owned by the non-profit Poynter Institute, it said.

SPH’s shares were halted for trading on Thursday pending release of the announcement. They have gained 17% since the end of March, set for their third straight quarter of gains.

Shares rose to their highest in more than a year in April, before paring some of those gains, after company said in March that it is undertaking a strategic review to consider options for its various businesses.

Credit Suisse Group AG is financial adviser to Singapore Press, while Evercore Asia (Singapore) Pte. has been appointed to advise the company’s board of directors. - Bloomberg