THE dollar weakened by 0.27% to 90.61, marking the fourth consecutive week of decline. As a result, the dollar’s year-to-date gains have narrowed to a mere 0.8% as at April 29, versus its peak of 93.30 or 3.2% a month ago. Nonetheless, the dollar’s trade remained choppy during the week, albeit at a modest level.

All eyes were the FOMC meeting as well as US corporate earnings with many companies delivering stronger-than-expected results. The FOMC meeting ended broadly in line with expectations as the Fed unanimously voted to keep rates unchanged at a record low of 0.00% to 0.25%, while maintaining the current pace and composition of bond purchases.

While the Fed acknowledged the recent progress in growth and employment, the central bank maintained an overall dovish tone which in turn crippled the dollar’s upward momentum. During the press conference, Fed chair Powell reiterated that the recovery “remains uneven and far from complete” and “the economy is a long way from our goals and is likely to take some time for substantial further progress to be achieved”.

At this juncture the Fed’s forward guidance suggests the a rate hike in the US will be visible should: the labour market attains maximum employment; inflation reaches 2%; and inflation is on track to moderately exceed 2% for some time.

Apart from that, President Biden proposed a bigger government investment that includes US$1.8 trillion for additional spending on childcare, education and paid leave, partly offset by higher taxes on the wealthy.

Meanwhile, economic data release in the US showed Q1 GDP rising 6.4% annual pace (previous: 4.3%; consensus: 6.1%) supported by Covid vaccines and fiscal stimulus. It showed a “virtuous cycle has clearly sprouted, with plenty of room for growth in the coming quarters. Consumers are flush with cash and Covid fatigue has put them in the mood to spend. Besides, first-time jobless benefit claims fell by 553,000 as of April 24 from 566,000 a week earlier (consensus: 549,000). It was the lowest level of claims since the pandemic struck last year.

The euro continued to benefit from the weaker dollar, down 0.20% to 1.21, hovering around its two-month high. Positively, Germany’s Economic Minister upwardly revised its GDP forecast to 3.5% in 2021 (previous: 3.0%) following expectations of a busy industrial economy and demand for German goods abroad. The expectation also hinges on the belief that the virus-induced lockdown will be eased in Q2 as Germany’s vaccination programme gathers pace. As of April 28, vaccinated people per capita stood at 22.9%.

The pound emerged as the outperformer in the G4 space, appreciating by 0.49% to 1.39, the highest in one week, benefiting from the well managed Covid-19 battle. The yen witnessed heavy selling pressure, depreciating 0.97% to 108.9, the weakest in nearly two weeks. Nonetheless, the Bank of Japan (BoJ) monetary meeting, as expected, was a non-event with policymakers keeping the interest rates unchanged at -0.10% while the yield curve control target on 10-year JGBs was steady at about 0%.

Amid a short working week, the ringgit posted a decent gain of 0.11% to 4.10, briefly touching its strongest level in two months at 4.097. Firmer commodity prices, improving global trade and soft dollar undertone kept bids for the ringgit alive.

The US Treasury curve bear steepened with the two-year note falling 0.5 bps while the belly to back end rose 3–7 bps. The closely watched 10-year UST climbed 6.8 bps to 1.63%, hitting a near three-week high, while the 10-year/2-year UST spreads widened to 147 bps. While the dovish tone during the FOMC helped suppressed the front end rates, the selling flow towards the back end continued as investors acknowledged the Fed’s decision to let the economy run as hot as it possibly can. Also, the hot Q1 US GDP print and initial jobless claims data added to the evidence the US is swiftly recovering from the pandemic, prompting investors to lighten exposures in longer tenure papers. As of noon Friday, the 2-, 5-, 10- and 30-year benchmark UST yields stood at 0.16%, 0.85%, 1.64% and 2.31%, respectively.

Risk appetite and liquidity were absent in the local bond market ahead of the Fed meeting as well as a local public holiday where many were expected to be taking Friday off as well for an extended weekend.

Amid thin volume, some traders lightened their positions which saw some upward pressure on the MGS curve. As at end-Wednesday, the MGS curve bear steepened with the front end rising 0.2–1.5bps while the belly to back-end climbed 5–10bps.

During the week (April 23–29), the FBM KLCI inched up 0.77 point or 0.05% to 1,608.50 points, underperforming both the MSCI Emerging Markets Index (+1.72%) and the Dow Jones Industrial Average (+0.72%). Globally, investors reacted positively to upbeat earnings reports from tech giants Apple, Alphabet, Amazon and Facebook and a stronger-than-expected Q1 US GDP growth of 6.4% (vs. consensus forecast of 6.1%).

Investors also took comfort in the Fed holding its target interest rate at 0.25% and keeping its dovish stance, although it acknowledged that pace of recovery in the US had improved. Locally, investors continued to lighten their positions in recovery-themed stocks and scooped up glove names against a backdrop of a resurgence in Covid-19 infections globally.

Foreign investors unloaded RM225.9mil worth of Malaysian equities during the week, pushing the y-t-d cumulative net outflow to RM2.7bil. Local institutional and retail investors continued to dominate the market with a participation rate of 44.9% and 39.8% in April respectively (comparable to 44.1% and 39.4% in March respectively). Foreign investors remained passive with a participation rate of 15.3% in April (compared with 16.6% in March).

Foreign investors piled into Malaysia Government Securities (MGS) for an 11th straight month with a net inflow of RM1.5bil in March 2021 (vs. RM3.5bil in February 2021). Equity trading activities subsided with an average daily value traded (ADVT) of RM4.0bil in April (vs RM5.0bil in March). Similarly, turnover velocity slowed down to 54.0% in April (vs 67.8% in March).

In the coming week, investors will keep a close eye on:> China Caixin manufacturing PMI (April) on May 3;

> Malaysia interest rate decision on May 6;

> Malaysia labour statistics (March) on May 7;

> US unemployment rate (April) on May 7. 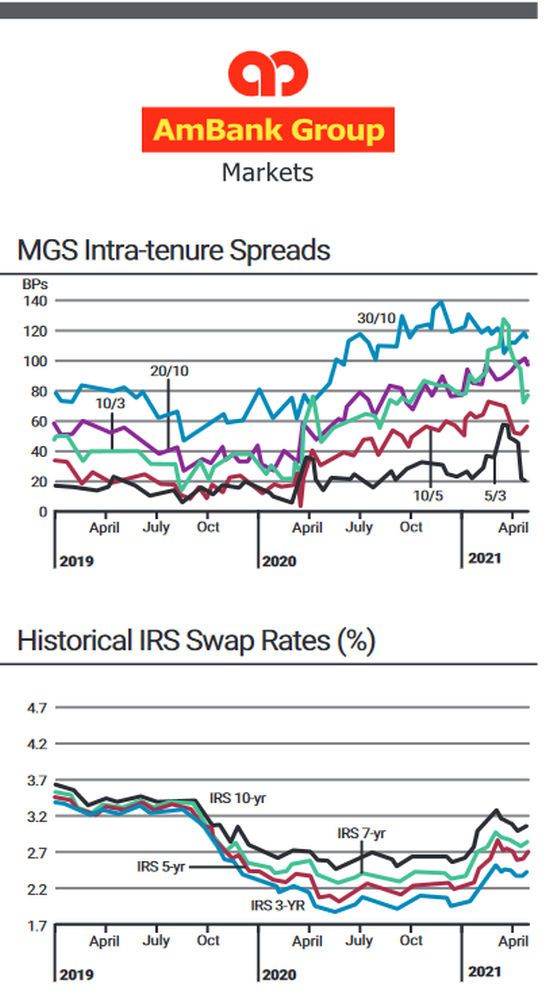