FILE PHOTO: People gather in front of a restaurant of U.S. burger chain Shake Shack on its opening in Shanghai, China, January 24, 2019. - reuters

After making its debut in Hong Kong, Shanghai, Beijing and Macao, the global fine fast food giant will open its first store in the southern part of the Chinese mainland in the MixC World Shopping Mall, Shenzhen, Guangdong province, in May.

By 2030, Shake Shack and licensee Maxim’s Caterers Ltd plan to open at least 15 chain stores in South China, including locations in Shenzhen and Guangzhou, Guangdong, as well as Fuzhou and Xiamen in Fujian province, and 55 chain stores in total in the Chinese mainland, said the companies.

“We are very excited about the opening of the Shenzhen outlet. When I was touring in Shenzhen last year, I was amazed by the growth and vitality of the city, where a great amount of people are moving and building up dynamism. We just felt now is the time to bring Shake Shack to the city,” said Randy Garutti, CEO of Shake Shack.

Garutti said that similar to the Shake Shack store in Shanghai, the one in Shenzhen will also have its own localised features. In terms of menu, the store has “Shenzhen Exclusives”.As the subtropical city is rich in guava, it will launch “Fan’tastic Shenzhen”– a vanilla custard treat blended with guava, topped with passion fruit, mango, whipped cream and salted plum powder.

“Be-an Idol”– a red bean-flavoured ice cream topped with grass jelly – is also on the exclusive list, as grass jelly is a popular choice among the Cantonese because it helps relieve humidity-related overheating.

On Jan 24, 2019, when Shake Shack established its first store in the Chinese mainland in Shanghai, customers initially lined up for as long as seven hours. On ordinary business days, hundreds of people circle around the old Western style villa where the store is located to get a fresh bite of casual US cuisine. 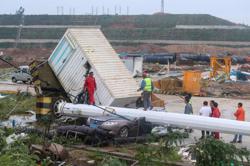