The ECB is buying bonds to limit the differences between yields for the strongest and weakest economies in the eurozone, according to officials familiar with the matter, with one person saying the central bank has specific ideas on what spreads are appropriate.

The ECB is buying bonds to limit the differences between yields for the strongest and weakest economies in the eurozone, according to officials familiar with the matter, with one person saying the central bank has specific ideas on what spreads are appropriate. An ECB spokesman declined to comment.

Investors have long wondered whether the central bank has specific levels in mind when it tries to cap bond yields. The latest insight into its strategy sheds light on how policymakers are navigating eurozone complexities that make publicly targeting bond levels difficult.

Sovereign yields are key to fighting the pandemic crisis. Not only do they influence all other loan costs, but keeping government borrowing affordable has become a critical part of monetary policy as companies and workers rely on massive, debt-financed fiscal support.

The ECB’s strategy explains why the spread between Italian and German debt has stayed remarkably stable despite the Italian government nearing collapse, after the central bank raised the pace of bond buying.

It’s different to the so-called yield curve control deployed by the Bank of Japan (BoJ) and Reserve Bank of Australia (RBA), which have publicly announced numerical targets for specific yields. In the case of the BoJ, it aims for zero percent on the 10-year government bond.

ECB president Christine Lagarde, who convenes the first policy meeting of the year today, doesn’t have that luxury. She has to manage the monetary needs of a currency union with 19 nations, each issuing their own debt.

Right now, that means pledging to lock financial conditions in place through the crisis. Those conditions are broadly defined, including “all private and public sectors of the economy, comprising interest rates as well as credit volumes and conditions, ” according to the account of December’s policy meeting.

While that strategy is similar to yield curve control, “they’re calling it something different, ” said Christoph Rieger, head of fixed-rate strategy at Commerzbank AG. “My feeling is that this is an important thing for the ECB, they’re looking at it and they’re actually envious of the BoJ. They would love to have something like that.”

Yield curve control has caught on as central banks delve deeper into their toolkits after cutting interest rates to record lows and unleashing trillions of dollars in bond-buying. In theory, it’s cheaper than quantitative easing alone because investors are essentially told not to fight back.

The BoJ adopted the policy in 2016 as a stimulus tool to boost inflation. 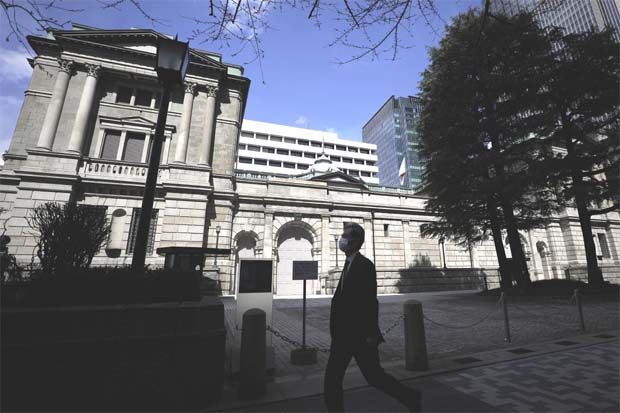 The RBA decided last March to keep three-year yields at around 0.25%, and in November reduced that to around 0.1%. US Federal Reserve vice-chair Richard Clarida said late last year it’s part of the toolbox.

The pledge has to be credible though. Investors must believe the central bank will spend as much as needed to defend its policy, and that’s where the ECB runs into problems.

For starters, it lacks a single bond to target. That’ll change soon when the European Union starts issuing joint debt to finance its €750bil (US$909bil) recovery fund, but that plan is a temporary one linked to the pandemic – the ECB could run out of bonds to buy.

The central bank is also forbidden by EU law from directly financing governments. It has kept its bond-buying programmes legal by imposing limits on what it can buy and for how long, but yield curve control is implicitly limitless. — Bloomberg