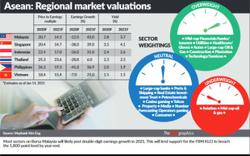 Maybank Investment Bank is looking at a stock market benchmark index target of 1,830 for this year.

PETALING JAYA: A combination of better earnings and ample liquidity is what will drive the local equity market higher this year.

Maybank Kim Eng regional head (equity research) Anand Pathmakanthan said the investment bank was looking at a 45% year-on-year growth in terms of corporate earnings this year against a decline of 11% last year, supported by continued growth in the earnings of glove companies as well as a recovery in earnings of sectors like banking and plantation.

“Earnings outlook and liquidity – in both areas, 2021 is looking good, “ he said via an online briefing session yesterday organised by Maybank Investment Bank.

There is “no shortage” of liquidity in Malaysia he added due to the 125 basis points cut in the Overnight Policy Rate last year as well as the slashes in the Statutory Reserve Requirement (SRR) ratio.

“This liquidity is looking for returns.”

Nevertheless, he did acknowledge that foreign investors continued to be net sellers of Malaysian stocks.

“Up until December, foreigners were net sellers for 17 months in a row.”

This is not an entirely new issue however, he said as foreign investment has largely been on a declining trend for the past ten years.

He said this was more of a structural issue given that Malaysia was an old economy and lacked the more exciting growth opportunities that other emerging markets such as Vietnam and the Philippines could offer.

“I’ll be happy if they (foreigners) just stop selling, ” he said adding that he thinks that domestic liquidity is enough to take the market forward this year.

Notably, Maybank Investment Bank is looking at a stock market benchmark index target of 1,830 for this year.

In terms of economic outlook, Maybank Investment Bank chief economist Suhaimi Ilias believes that the general narrative not only for Malaysia but also globally is that there will be a return to growth after a recession in 2020.

He said recent gross domestic product data indicated that recessions were “shadowing” but cautioned that the road to recovery will be uneven given that the Covid-19 pandemic remains and there have been new waves of infections and reintroduction of fresh lockdowns.

“We are predicting a 5.1% growth for Malaysia this year after an estimated decline of 5.4% for last year.”

Growth will be broad-based and will continue to be supported by stimulus initiatives.

On whether will there be new stimulus packages, he said there has already been an extension or roll-over of initiatives from last year.

“But never say never, ” he said, adding that whether or not there will be a need for fresh initiatives would have to depend on whether the current economy recovery is under threat.

He is also looking at the ringgit heading to the RM3.90 level against the US dollar this year, largely because of a weaker greenback.

“The market remains cautious in terms of spending, capital expenditure and operation expenditure but all in all, companies are more optimistic than last year, ” he said.

That said, he is calling this year a “transition” year with “modest activities” for the oil and gas sector while year 2022 would see far more excitement.