PETALING JAYA: It has been a rough, bumpy ride for the oil and gas (O&G) industry and the situation will likely drag on into 2021, amid signs of green shoots.

This will be the case at least for the first half of the year, before the bulls pay the sector a visit in the second half.

The spread of the new Covid-19 strain and renewed lockdowns in various parts of the world have put a damper on the global economic recovery and the effects were expected to spill over to the first half of 2021 before inoculation becomes widely available.

Brent crude oil has rebounded above the US$50 per barrel mark and it is projected to trade within this range in 2021 as analysts remain cautiously optimistic on the sector’s outlook. 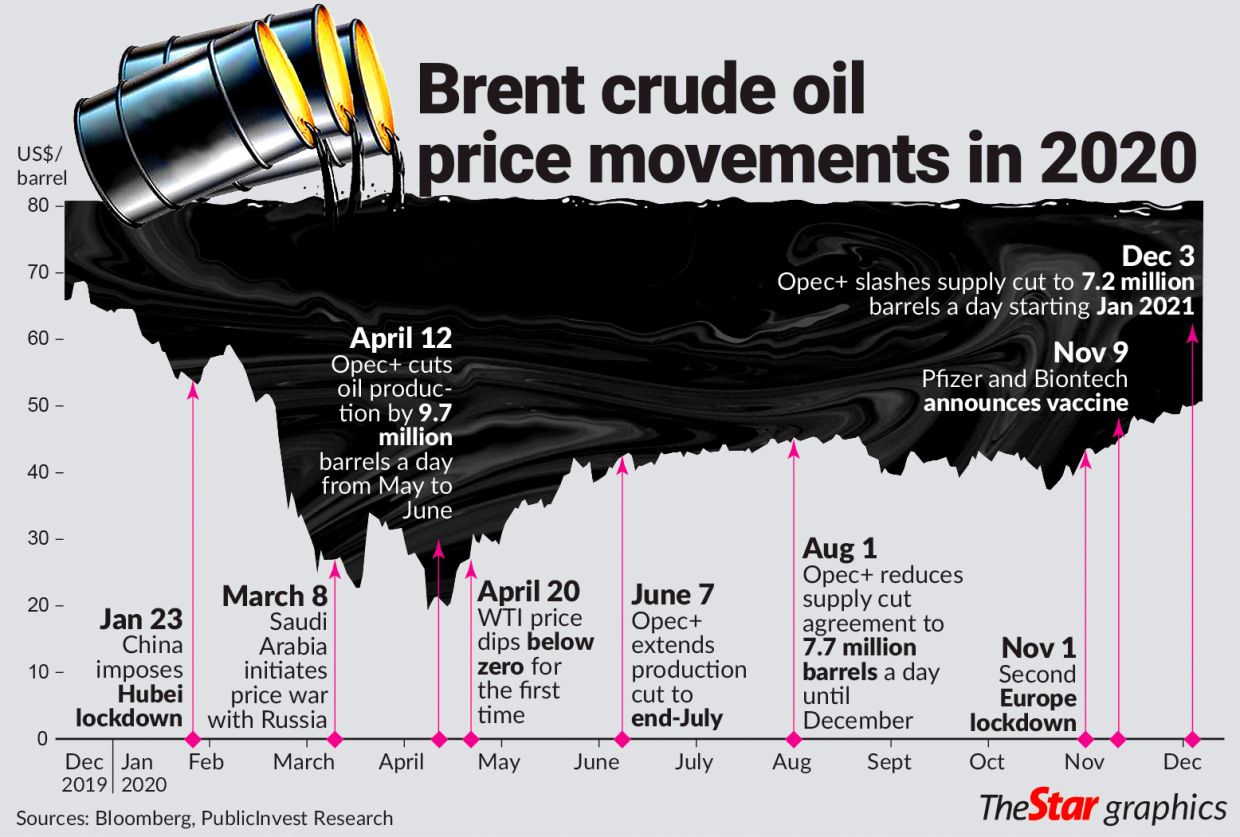 MIDF Research senior analyst Noor Athila Mohd Razali said the road to recovery would remain bumpy at least for the first half of 2021, attributable to factors such as the rise in Covid-19 infections which could threaten the recovery in demand for crude and crude-related products and the expected rise in supply of crude oil as Opec+ continued to ease production cuts by 500,000 barrels every month.

The O&G sector kicked off the year on a very bad footing after succumbing to the double blows of an oil price war waged by Saudi Arabia against Russia after a supply deal agreement collapsed and Covid-19, which pulled the brakes on almost all movements and air travels.

In April, the Brent plunged to 20-year lows following the historic sub-zero fall of the West Texas Intermediate.

Noor Athila added that it is not all doom and gloom as a gradual recovery is expected to take place in the first half, followed by a significant recovery in the second half should the pandemic containment and vaccine roll out worldwide show positive results.

“Further easing of Covid-19 measures will lead to an improvement in business activities worldwide.

“We have observed a stable demand and daily charter rates for rigs and drillships for the past few months which is a positive indicator for the sector despite the current operating climate.

“We are also expecting capital expenditure for exploration and production (E&P) to remain muted in 2021 or mirroring 2020 at best, given that the operating environment has yet to return to pre-Covid-19 levels, which is a deliberate attempt to avoid oversupply of crude oil in the market, ” she told StarBiz.

Kenanga Research analyst Steven Chan said overall activity levels were expected to pick up in 2021 but the recovery trajectory may be slow and gradual.

“These recoveries should be led from the brownfield space, especially towards the second half of the year, while greenfield spending is most likely to remain muted.

“We expect Brent crude oil prices to hover around the US$45 to US$60 per barrel range, ” he said.

Affin Hwang also expected a 10% to 25% hike in offshore service activities, adding that the drilling market will remain robust moving into 2021 and 2022 while engineering and construction projects are only expected to revert to pre-Covid-19 levels in 2023.

While global demand is expected to improve, it would not be at pre-pandemic levels of around 100 million barrels per day (bpd), at least not now.

Paris-based International Energy Agency (IEA) forecast an average of 96.9 million bpd while the United States’ Energy Information Administration (EIA) projected 98.2 million bpd.Affin Hwang Capital Research said in a report that the United States is still staying at an inventory glut despite the gradual reopening that has absorbed some of the inventory.

It said the current level remained elevated at 500 million barrels (mmbbl), higher than the five-year average of 468 mmbbl and 70 mmbbl higher compared to the pre-Covid-19 levels.

Meanwhile, Noor Athila also said the challenge for O&G players next year was to balance between growth and sustainability amidst the current adverse operating environment.

She noted that the growing call internationally for a shift to renewable energy could also determine how industry players conduct their businesses in future.

“The growing interest in environmental, social and governance investing amongst fund and asset management firms worldwide is expected to pose a continuous challenge for the O&G players to remain relevant in the future, ” she said, adding that more O&G companies may potentially invest and venture into the renewable energy realm to balance the need for growth and to ensure sustainability of their businesses and responsibility towards the preservation of the environment.

On the local front, she said Petroliam Nasional Bhd (Petronas) is expected to maintain its 2021 capex spending at about RM30bil to RM35bil.

Public Investment Bank Research turned positive on the O&G sector, saying that the United States, which was once a bane with its increased output over the last four years, could see constraints with the incoming administration of President-elect Joe Biden and his policies and preferences for clean energy.

It added that the possibility of increased taxes and regulation could curtail production and a potential exclusion of Federal land from the drilling programme would also most likely have a positive impact in the short-term.