Positive year ahead for Asia Growth track: An employee works at a warehouse in Wuxi. China’s growth is on track to return to its pre-virus trend, just as it bounced back quickly in the post-Global Financial Crisis period. — AFP

ASIA remains one of the bright spots for investors going into 2021.

Amid the better containment of the Covid-19 pandemic across the region, and supported by the massive fiscal and monetary stimulus measures, Asian economies are likely to see faster and sharper rebound than other parts of the world.

Fund managers and analysts see this as an opportunity to increase exposure to Asia.

BlackRock Inc, for one, says it is overweight on Asia (excluding Japan) equities. The world’s largest asset manager says it is also in favour of Asia fixed-income and high-yield assets.

“Many Asian countries have effectively contained the (Covid-19) virus – and are further ahead in the economic restart, ” BlackRock explains. We overweight Asia ex-Japan equities and Asia fixed income on the region’s effective virus response, and favour assets exposed to Chinese growth, ” it adds. BlackRock Inc, for one, says it is overweight on Asia (excluding Japan) equities. The world’s largest asset manager says it is also in favour of Asia fixed-income and high-yield assets.

In its “2021 Global Outlook” report, BlackRock says it expects Asia’s technology orientation as a factor that would enable the region to benefit from structural growth trends.

BlackRock also expects persistent inflows to Asian assets taking place next year, noting that many global investors remain underinvested in the region, and that China’s growing weight in global indexes will be a pull factor.

“We see assets exposed to Chinese growth as core strategic holdings that are distinct from emerging-market exposures. There is a clear case for greater portfolio allocations to China-exposed assets for returns and diversification, in our view, ” it says.

BlackRock notes China’s growth is on track to return to its pre-virus trend, just as it bounced back quickly in the post-Global Financial Crisis period. It also points out that China’s share of global gross domestic product (GDP) has been steadily growing even as its growth has slowly trended down as the economy matures.

Similarly, Schroders group argues that China remains the most interesting market in Asia.

In its “Outlook 2021: Asian equities” note, the fund manager’s head of Asian ex-Japan equity investments, Toby Hudson, says China may have lagged regional markets in the recent bounce, but it remains by far the broadest and deepest equity market in Asia.

“It offers a much more interesting range of stock opportunities, both in the mainland A-share market and in the Hong Kong SAR and US listed companies. Here, investors can get exposure to the full range of sectors and a steady flow of new IPOs (initial public offerings) that constantly refreshes the options available, ” Hudson explains.

According to Hudson, there is scope for further catch-up from South-East Asian markets in the near term after the recent bounce amid Covid-19 vaccine optimism.

“However, the choice of investment opportunities at the stock level remains limited. These markets are dominated by the ‘older economy’ sectors, which have less interesting longer-term growth profiles and this makes it unlikely we will become significantly more positive on them in the period to come, ” he says.

In general, Asia has seen a turnaround within markets following the positive Covid-19 vaccine news.

Those perceived as “lockdown losers” – such as travel, leisure, financials and energy shares – have rebounded the most sharply, while the earlier “lockdown winners” have lost momentum and lagged the market rally, Schroders notes.

“It does seem likely that in the coming months, Asian stock markets will see less of the polarised, ‘winner takes all’ performance that we saw earlier in 2020. A broader range of stocks and sectors will likely enjoy gains as investors chase those firms with more recovery potential, ” it argues.

One lockdown trend it expects to continue in Asia is the rise of e-commerce.

“Its penetration is unlikely to recede, as consumers are hooked on the added convenience of these services; the quality and scope of which continue to improve, ” Schroders says.

“Technology sectors more generally have also been winners this year from shifting consumer behaviour, and we are optimistic about the longer-term outlook for many of the main Asian players, ” it adds.

Schroders also expects the shift towards 5G telecommunications to continue in 2021.

“Chip makers are likely to benefit from rising prices for memory, after a downturn in 2019 and 2020. Meanwhile, the ‘digitisation’ of many areas of the economy will continue, which drives demand for increased processor power, bandwidth and storage, ” Hudson says.

Schroders reckons aggregate valuations for Asian equities have risen to above-average levels after the recent market strength. But it notes the trend is not unique to Asia.

“Valuations are clearly already pricing in a large part of the recovery in earnings expected in 2021. However, this is a global phenomenon rather than anything Asia specific, ” Hudson explains.

“Such optimism is not unreasonable, given the scope for a sharp snap-back in activity in the next few quarters, and the ultra-low level of interest rates and bond yields around the world, ” he adds.

Underneath the surface, valuations are actually very widely spread, he argues.

“This means that valuations in some of the sectors with strong momentum this year – notably selected healthcare, e-commerce, online gaming, 5G equipment, electric vehicle-related and other popular China A-listed shares – are much more stretched. Meanwhile, many other areas remain more reasonably valued, ” Hudson says.

Meanwhile, he points out that the strong flows and performance of new IPOs in Hong Kong and South Korea give some cause for caution. So too does the high level of retail investor participation in these deals, and in market trading more generally.

“Although not yet at very worrying levels, this sort of widespread investor optimism leaves markets more vulnerable to disappointment, ” Hudson says.

Meanwhile, Nomura Research says it is positive on Asia’s economic outlook for 2021, projecting a GDP growth rebound to 8.1%, and a sharp reversal from the projected decline of 1.1% for 2020.

“The region is poised for a sharp growth cycle acceleration, aided by the wide distribution of vaccines (we expect between the second and third quarter of 2021 to mark the vaccine pivot point in Asia), a strong global growth rebound, reduced uncertainty, a strong tech cycle, a resilient China, inventory restocking and the lagged effects of easier financial conditions, ” the brokerage says.

“The recovery is likely to become more broad-based as the year progresses, with consumption and services gradually catching up, ” it adds.

According to Nomura, the region’s monetary policy punch should remain in place in the first half of 2021, but the central banks’ tones could gradually shift in the second half of the year. “Central banks are likely to hesitate to unwind their easy policies in view of vaccine uncertainty in the first half of 2021, negative output gaps, the risk of scarring effects, subdued inflation and no changes to US Federal Reserve policy, ” it explains.

“We expect further easing in Thailand, the Philippines and Indonesia (all by the first quarter of 2021), whereas policy rates are likely to be maintained elsewhere through 2021, ” it adds.

In the second half of 2021, with more vaccine certainty, Nomura says it expects a gradual shift in tone towards tightening to begin. 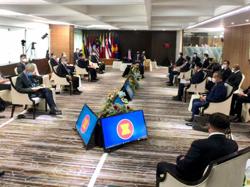