KUALA LUMPUR: The ringgit opened slightly firmer against the US dollar today, benefiting from the continued greenback weakness and potential extension of the Organisation of the Petroleum Exporting Countries’ (OPEC) output cut.

In a note today, Kenanga Research said the local unit’s uptrend might sustain against a backdrop of continued dollar weakness and higher crude oil price, should OPEC decides to extend the oil production cut at its meeting this week.

Over the past week, it said the ringgit surged further to its strongest level since Jan 24, 2020 as Parliament passed Budget 2021 with a voice vote at the policy stage, reducing policy uncertainty and political risks.

"The ringgit was also lifted by firmer oil price amid favourable COVID-19 vaccine developments,” it said.

On the technical front, Kenanga Research said according to the exponential moving average (EMA) technical indicator, the ringgit is expected to weaken slightly by 0.25 per cent to 4.079 as the US dollar attempts to reverse the pair trend.

"All in all, our technical analysis indicates a short-term bearish bias for the ringgit trend this week, probably due to potential profit-taking activities,” it said.

"Inversely, a rally towards the 4.061 level will invalidate the ringgit bearish pattern,” it said.

At the opening bell, the ringgit was traded mixed against other major currencies. 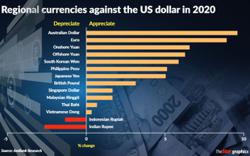