“However, we regard the 9M20 CNP as above market expectations, at 83% of the Bloomberg consensus estimate. The interim DPS of 13.5 sen was a positive surprise, as Maybank had previously stated that it would only revisit its dividend payments on the release of its 4Q20 financial results in Feb 2021, ” it said on Monday.

The research house is projecting a net profit of RM1.53bil for Maybank in 4Q20F, translating to a decline of 21.6% QoQ.

CGS-CIMB Research raised its FY20-22F core EPS forecasts by circa 2%, as it (1) change our assumption for a flattish loan base in FY20F (from a 1% decline in total projected previously), in line with the increase in its projected loan growth for the banking industry, and (2) reverse out the impact of a 25bp OPR cut that was expected for Sep 20 (and did not materialise).

With this, its dividend discounted model based target price for Maybank has increased from RM7 to RM8.07 following the roll-over to end-21F.

“Despite the expected decline in LLP in 4Q20F and FY21F, we retain our Hold call on Maybank as we are concerned about its weak net interest income, arising from margin contraction.

“Its valuation is reasonable as its CY21F P/E of 12.2 times is slightly below the five- year historical average of 12.7 times. We prefer Public Bank for exposure to the sector, ” it said. 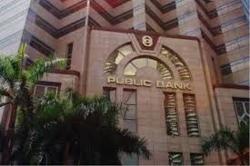