KUCHING: The construction of the main dam of the 1,285MW Baleh hydroelectric project in central Sarawak will start soon, according to Sarawak Energy Bhd (SEB).

“With the simultaneous completion of the diversion tunnels and the cofferdam construction in October, we are able to start the construction of the main dam, ” said SEB project delivery executive vice-president Pramod Kumar Karunakaran.

The river goes through the diversion tunnels to enable the closure of a stretch of the upper Baleh River.

Pramod noted that the construction of the closure berm or rock layer across the upper Baleh river would continue till the safe elevation of 71m in a month.

Once completed, the construction of the 188m concrete face rockfill dam will commence.

“The project is expected to employ 3,500 workers at the peak of construction works, ” he added.

The Baleh dam, which is SEB’s largest hydropower project to date, is estimated at RM8bil. It is due for commissioning in 2026.

The dam site catchment is expected to cover an area of some 5,625 sq km and will run to the Sarawak-Kalimantan border.

The project is divided into six packages, including the diversion tunnels which are the crucial components.

The other packages include jetties, roads and bridges, storage for explosive magazines used for rock blasting, an operator’s village, main civil, electrical and mechanical works.

The Baleh dam is located in the interior of the Hulu Rajang parliamentary constituency in the upper Rejang Basin, which is home to the 2,400MW Bakun dam (firm energy of 1,771MW) and 944MW Murum dam (635MW).

State-owned SEB acquired the Bakun dam from the federal government three years ago.

When the Baleh dam is operational, the three dams will have a combined electricity generation capacity of 4,540MW to power particularly the energy intensive industries in Sarawak Corridor of Renewable Energy (SCORE).

The energy from Bakun and Murum dams (pic) are supplied via the Sarawak grid to Samalaju Industrial Park, which houses energy-intensive heavy industries such as aluminium and ferroalloy smelting plants.The Baleh dam is to power Sarawak’s next wave of industrial development that includes a major steel plant in the region. 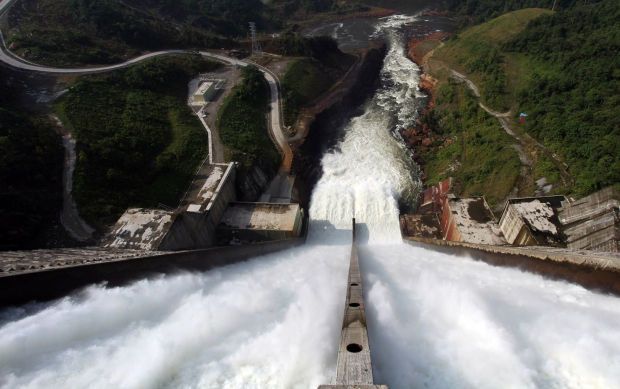 Murum dam, which started building in 2008, is now fully operational. The second largest dam in Sarawak is roughly 50 stories height and has one of the steepest spillway in the world. The 944MW power station was the first dam to be constructed as part of the Sarawak Corridor of Renewable Energy. - The Star filepic

Pramod pointed out that rest houses were built on the opposite banks of the river diversion tunnels with boat landing facilities.

“To balance the needs, the support from the government and communities has been crucial for SEB’s completion target for the diversion tunnels.

“This is also critical to meet the current commissioning target of the dam by 2026, ” he added.

Hulu Rajang MP Datuk Wilson Ugak Kumbong said as the country’s powerhouse, his constituency has the potential to light up the proposed new Indonesian capital in east Kalimantan.

SEB has been selling electricity to neighbouring west Kalimantan via the Indonesian power utility.

The company also plans to export power to Brunei Darussalam and Sabah.