Star Exclusive - The road to recovery gets bumpier

THE already bumpy road to economic recovery may turn bumpier as the headwinds blow harder.

The resurgence of Covid-19 cases is threatening the country’s path to recovery, raising concerns over the survival of businesses and the people’s willingness to spend.

While it is comforting to note that several high-frequency economic data indicate businesses in many sectors have begun to recuperate from the worst in the second quarter, experts cautioned that the outlook may get weaker going into the final three months of 2020.

A quick check on the Employment Insurance System portal by the Social Security Organisation’s (Socso) showed that the monthly loss of unemployment has consistently fallen from its peak of 18,579 individuals in June 2020 to 6,052 as of Oct 23.

However, Socso CEO Mohammed Azman Aziz told a news portal recently that the current third wave of Covid-19 infections had amplified uncertainties in the labour market. Survival factor: People working at a construction site in Kuala Lumpur. The current third wave of Covid-19 infections had amplified uncertainties in the labour market.

Economists generally concur that Malaysia’s economic performance in the third quarter of 2020, which will be unveiled on Nov 13, will be better than the second quarter. However, many experts predict third quarter 2020 growth to remain in negative territory, although at a smaller pace of contraction than the April-June period.

For context, the country entered into a technical recession in second quarter 2020, with a contraction of 17.1% year-on-year (y-o-y) – the worst quarterly gross domestic product (GDP) decline on record.

OCBC Bank economist Wellian Wiranto forecasts the economy to contract by 4% to 4.5% y-o-y.

“We have seen a fairly good uptick in some high-frequency indicators such as credit card spending and car sales up to August and September, which signal that consumer confidence has at least started to recover throughout the quarter.

“Going into the fourth quarter, however, things will unfortunately look a bit more cloudy, ” he says.

A key obstacle to the economic recovery momentum is the conditional movement control order (CMCO) that came into effect on Oct 14 in Sabah, Selangor, Kuala Lumpur and Putrajaya.

“The uptick in infections and resulting re-adoption of some restriction measures (albeit a lot less stringent and affecting only specific regions rather than nationwide) are likely to weigh on consumer confidence. Hence, our earlier expectation of zero growth in fourth quarter 2020 is at risk of at least some downgrade, especially if the situation does not improve into November, ” adds Wellian. 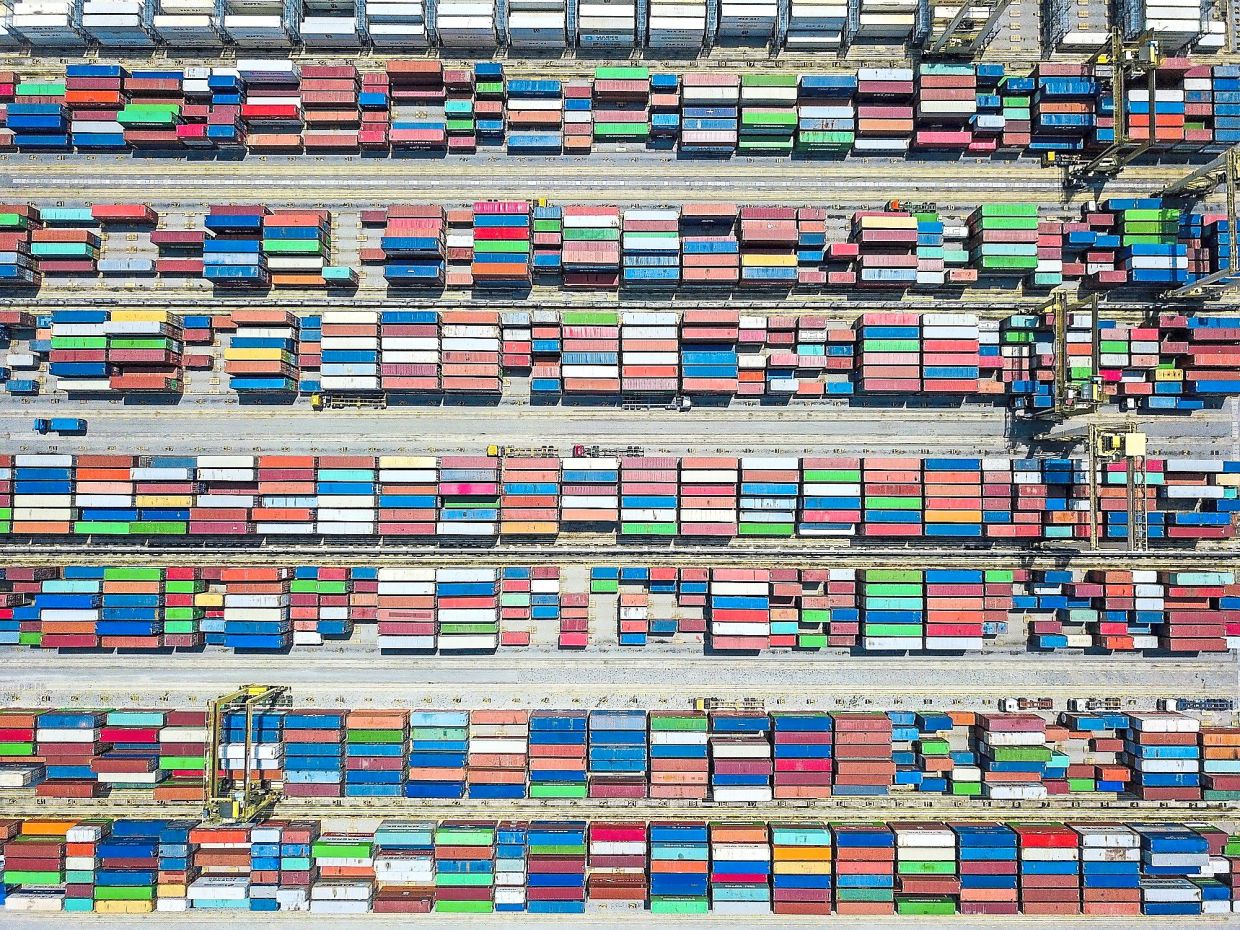 Higher exports: For September, Malaysia’s exports expanded by 13.6% to RM88.93bil as shipments of manufactured products jumped.

“These states (under CMCO) contributed 46.6% to the economy in 2019, thus any consequence on industries’ activities within these areas will have an impact on the overall country’s economic performance.

“Nevertheless, the targeted CMCO is seen as the best approach to mitigate the effects of the pandemic and to regain the economic recovery momentum, ” he says.

He points out the first two waves of Covid-19 had a severe impact on sectors such as accommodation, construction, transport and storage as well as motor vehicles, as output slumped by more than 40% during the second quarter.

Other badly hit sectors that contracted by 20% or more are wholesale and retail trade, mining, food and beverage, and real estate, business and other services, he says.

“The manufacturing sector, which slumped 18.3% in the second quarter, has recovered, with the output expanding by 2.9% in July and 2.4% in August. 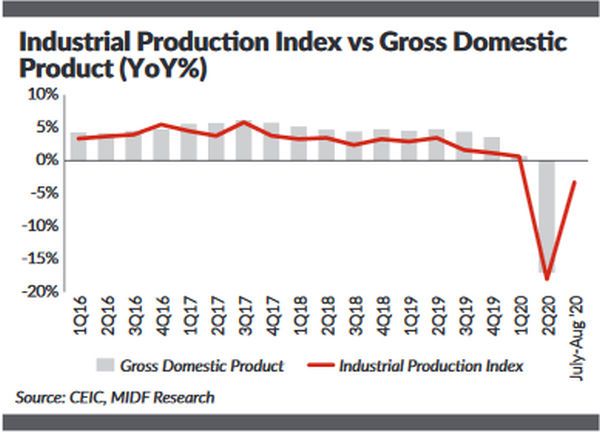 “However, reflecting the weak recovery, industrial output growth weakened from 1.2% in July to 0.3% in August.

“The soft economy is mirrored by the continuing contraction in wholesale and retail trade at negative 4% in July, improving slightly to negative 3.4% in August, ” he says.

While Yeah thinks macroeconomic headwinds have eased in the third quarter, he cautions that they are gathering speed in the fourth quarter.

“The third coronavirus wave is expected to stall but not derail the recovery momentum unless a prolonged nationwide lockdown recurs, ” he adds.

“On the external front, the re-acceleration in Covid-19 infections in Malaysia’s major trading partners such as the US and Europe and some countries in Asia, with the exception of China, are expected to dampen demand for our exports if these countries impose tighter movement restrictions or a total lockdown, which would curtail consumer spending, ” he says.

For the month of September 2020, Malaysia’s exports expanded by 13.6% to RM88.93bil, far exceeding a Bloomberg survey of a 1.7% increase, as shipments of manufactured products jumped.

In comparison, exports in August declined by 2.9%. The latest export value was the highest ever recorded for the month of September. In fact, the export growth in September was also the strongest since October 2018.

“The scale of the upside surprise tells us that the manufacturing sector (which can remain open during the CMCO) has exhibited considerable strength, and should help to counter the hit on consumer and business confidence.

“To that end, the sub-sector of electronics exports appear to have been driving the uptick as well, benefiting from the recovery in tech cycle and also stocking-up activities, ” according to OCBC Bank’s Wellian.

The LI has registered a fourth consecutive month of positive growth, with 7.6% growth in August, supported by improving confidence and sustained expectation in future sales.

MIDF Research says the sustained increase in LI suggested that the recent recovery will continue in the months to come, despite the downside risks. The LI is a predictive tool used to anticipate upturns and downturns in the economy.

Business not as usual

While the domestic economy has been gradually recovering, most businesses regardless of their size are still operating below their pre-Covid-19 levels.

Channel checks by SERC indicate that small and medium enterprises (SMEs) are still concerned about 3Cs or cash flow, cost and credit, especially for those operating in the hard-hit businesses such as retail, trading and tourism-related.

In the event the current third wave of infections prolongs with a movement restrictions wider in scale, SERC’s Lee says SMEs would have to endure a longer period of recovery and may even face a more severe cash flow difficulty.

“SMEs still need some form of assistance and relief to ease their financial burden. These include the extension of a wage subsidy programme to reduce operating cost and retain employees, tax rebate on rental payment, electricity tariff discount and exemption of foreign workers’ levy.

“On the taxation system, a reduction in the income tax rate, further deferment of tax payments or allowing the payment of the tax balance for year of assessment 2020 and 2021 in three monthly installments would provide a much-needed respite, ” he adds.

The continued challenging operating environment for businesses would have an unfavourable impact on the job market.

With the reimposition of CMCO, which includes the populous Klang Valley areas, Yeah believes that job creation will remain anemic.

“Most firms, with the exception of a few industries such as personal protective gear and medical equipment, e-commerce as well as information and communications technology that are experiencing sustained domestic and export demand, may focus on business consolidation and restructuring, ” he says.

“However, we are of the view that the worst should be behind us now as we can see from the more recent stabilisation in unemployment rate to 4.7% from 5.3% earlier this year.

“Alongside the continued recovery in the economy overall, and some more resilient sectors like manufacturing specifically, we ought to see some relative improvement in the months ahead as well, ” Yeah said.

Looking ahead, the impact of the Covid-19-induced pandemic will be here longer than expected, even if economic activity inches closer towards pre-pandemic levels.

According to SERC’s Lee, the pandemic has taken a toll on poorer and the more vulnerable segments of society.

“It worsens the income inequality and widens the gap between the rich and poor.

“Some jobs were permanently lost and there is diminished employment prospects. Unemployment is a lagging indicator of the overall economy, ” he says.

“Bear in mind that private consumption represents about 55% of the economy.

“We need people to spend and that would result in a multiplier effect that speeds up the economic recovery, ” he says.

Considering the current need to further inject cash directly into consumers’ pockets, Manokaran suggests the government allow EPF members to withdraw the dividend they received in 2019.

“By allowing the person to withdraw the RM5,450, it acts as an indirect stimulus as the money would eventually be spent. At the same time, the members’ contribution to EPF will not be affected, ” he says.

Given the limited fiscal space, Manokaran points out that there was not much avenue for further cash injection by the government without affecting the budget deficit level.

“We expect the budget deficit to GDP to hit 7.2% in 2020 and potentially even higher in 2021, given the need for further stimulus. The continued rise in budget deficits may result in ratings downgrade for Malaysia, ” he says.