Scientex Bhd has bought eight land parcels of 202.2 acres in Pulai, Johor Baru for RM185.01mil in tandem with its efforts to build more affordable houses.

has bought eight land parcels of 202.2 acres in Pulai, Johor Baru for RM185.01mil in tandem with its efforts to build more affordable houses.

Its unit Scientex Quatari Sdn Bhd entered into a sale and purchase agreement with the Singapore-incorporated Lee Pineapple Company (Pte) Ltd to acquire the freehold land.

Scientex, which is involved in packaging manufacturing and property development, told Bursa Malaysia that the proposed acquisition will be funded by internally generated funds and bank borrowings.

The deal is expected to be completed in the first half of 2021.

According to Scientex, the close proximity of the land parcels to its existing developments will deliver operational efficiencies and generate better margins through economies of scale.

Scientex added that the landbank expansion was in line with its goal to complete 50,000 affordable homes throughout the nation by 2028.

“The land is expected to provide a steady and sustainable property development model as Scientex group continues to focus on landed affordably priced properties which demand has remained firm and resilient, ” it said.

In a separate development, Scientex’s share price closed at an all-time high of RM9.90 after analysts saw better prospects for this group ahead.

This is based on additional capacity increase in FY21 and stable earnings growth from the company’s property segment as the group is active in the affordable homes market. 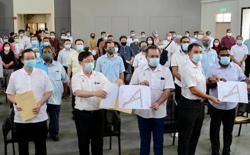 Land for houses of worship