“Overall, we are confident that the gradual improvement in local demand and consumption, supported by the government’s stimulus packages, will further boost volume, ’’ said Che Khalib.

LOCKDOWNS everywhere had impacted volume at ports, as trade activities took a beating.

However, volume is recovering with the resumption of surrounding businesses and factory operations.

Along with this gradual recovery, MMC Ports, the largest port operator in Malaysia, is aggressively promoting its ancillary services and optimising operational costs to cushion the downward pressure from volume reduction.

Among its other divisions, MMC Engineering remains a stable contributor to group revenue, while energy and utilities, which remained operational during the movement control order (MCO) period, continue to sustain their contribution to the group.

Total cash and cash equivalents for the group stood at RM2.45bil as at March 31.

“We have sufficient cash to meet all operational and financial needs; the ports and logistics segment is expected to continue supporting the group’s cash generation.

It has over 2,000 acres of landbank within Flagship E of Iskandar Malaysia, and continuous unlocking of its value will contribute to substantial cashflow for the group.

Expansion projects that can be deferred without compromising service quality, are being reviewed and modified based on a cost-benefit analysis.

In terms of container volume, MMC Ports recorded a minimal year-on-year reduction which was slightly more for conventional volume.

Since May, export and import activities at MMC’s ports have been on an uptrend; Johor Port benefited from the resumption of manufacturing companies in Pasir Gudang while Penang Port is receiving higher container flow from southern Thailand as the border is reopened.

Transhipment activities are expected to pick up especially with the recovery in the Chinese economy, where improving trade activities coupled with a higher vessel load factor, are seen.

PTP, which is a transhipment hub, was able to maintain a reasonable level of terminal utilisation during the lockdown period, with an increase in demand for storage space.

PTP is working closely with liners on consolidation of cargo and is offering flexibility during peak and off peak hours.

Terminal utilisation at PTP is expected to improve as construction activities pick up.

Dry and liquid bulk volume has picked up since May, on higher local consumption and demand for commodities such as maize, rice, sugar and petroleum products.

“Overall, we are confident that the gradual improvement in local demand and consumption, supported by the government’s stimulus packages, will further boost volume, ’’ said Che Khalib.

There has been an increase in the number of calls by ultra large container vessels (ULCVs) at PTP in the first five months of this year compared with the same period last year.With eight new quay cranes, more calls by ULCVs are expected at PTP where more efficiency-driven applications and advanced equipment will be deployed.

The terminal operating system at PTP has been upgraded with the new Navis N4 system, while a mobile application that encourages performance delivery and tracks real time progress of individual performance, was also launched.

The ongoing container yard improvement at Johor Port will be able to support a minimum container volume handling of one million twenty-foot equivalent units (TEUs) per year, a milestone which was reached last year.As of March, Johor Port handled 0.25 million tonnes TEUs.

The outlook is cautious on Northport which recorded the highest conventional volume for the past five years, as China’s inbound volume had deteriorated due to the closure of many factories, causing cancellations among carriers in the first quarter.

With volume rebounding for the next quarter, Northport is expected to contribute positively to group revenue, possibly similar to that last year.

Since taking over the operations in the northern section of the Jeddah Islamic Port, the Red Sea Gateway Terminal, which is MMC’s port in Saudi Arabia, will expand its terminal handling capacity from 2.5 million TEUs to 5.2 million TEUs by 2023.

Major clients including the Maersk group, Mediterranean Shipping Co, Evergreen Marine, CMA CGM, Wan Hai Line and Cosco group, have remained with the group during the MCO period as ports continued to operate as an essential service.

MMC’s ports are connected to more than 300 ports of call with more than 181 weekly services.

In terms of competition with Singapore, it aims to create a conducive business environment; with its land resources, it can launch more warehouse services to address congestion issues.

This was especially during the Covid-19 period when many customers were looking for space to place their empty containers, and to undertake long-term storage of their cargoes.

With MMC Engineering’s order book of RM6.29bil expected to last until 2022, it is pursuing contracts valued at RM4.4bil over the next 12 months.

During the MCO, tunneling works for the KVMRT Sungai Buloh-Serdang-Putrajaya line, were allowed to continue, with measures to mitigate issues related to delays in work-in-progress.

A delay in the supply of some construction materials was caused by the closure of some non-essential factories.

Among MMC’s companies, there was huge demand for sanitisation and disinfection services by Alam Flora especially in the Kuala Lumpur, Putrajaya and Pahang regions.

The volume of gas sold was impacted by Covid-19 but Gas Malaysia, which operates and maintains 2,468km of gas pipeline, will still contribute positively to the group.

Malakoff, which owns a generation capacity of 5,822MW, is well-placed to expand further when bids for future large scale solar projects are called, having secured biogas and small hydro projects.

Expansion projects that are being reviewed include the ongoing expansion of terminal capacity at Senai International Airport in Johor Baru, and expansion of the Swettenham Pier Cruise Terminal in Penang Port.This is based on an expected contraction in their respective industry volume this year.

While ensuring a stable revenue, MMC is also now better prepared for any second wave of the Covid 19; during the recent lockdown, it had put in place measures to enhance the safety and hygiene especially of its 15,221 strong workforce.

As an international player, it looks forward to countries, upon recovery, playing their part to bring up world trade and the global economy.

The views are the writer’s own 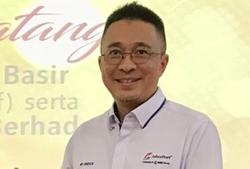