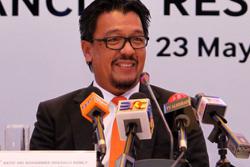 and Ikhmas Jaya Group Bhd, according to JF Apex Research.

Jerasia Capital is venturing into the healthcare industry using its production lines to produce personal protection equipment (PPE) for both local and export markets.

Dialog is pumping another RM100mil into its Johor-based Dialog Terminals Langsat facility, which will enable it to store a further 85,000 cubic metres (m3) of clean petroleum products. The plant currently has an operating capacity of 770,000m3, which has been fully leased out.

Boustead Holdings’ subsidiary Boustead Naval Shipyard Sdn Bhd (BNS) has been served with a winding-up petition over an alleged debt of RM56.04mil.

The petition was filed by MTU Services (Malaysia) Sdn Bhd which claimed that BNS is indebted to the former for the equipment supplied and services provided to BNS.

On Friday, European stocks declined as concerns over new coronavirus cases overshadowed positive economic data from the US, China and Europe.

US markets were closed on Friday for Independence Day holiday.

“Following the negative sentiment in Europe, the FBM KLCI could see profit taking and pull back with support at 1,515 points,” JF Apex said.