NEW DELHI: Credit scores of several Indian shadow lenders were downgraded by S&P Global Ratings due to liquidity risks amid an economic downturn brought on by the pandemic, triggering a drop in some of their bonds.

Power Finance’s dollar bonds due 2029 and Shriram Transport Finance’s notes maturing 2022 fell about two US cents on the dollar yesterday to 99.8 US cents and 92.8 respectively, the biggest decline in two months, according to Bloomberg-compiled prices.

“Liquidity stress could be high for wholesale lenders with large exposure to property developers, companies without a strong parent, or companies with perceived weak governance, ” S&P analysts said in the report. “Credit risks remain very high for finance companies in India.”

The world’s strictest stay-at-home measures to contain the pandemic have put the nation’s business and investment activities in a deep slumber, adding to risks for shadow lenders who give loans to everyone from small merchants to tycoons.

S&P sees a 5% contraction in Asia’s third-largest economy in the 12 months to March, which would be the first in more than four decades.

Moody’s Investors Service also warned this month that the stress among the lenders may be deeper and broader than it thought.

The nation’s shadow banking industry had already been facing strains since 2018, when the shock failure of financier IL&FS Group led to broader sector scrutiny.

While non-bank financiers have to extend a moratorium to their borrowers after the central bank allowed stressed businesses and consumers more time to repay loans, they have debt obligations to repay. — Bloomberg Insight - Truth is the first casualty of pandemic finance 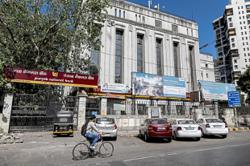