Source of income: Mobile telecommunications tower with antennae and electronic communications equipment. Spectrum, which is literally made up of airwaves, is also a valuable resource of governments around the world.

THIS week, the telecommunications sector was abuzz. News broke that the much-sought-after 700MHz spectrum had been awarded.

The award had been done on the quiet, only being placed on the website of the Malaysian Communications and Multimedia Commission (MCMC).

News articles surfaced about it and that it was given to a few parties including one which was little known, namely Altel Communications Sdn Bhd.

However, a day after that news broke out, the minister in charge changed his decision, cancelling the awards.

It is still unclear what led to the awards and the subsequent cancellations.

The spectrum that was initially awarded can be used for the roll out of the all-important 5G telecommunication networks.

But speaking to the StarBizWeek, Communications and Multimedia Minister Datuk Saifuddin Abdullah explains that perhaps 5G is not the priority now.

“For now, the main focus is not on 5G. I am not saying that 5G is not important. But I don’t think the priority is to roll out 5G now. The priority is to make full use of the 3G and the 4G (networks) and ensure full connectivity because that is what is required, ” he says.

“Is 5G important? Yes. Are we going to roll out? Yes. Are we going to use all our resources to roll out today? No. Because today, what is important is to make full use of whatever broadband that we have – fixed and what not, and we are also looking at satellite technology. So we really have to go full gear in ensuring connectivity. That is our first priority, ” he adds,

Whatever the case, to telecommunication companies, spectrum is like golden resource. The more they have it, the more services they can roll out, the most customers they can reach and so on. Spectrum, which is literally made up of airwave, is also a valuable resource of governments around the world. 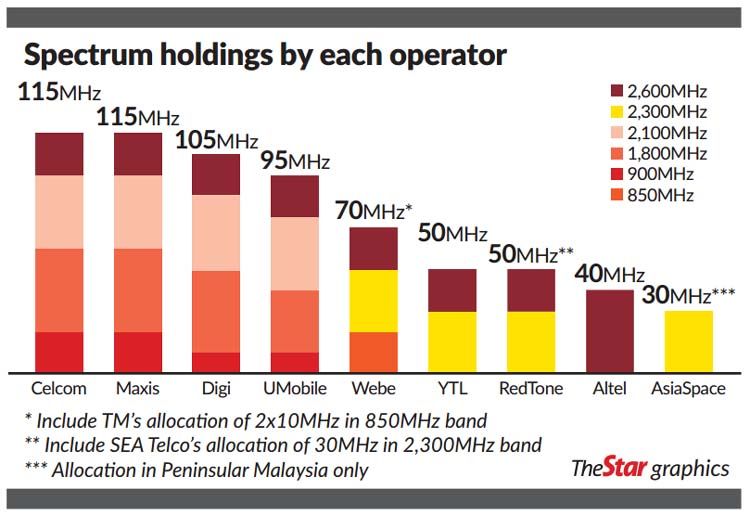 In recent years, the focus has been on the 700MHz band. It is akin for example to a prized “beachfront” real estate that developers would like to get their hands on.

This band only became available last year, after a process of signal migrations mandated by the government. The world over, governments have sought to migrate parties who have been using bands like the 700MHz for analogue signals. These are typically the older radio and television companies, and Malaysia is no different. Freeing up the spectrum took a few years and was completed last year.

The knowledge that the 700MHz would be freed up and dished out to telco’s has been known for quite a while already.

Going back a few years, a local telco made a lot of effort to try and secure the entire 700MHz block.

Naturally, this led to an industry outcry and that monolpolising effort did not materialise.

The government is likely now to slice up the spectrum block and dish it out to various players, thereby increasing competition in the market.

But the lobbying for 700MHz never stopped since then as every player wants a slice of this prized spectrum.

The recent saga on the award of the spectrum took place like this: On May 15 the Communications and Multimedia Ministry issued three Ministerial Directives.

After public inquiry last year, MCMC in its final report in January, said these bands are identified as pioneer spectrum bands for the roll out of 5G networks in Malaysia. The spectrum will be allocated to a consortium with multiple licensees instead of individual licensees via a tender process to prevent duplication of infrastructure costs.

In the recent awards, one commonality was that Altel appears to be the biggest beneficiary as it got a slice of all the bands.

Furthermore, there was no public announcement made after the directive was issued as it was placed in the legal section of MCMC’s website.

This is odd given that 700MHz is a major telecommunications spectrum band and in the past any such allocations were accompanied by announcements.

It was only discovered about two weeks later when media reports highlighted the awards.

Not surprisingly, the matter sparked a debate as to why the need for a direct award and what was the basis of selection of recipients.

Some governments have sought to tender out valuable spectrum, and decide on awards either based on the most suitable party or on the highest bidder.

“Why was this decision not announced, considering how important it is, ” asks an industry player.

Since then, the minister cancelled the directive.

Saifuddin said 18 instruments including the directive and findings regarding the usage of spectrum frequencies in the 700MHz, 900MHz and 2600MHz had been presented to him.

“Based on technical issues, the law and the need to follow a clear process, I have ordered MCMC to cancel the directive and the instrument again as soon as possible, ’’ he said in a statement.

To recall, under the award the minister had given, the three big players – Celcom Axiata Bhd, Digi.com Bhd

– were allocated 2x10MHz of the 700 MHz band. Both Telekom Malaysia Bhd

and Altel were allotted 2x5MHz each. Left out of any slice of the 700MHz were U Mobile and YTL Communications.

The rest of the 2600MHz block was shared by Celcom, Digi, Maxis, U Mobile and Redtone Engineering & Network Services (all allocated 2x10MHz each) while TM (via Webe Digital) and YTL got 1x20MHz each.

Of these bands, it is the 700MHz that is likely the most valuable.

Explains an industry player: “Simply put, if you have a lot of this band, your network cost comes down and performance goes up’’.

It remains unclear why the minister changed his mind. Perhaps as the minister said, the focus should now be on connectivity with whatever available spectrum and infrastructure there is.

However, some question if the minister knew the full implications of the awards or whether he was ill advised. Others wonder if there were other forces at play.

Whatever the case, the incident points to a flip flop in decision making.

Prior to this fiasco, the market was also speculating that the entire block was to be given to TM and TIME Dotcom Bhd

. When that blew off, talk surfaced that TM and Altel was to get the entire 2x45MHz of the entire 700MHz block and even that fizzled off.

On the recent development, Kenanga Research points out: “Retracting the 700MHz spectrum assignment would for now return the industry to the drawing board in the deployment of the national 5G network.’’

However, an executive in the know who declined to be named said: “The minister was advised on the allocation. He also did get views from various parties but to get a full picture of the industry takes time. He made the decision to allocate based on what he was advised.’’

“After the directive was issued, the public announcement was supposed to be issued by the regulator, which was delayed for some reason, ’’ the executive said.

Sources say that since the directive, Saifuddin was inundated with calls from industry players and others and there were obviously some disgruntled players.

“The contention is also really about Altel being given so much spectrum. The directive also sent U Mobile fuming and naturally some lobbying happened as they have over 1,000 sites, yet they are not considered for the 700MHz band.

“Even TM is at a loss as it getting such a small allocation. What can it do with 2x5MHz, ’’ adds another industry executive.

Some players in the industry are also not in favour of a single consortium for 5G deployment and it would be tough.

“While at it, the minister should also do away with the concept of a single consortium for 5G. It will not work and it has not worked efficiently in the past unless the government is going to guarantee equal access for all, ’’ says an industry player.

Kenanga Research says the “emergence of Altel was a surprise to us, as we would have placed our bets on U Mobile if individual allocation was to be offered, with it being the fourth largest celco operator.’’

In the past, spectrum has been awarded in various ways. However, some parties who received spectrum, instead of building networks, leased it to other players for a fee.

That is why some governments prefer to auction spectrum to avoid non-serious players from bidding. There are the disadvantages of bidding as it may drive cost up but it will keep only serious players in the game.

Several years ago, Britain auctioned its 3G spectrum to the highest bidder and earned big bucks for it. Several other countries have since followed the precedent. Malaysia has often not charged exorbitant amounts for spectrum awards.

But since the 700MHz is a valuable band, experts believe there should be a premium put on it.

Of course, there will also be yearly payments for usage of the spectrum.

The other issue that often crops up is not all players have the same amount of spectrum. That is why a proper study needs to be conducted to ensure that only players that built networks get spectrum and not rent seekers, he adds.

Kenanga Research says whether it is a consortium or individual telcos, the awardee(s) would have to bear the brunt of spectrum costs and incur higher capex spending to build the necessary infrastructure for the new network.

“By the looks of things, we would not be surprised if the readiness and commercialisation of the network are delayed towards 2021 (from the initial target of third-quarter calendar year 2020). The deferment of the timeline could be partly faulted on the Covid-19 pandemic and movement control orders, ’’ Kenanga says.

The whole fiasco about the directive points to lack of transparency and overall governance issues, experts says.

“When policy decisions are easily influenced or backtracked/changed so frequently, it affects investor confidence and makes any planning for capex untenable. It does not bode well for foreign investors, ’’ says an executive.

But more alarming is the fact that some of the recipients of the spectrum listed under the directive were listed companies which are obliged to make announcements to their shareholders and Bursa Malaysia.

“But none made any announcement from the time the directive was signed. It can be a breach of investor confidence. Even though some claim they did not get anything in writing from the regulator, the directive was posted on the website for all to see, ’’ says an executive.

But some players claim, the directive is just the first step and they need to be notified by the regulator before they can announce anything. Afterwards, they will need to do business plans before they can be assigned the spectrum.