is disposing of five parcels of adjoining lots of land measuring 53,354 sqm and two factory buildings in Seberang Prai, Penang, for RM22mil to fulfil its immediate cash flow requirements.

"The Proposed Disposal will enable Heng Huat to use the proceeds to mainly repay its bank borrowings and enhance its working capital to facilitate its operating activities.

"The reduction of its bank borrowings will enable Heng Huat to reduce its gearing, improve its future borrowing ability and improve its cash flow position," it said in a filing with Bursa Malaysia.

According to the filing, the group's sub-subsidiary HK Kitaran Sdn Bhd entered a sales and purchase agreement with SBJ Property Sdn Bhd to dispose of the property at a RM6mil or a 21.43% discount to its market value, as appraised by a valuer.

According to Heng Huat, the trade dispute between China and the US as well as the Covid-19 outbreak have impacted its manufacturing operations and financial performance.

The group also revealed that its request for a six-month moratorium on borrowings has been rejected by a financial institution. Of the proceeds from the disposal, RM11.7mil will go towards repaying the borrowings.

This will leave the group with borrowings of about RM23.1mil, of which it has managed to secure a six-month deferment from other financial institutions.

Meanwhile, the remaining proceeds from the disposal amounting to RM10.3mil will go towards the group's working capital.

"The Board is of the opinion that the discount is justifiable and had agreed to the discount after having considered the immediate cash flow requirements of the Heng Huat Group for the repayment of bank borrowings and to fund its working capital," said the group.

It added that no other potential buyers for the property had been found while the transaction value of the Penang property market had decreased 15.3% in 2019 compared to 2018. 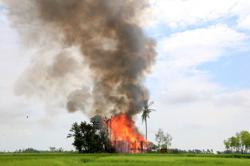