KUALA LUMPUR: The government's Economic Action Council (EAC) has started work on post Covid-19 recovery plan and it is engaging various stakeholders to come up with a draft plan to be released in a couple of weeks.

Minister in the Prime Minister's Department (Economy) Datuk Seri Mustapa Mohamed said this was to ensure it was ahead of the curve post Covid-19 after it t was thrown a curveball with the pandemic and the severity of the disease.

"Post Covid-19 will be a new world and a new Malaysia, where there will be a lot more video conferencing, people working from home and more people will be cautious of their health.

"Consumer habit will change where there will be more digitalisation and e-commerce, ” he said, adding that Malaysia would continue to do well but it needs to be ahead of the curve by making some fundamental changes.

Mustapa said, the government has learned many things and identified areas of weakness that it could improve on such as a database on the micro-enterprises such as street hawkers, which made it difficult for the government to help them in this situation.

Furthermore, he said the pandemic has also brought to light some weaknesses in terms of digitalisation despite the high broadband penetration in the country.

"We have begun to see some weaknesses here and there. For example, in terms of e-commerce and digitalisation, we are far behind. We need to be more aggressive, ” he said.

Mustapa said it has been a tough one month for the new government as they had to be on the roll straight away from day one, juggling between mitigating the economic impact of the COVID-19, maintaining public health and declining global oil price.

In the official twitter account of his communications team yesterday, it said the minister was burning the midnight oil at the Economic Planning Unit (EPU) to attend the Ninth (Extraordinary) Organisation of the Petroleum Exporting Countries (Opec) and non-Opec Ministerial Meeting via teleconference.

"The escalation of supply and downturn in demand in recent weeks have startled global oil markets. Hoping for a peaceful resolution, ” he tweeted.

Mustapa said the teleconference meeting, which began at 11pm on Thursday finally ended at 8.30am on Friday, was probably the longest he has ever attended. - Bernama 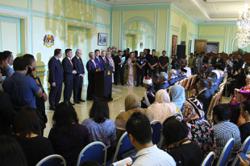