The 50-member Hang Seng Index now trades at 99% of book value, a level only seen twice before in data compiled by Bloomberg going back to 1993.

HONG KONG: A month into one of the fastest global market meltdowns in recent history, investors aren’t willing to pay more than liquidation value for stocks in Hong Kong.

The 50-member Hang Seng Index now trades at 99% of book value, a level only seen twice before in data compiled by Bloomberg going back to 1993.

That means traders are pricing firms’ assets at less than than their stated worth, something that last happened in 2016. The gauge last week entered its second bear market in as many years.

The prospect that the virus outbreak may send the global economy into recession is adding to the fragile sentiment in Hong Kong, where the economy was already on a downturn due to last year’s protests.

The city’s stock market may also be paying the price for being highly liquid and widely owned, making it vulnerable to volatility shocks in the US or Europe.

“The market will remain super volatile in Hong Kong – the outlook is so uncertain.”

After a 4% slump to start the week, the Hang Seng Index was relatively steady yesterday as US stock-index futures jumped. Investors in Hong Kong have been boosting their hedges and preparing for further losses, with short selling on Monday accounting for about 18% of total turnover on Hong Kong’s main board.

That’s the highest proportion in more than six months.

About half of the companies listed on the Hang Seng Index trade below book value, with Swire Pacific Ltd – which controls embattled airline Cathay Pacific Airways Ltd. -- the cheapest with a ratio of just 0.31.

Internet giant Tencent Holdings Ltd remain expensive with a price-to-book ratio of almost 7.3, though that’s still down from a February high of 8.9.

In 2016, Hong Kong stocks fell below the value of their net assets amid concerns over capital outflows and China’s economic slowdown. But reaching the milestone could also signal that the worst may soon be over for Hong Kong: when it happened in 2016, the index went on to rally about 80% in two years.

The Hang Seng measure’s relative-strength index remained below 30 for a fourth day Tuesday, a signal that selling may have gone too far and too fast.

“It suggests that the Hang Seng Index is close to bottoming, ” said Daniel So, a strategist at CMB International Securities Ltd. “The price-to-book ratio at crisis levels tells a lot about how cheap stocks are right now.” - Bloomberg 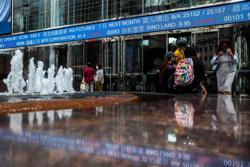 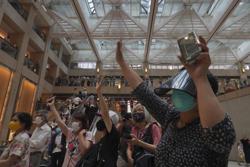 China warns US it will retaliate on moves over Hong Kong; asks state firms to halt purchases of US soybeans and pork