Media Chinese International Ltd (MCIL) and Rimbunan Sawit Bhd (Rsawit) saw their shares transacted in off-market deals on Friday, which were significantly below their closing prices on Thursday.

(Rsawit) saw their shares transacted in off-market deals on Friday, which were significantly below their closing prices on Thursday.

Stock market data showed that 39.4 million shares of MCIL were transacted at eight sen each, or 13 sen below the closing price of 21 sen on Thursday.

The shares accounted for 2.3% of the issued shares of 1.687 billion units.

As for plantation company RSawit, there were 25.95 million shares traded off market at 16 sen each or 14.5 sen below Thursday's close of 30.5 sen.

MCIL and RSawit have some common shareholders. MCIL is a publisher of Chinese-language newspapers in Hong Kong, Malaysia, the US and also Canada and China.

He is the chairman of MCIL and also the founder and chairman of the Rimbunan Hijau Group, a timber company which owns 0.92% of MCIL.

Tiong is the executive chairman of Rimbunan Hijau Group. 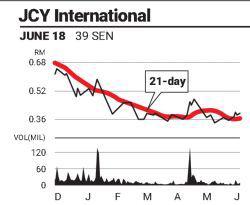