What now for Bumi Armada?

Things were beginning to look up for BUMI ARMADA BHD

after it refinanced some of its debts and returned to the black in the third quarter ended September last year (3QFY19).

The oil and gas services provider saw a run-up in its share price in 2018, driven by the operational recovery in the Armada Kraken vessel, which had faced numerous operational hiccups previously. Its more stable operations would partially help reprieve debt obligations, according to analysts. 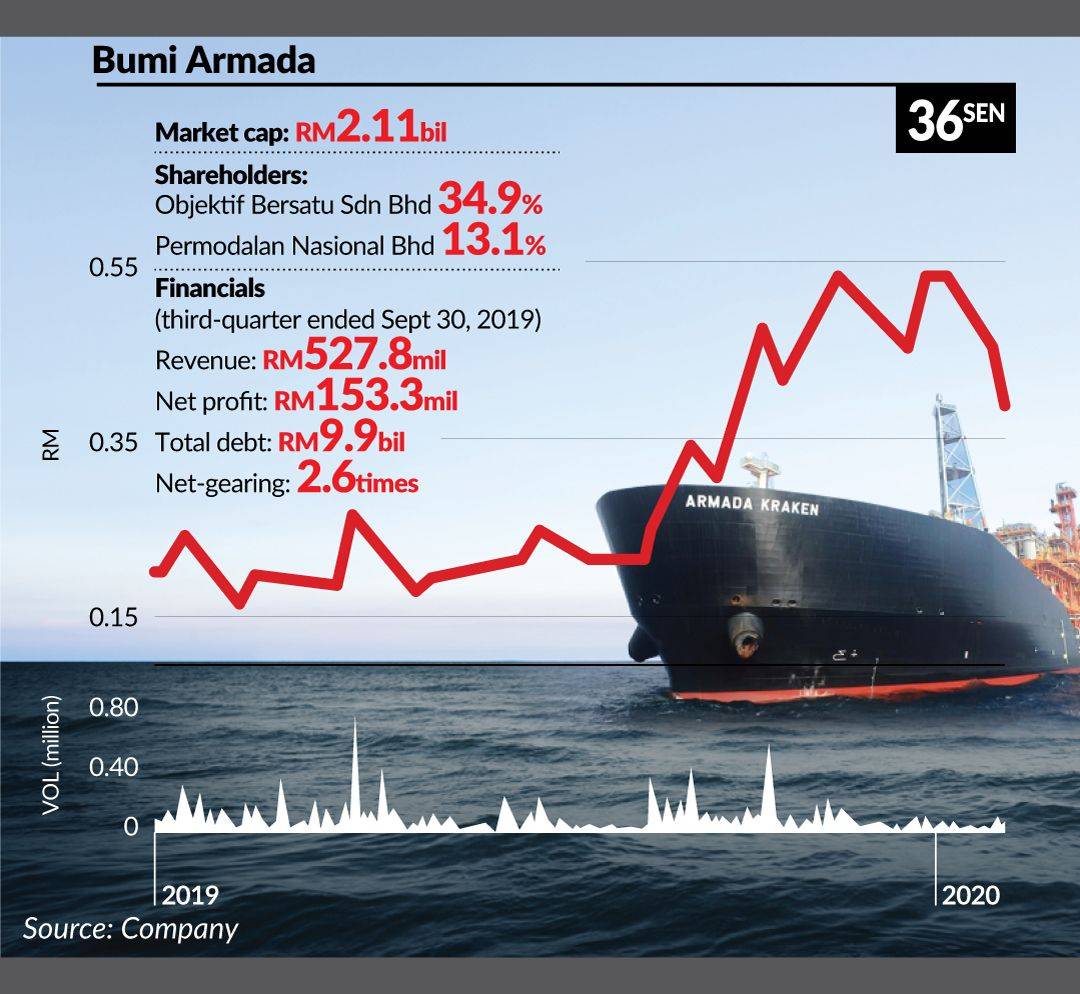 Alas, during the Chinese New Year season that just passed, it suffered a double blow.

Firstly, the Employees Provident Fund (EPF) is no longer a substantial shareholder after paring down its stake to below the 5% level, a Jan 21 filing with the local stock exchange showed.

Analysts were earlier expecting a favourable outcome and possible compensation of US$280mil (or over a RM1bil) from this court case, which could have gone to paring some of its high borrowings level.

Of the two developments, the ceasing of EPF as a key shareholder could dampen short-term sentiment if the fund sells more shares, says an analyst.

in which the fund was a major shareholder.

While this amount is not much relative to company’s paid up capital, its creating an “overhang” effect whereby investors turn cautious and subsequently selling off too.

In this week alone, the share price has slide 13% to 36 sen at the time of writing.

From the start of the year, that is about one-third of a fall in value.

One of Bumi Armada’s ongoing concern is its high debt, which stood at RM9.9bil as at end-September (3QFY19) with a net-gearing of 2.6x. With the unfavourable outcome of the Woodside case - seen earlier as one of the more hopeful avenues of raising cash to bring down its loan obligations - what options do Bumi Armada have now?

Several, according to analysts. One is by selling more assets, as it did recently.

The company’s offshore support vessels (OSVs), for instance, is only 58% utilised in the 3QFY19.

According to one report, the company’s 32 OSVs could fetch around RM286mil or US$68mil, while the disposal of Armada Claire, which is idle at the moment, could fetch an estimated US$100mil.

For now, some analysts think that the company has the ability to repay debt when they fall due. This is based on its improving cash flows following the operational recovery of Armada Kraken FPSO. Moreover, its joint venture with ONGC of India (in which it has a 30% stake) should get off the ground in about two years, notes Kenanga Research.

In the event these are insufficient, the research firm says other options are paring down stakes in current FPSO projects or undertake an equity fund raising. But the latter could be tough in the current weak market, say analysts.

In the meantime, Bumi Armada said it was considering possible grounds of appeal on the wrongful termination of Armada Claire, which must be made filed by Feb 14.

But the more immediate issue is whether there is a possibility of a further writedown of the Armada Claire in upcoming 4Q19 results.

In 2QFY16, following the notice of termination of its charter contract, Bumi Armada wrote down the value of the asset to RM473mil from RM1.04bil.

“There was no further disclosure beyond this, but we believe the carrying value should be lower than RM473mil now, as four years have passed since that time, ” says CIMB Research in its report.

If the company cannot find a buyer or a new charterer for the vessel, the auditors will require an annual impairment testing, says CIMB Research.

“So it is still possible that the vessel will be impaired again during the 4QFY19 results announcement, which should be released by the end of February, ” it writes.

In the 3QFY19, the company posted a net profit of RM151.5mil versus a net loss of RM513.4mil in the same period a year ago due to gains from asset disposal, absence of impairments totalling RM563.5mil and tax exemptions for Armada Sterling FPSO and Armada Sterling II FPSO.

Analysts noted that the Armada Kraken FPSO reached an uptime of more than 90% during that quarter, providing comfort on its operational certainty moving forward.

Orderbook, meanwhile, remains healthy at RM18.5bil with another RM10bil worth of potential extension.

This would sustain the group’s revenue for the next few years.

Currently RM2.8bil of the RM9.9bil total debt as at end-Sept are still classified as short term.

However, the RM1.5bil related to Armada Kraken FPSO is expected to be reclassified as long-term debt in the near future.

Analysts have a target price of between 20 sen and 75 sen for the stock, which is majority-controlled by tycoon Ananda Krishnan.