PETALING JAYA: Digital security firm Securemetric Bhd expects to derive 50% of its revenue from recurring income, from the current 15%, over the next few years.

This, according to Securemetric CEO Edward Law Seeh Key, is in line with the group’s expansion plans, which include providing security-as-a-service solutions.

Law told StarBiz that the group has been beefing up its human resources through heavy investments last year, and will focus on growing its recurring income business this year.

Centagate Cloud will be rolled out to Malaysia, Indonesia, Vietnam and the Philippines.

It is also interesting to note that Securemetric is the first South-East Asian cybersecurity firm to have its Centagate product fast ID online (FIDO)-certified. 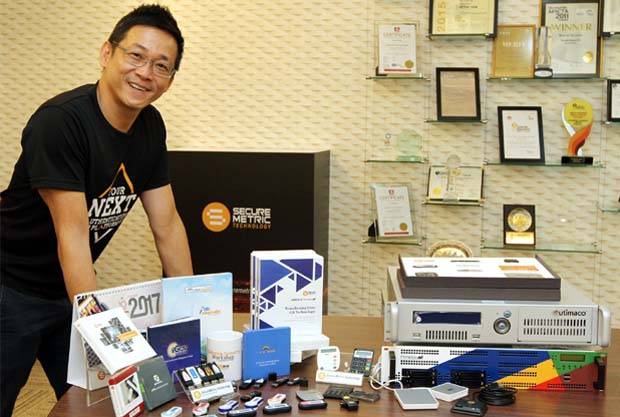 Edward Lau with some of the company's products

“Our next product would be a digital signing cloud service, among other products to be rolled out.

“Following our collaborations formalised with Indonesia’s PrivyID, Joget Inc and Innov8tif Solutions Sdn Bhd, we foresee more cross selling opportunities ahead as we leverage on each other’s strengths, ” said Law.

The group’s major customers include VAXUCO (the procurement arm of Vietnam’s Ministry of Defence), Bank of the Philippine Islands, Scope International and Lazada.

However, on a nine-month basis, the group registered a net profit of RM1.81mil.

The bulk of Securemetric’s revenue in FY19 was derived from its Singapore market, which contributed RM7.29mil of the total RM21.42mil for the nine months of FY19.

The company has made some inroads into markets like Vietnam and the Philippines but at the last count, Malaysia only contributed RM2.33mil to total group revenue over the same period.

Law explained that the group’s largest market varies across the years of operations, depending on projects secured and developments in the local scene.

Indonesia was the largest revenue contributor in FY18.

However, Law expected the awareness and demand for cybersecurity solutions to pick up in Malaysia.

In fact, Securemetric has recently secured several letters of award from local financial institutions, in relation to RMiT.

Apart from that, Securemetric looks to participate in Malaysia’s setting up of the National Digital Identity, with the group’s forte in digital signature and digital authentication, as well as drawing experience from its partnership with PrivyID, Indonesia’s first Non-Government Institution Certified Certificate Authority.

PrivyID is the first private company in Indonesia that was granted access to the National Identification database.