THE decision on the takeover of the largest highway concessionaire in Malaysia, PLUS Malaysia Bhd, is scheduled to be out next week.

Most are aware of the four proposals by private entities for PLUS. There is, however, a fifth proposal that has yet to be heard by the market.

This is a proposal from Khazanah Nasional Bhd.

Currently, PLUS is controlled by the UEM Group – a subsidiary of Khazanah Nasional – and the Employees Provident Fund (EPF). Khazanah holds 51% stake in PLUS with the remainder 49% held by the EPF.

Khazanah has proposed that the best entity to take over PLUS is in fact the government.

While it is fine that all four players vying for PLUS have offered cash for the equity stakes of both Khazanah and the EPF, the more pressing issues are PLUS’ debts, says a source.

PLUS has total debts of about RM30.2bil, of which some RM11bil is government guaranteed.

PLUS’ yearly principal repayment was some RM300mil. This increases to RM500mil in 2020 and becomes heavy from 2024 onwards, when it doubles to RM1bil. “Should the government be the owner of PLUS, the issue of compensation, government guarantees and even concession periods no longer matter, ” said the source.

Earnings wise, PLUS does not seem to be doing so well.

Based on information by the Companies Commission of Malaysia, PLUS recorded a loss of RM93.53mil for its financial year (FY) ended Dec 31,2018. It also recorded losses in FY17, with revenue of RM3.99bil and a net loss of RM101.46mil.

Nonetheless a net loss does not necessarily imply that the company is having financial difficulties. PLUS’ cashflow is still strong and more than enough to service its debts.

Its free cashflow was RM1.64bil in the first nine months of 2018, according to a report by rating agency Malaysian Rating Corp Bhd (MARC), which also allowed it to declare dividends to its shareholders.

The government currently owes PLUS RM2.7bil in compensation. PLUS’ concessions end in 2038.

The government is unofficially the rightful owner of PLUS.

In March 2019, MARC had affirmed its AAAIS rating on PLUS’ RM23.35bil sukuk musharakah programme, where the rating outlook was also revised to stable from negative.

MARC has said that PLUS’ sukuk programme rating of AAAIS hinges on continued government support and its maintenance of policies that are beneficial to the country’s toll road industry.

MARC had said that the revision to stable factored in PLUS’ healthy liquidity profile and cash balance on the back of stable traffic performance of its portfolio of matured highways that allows the toll concessionaire some leeway to withstand shifts in the prevailing regulatory environment for the domestic toll sector in the intermediate term.

More importantly, MARC said that it considers the government’s golden share and indirect major shareholding in PLUS as well as the critical role of the North South Expressway (NSE) in the country’s transportation system as factors underpinning the rating uplift.

For some background, the government has a golden share in PLUS through the Minister of Finance Inc (MoF), which allows it to appoint a chairman and two directors in PLUS.

In addition, the government has veto power to voluntarily wind up or dissolve PLUS as well as undertake disposals and acquisitions for which approvals are required from the shareholders, Bursa Malaysia or any other exchanges on which the company’s shares may be listed.

In a 2017 note, MARC had mentioned that under the terms of the sukuk programme, the cessation of the government to be the single largest shareholder of PLUS, either directly or indirectly via the MoF, EPF or Khazanah collectively, would constitute an event of default.

“Therefore, MARC derives considerable comfort in the implied commitment of the government to remain the single largest shareholder of PLUS, ” said MARC in the 2017 note.

In its 2018 review, MARC said government support towards PLUS is strong, as demonstrated by the time-subordination and cross-default provisions of the government-guaranteed sukuk (GG sukuk), financial assistance on funding costs for the Series 2 sukuk, tax breaks and the government’s subscription of one golden share in PLUS.

As of last week, the Cabinet has ordered the three main ministries back to the drawing board before it decides on the takeover of PLUS, says a Works Ministry source.

The market is now aware of the few conditions needed for the PLUS deal to materialise. The government must not be burdened with further debt, the toll rates have to be reduced by at least 18% and the concession period cannot be extended more than 20 years, says the source.

So far, the four offers made for PLUS include the following: 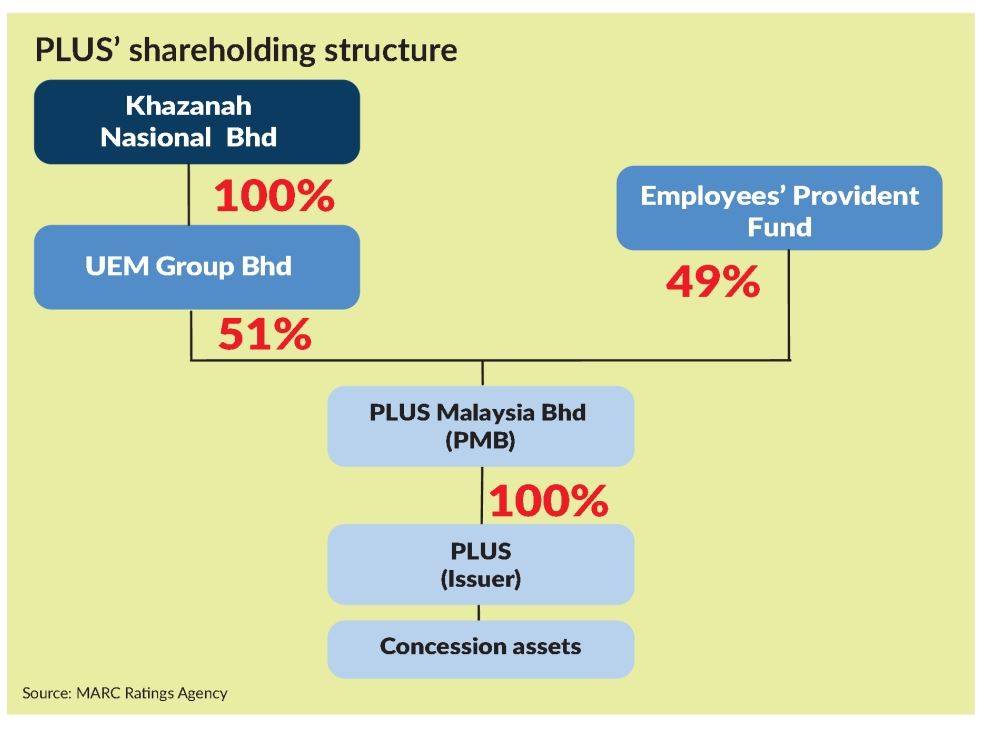 Firstly, Tan Sri Halim Saad and Datuk Wong Gian Kui have made a RM5.2bil offer to buy the entire equity interest of PLUS via Karongsa Private Capital Sdn Bhd.

Secondly, Widad Business Group Sdn Bhd, which owns Widad Group Bhd, has offered RM5.3bil cash to buy up PLUS. The total enterprise value Widad is offering for the deal is RM38.34bil.

The third offer is from a Malaysian-led, Hong Kong-based private equity firm, RRJ Capital, which has made a bid to acquire PLUS outright for RM3.5bil

Meanwhile, Tan Sri Abu Sahid Mohamed of Maju Holdings Sdn Bhd has put in a bid at an enterprise value offer for PLUS at RM34.9bil. Maju is the concession holder of the Maju Expressway (MEX).

This is Abu Sahid’s second attempt at controlling PLUS. He first made his intentions known back in 2017.

Back then, he said that PLUS paid three times more than it should have for maintaining the roads and that its puny margins are due to many related-party transactions.

These puny margins are another reason why some quarters think the government is the right party to take over PLUS.

Wastage from the maintenance contracts

One area which the government can immediately rectify will be the maintenance contract of the highways, of which the operations currently are largely carried out by Propel Bhd, says the source.

There is a view that PLUS could be paying less for its highway maintenance. Sources say that under the concession agreement some of the highway’s maintenance works are only to be done by Propel. However, UEM EDGENTA BHD

, which owns Propel, has denied such an agreement exists.

It should be noted that UEM Edgenta gets a substantial part of its earnings from Propel.

If the government were to take over PLUS, then it could definitely relook the agreement between PLUS and Propel, which would not only result in cost savings, but also allow PLUS to keep its profits.

The cost savings from this could perhaps be used to buffer any future revenue shortfall.

The private bidders for PLUS believe that they can maintain the highways at a much lower cost.

In a previous interview with StarBizWeek, UEM Edgenta managing director and chief executive officer Datuk Azmir Merican said that while they certainly provide maintenance for all highways under PLUS, spanning 1,100 km, this doesn’t mean that they control the entire maintenance costs spent by PLUS.

The remainder 50% of works is tendered out to other parties

To recap, UEM Group and the EPF took over the assets and liabilities of PLUS Expressways in 2011 in a RM23bil deal. This resulted in the EPF’s stake increasing to 49% from 12.03%, while UEM Group’s holding fell to 51% from 55%.

PLUS is the toll concessionaire of five major highways in Malaysia, of which the 772-km North-South Expressway (NSE) is its key highway in terms of revenue generation.

The coming week will determine if the backbone of the country’s road infrastructure will go into private hands or remain with the government.

When the government took over the highways in 2002, the mantra then was to do away with the practice of “privatising profits and socialising losses” related to the country’s infrastructure. Now 18 years later, we will soon find out if this mantra will still hold or the old practice that benefits certain private parties, will come back.