Challenging year for funds: The EPF declared 6.15% dividend last year. This year it says its performance may be affected by market conditions.

THE news this week that Permodalan Nasional Bhd (PNB) declared its lowest ever return sent reverberations among many households in Malaysia.

After all, PNB is the largest fund management house in the country and there are more than 14 million Malaysians who own Amanah Saham units.

Its flagship fund, Amanah Saham Bumiputera (ASB) unitholders have been enjoying returns of 7% to 8% over the past 29 years.

This week PNB declared a dividend of 5.5% including bonus.

PNB attributed the weak performance on the local stock market, which is down more than 7% this year and currently trading at its lowest in three years.

To be sure, it is not only PNB which is suffering. The country’s largest fund, the Employees Provident Fund (EPF), just last week warned that 2019 has been a difficult year for the fund and the uncertainty in the market would affect the performance of the fund.

The EPF is expected to declare its annual dividend early next year when it announces its full-year results.

For its third quarter of 2019, EPF saw a 7.6% drop in total investment income compared to a year earlier. It said this was due to the uncertain and volatile capital market that has worsened since 2018.

What is also clear is that the entire privately run unit trust industry is also in the doldrums, returns-wise.

According to data from Lipper Fund Performance tables, funds focused on buying Malaysian stocks made an average return of about 2.24% over the last 12 months.

The performance of all these funds, which have exposure to the local stock market, is only to be expected. 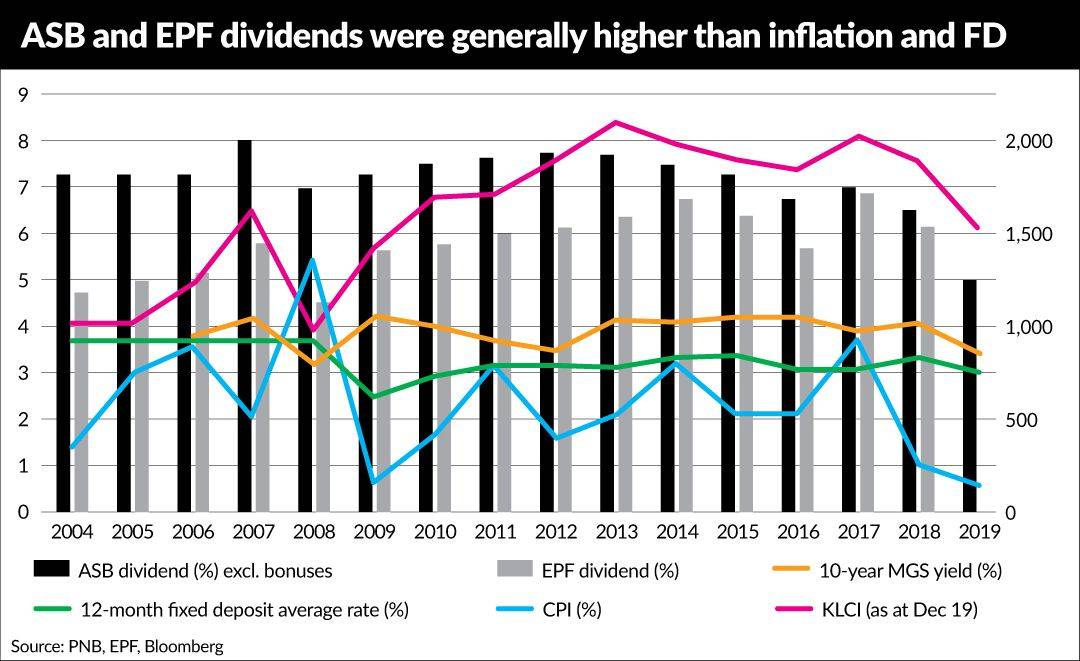 The FBM KLCI, which gauges the performance of the top 30 companies on Bursa Malaysia based on market capitalisation, has been the worst-performing index in the region.

The index has declined by more than 7% this year after it fell almost 8% a year earlier. While the US-China trade war is one of the main reasons often cited for the weak market, it is worth noting that Malaysian corporate results have also suffered.

Many equity analysts covering the Malaysian market have been continuously lowering their corporate earnings growth forecasts since the beginning of the year. For example, MIDF Research is targeting a mere 1% growth in corporate earnings for 2019.

Meanwhile, the MSCI Emerging Markets index, which tracks big stocks in markets like China, Taiwan, Indonesia and India, rose by 8.5% over the first 11 months of 2019.

Also, major equity indices in the United States, United Kingdom, Europe, Japan and Asia made returns of between 9% and 23.4% over the same period.

This has led to the few local funds that invested in overseas equities to perform better.

The Lipper Fund tables showed that on average, funds focused on Asia-Pacific equities made 8.23% return for the last 12 months.

Meanwhile, funds that invested in global stocks made an average return of between 10% and 11.7%.

Malaysia has one of the largest unit trust industries in the region. At last count, there were 39 licensed fund management companies, managing a total of 683 funds with a total asset value of a RM482bil.

Investors from Malaysia have more than 20 million accounts with these funds. These funds make up around 30% of the entire RM1.03 trillion market capitalisation of the local bourse.

Most of these funds, especially those that focused on local equities, have performed poorly this year with some having showed negative returns.

Compounding matters for holders of local unit trusts is the fact that these funds do not guarantee their capital. It is worth noting that both the EPF and some of PNB’s funds guarantee the capital of their investors and in EPF’s case, there is an additional guarantee of a minimum dividend rate of 2.5% per year.

Notably, for the last 20 years, the EPF and PNB annual dividends have been generally higher than the inflation rate and banks’ fixed deposits.

Back to unit trusts, it should be noted that fees imposed are not cheap. Aside from fund management fees, it is well-known that unit trust sales personnel pocket commissions ranging from 1.5% to 2.75%.

As for PNB, it is worth noting that the fund is susceptible to the local equity market performance because 65% or RM202.7bil of its funds are invested in equities and the bulk of that in locally listed stocks.

In comparison, EPF, which is currently managing more than RM800bil, has a more diversified portfolio, with 38% in equities, 51% in fixed income, 6% in money market and 5% in real estate and infrastructure investments.

Acknowledging the weakness in the local equity market, PNB has shifted some of its investments to the overseas market and plans to do more of it.

“If we had invested entirely in the domestic equity, we would have been experiencing losses, according to our local benchmark index. We could be having negative returns, ” said PNB chairman Tan Sri Zeti Aziz during ASB’s announcement on Wednesday.

For the coming years, PNB is targeting to raise its overseas exposure from 8% to 30%.

However, will this strategy work?

“The US market is trading at an all-time high. Also, if you are talking about private equity, the gestation for returns is usually about five-years, ” points out a fund manager.

Meanwhile, for PNB to increase its allocation into overseas assets, the fund may need to divest some of its positions in the local stocks. That said, PNB has cash and money market holdings to the tune of RM43.5bil, which it could deploy in overseas investments.

, Chemical Co Malaysia, and Duopharma Biotech, among others.

“There is some fear in the market that PNB may sell at a time when the market needs support from government-linked investment companies (GLICs) to support the local stock market, ” says an analyst.

Are lower returns the new norm?

For decades, unitholders of ASB have come to expect high returns from PNB that was once feted as the ideal product for investors afraid of market conditions.

ASB funds were promoted by many local banks offering loans to invest in these funds. The promise of a set level of returns above interest rates was the selling point.

However, the recently announced lower returns jeopardises that situation.

“Bear in mind that most ASB loans provided by banks come in at slightly above 5%, as such some investors may need to top up their own cash to cover the bank interest, ” says a fund manager.

In the past though, PNB had managed to pay higher dividends. In 2008 for example, despite the market dropping by some 40%, PNB managed to declare a dividend of 7%. The fund had explained that it had reserves to tap into then.

Nonetheless, that model has to change as the market has been down in the past five out of six years. Hence it will be a challenge for the fund to maintain high dividend payouts.

Nonetheless, the decline in dividend is not only unique for PNB.

Last week, the EPF had informed that its performance could be affected by the market conditions. The fund had posted lower income for the third-quarter this year, which indicates a lower dividend for the year is a high likelihood.

Recall that in 2008, the FBM KLCI fell by almost 40%. That year marked the biggest decline in EPF’s dividend from 5.8% in 2007 to 4.5% in 2008. Meanwhile, another government-linked fund, Lembaga Tabung Angkatan Tentera (LTAT), in September, declared its lowest-ever dividend of 2% for 2018, compared with a minimum of 6% paid over the past four-and-a-half decades.

The fund, which had gone through a major shake-up following the change in government, had said that the previous dividend payouts were not sustainable for the fund.

Lower returns for managed funds is nothing new. As they say there are always risks in any form of investment. A recent example would be global financial crisis that was sparked by collapse of Lehman Brothers in 2008. Mutual funds did badly and many investors in the US lost a lot of money.

Equity investors in Malaysia, whether through direct investments or via funds that invest in Malaysia, are in for a rough period.

Similarly, lower returns are to be expected from from like PNB.

In one LinkedIn reply, an individual questioned why PNB was explaining its low returns by benchmarking it against fixed deposit rates and the FBM KLCI index. He said that PNB ought to benchmark itself against fund managers who beat the index and that the volatility and unpredictability in the markets are not grounds enough for PNB to show lower returns. He also claimed that PNB fund managers were too cautious and risk averse. In response, Jalil said this: “That would mean taking on additional risks and that would mean you need to be prepared for higher losses. ASB is a fixed price fund that’s meant to give stable rates of return. There is no such thing as higher risks, capital protected and higher returns sitting together, ” he quipped in his reply.

Hence, it is likely that lower returns are going to be the norm in the foreseeable future should the markets remain challenging.