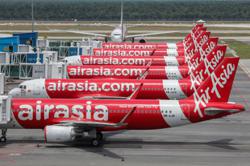 boss Tan Sri Tony Fernandes said he will lead airasia.com until a new CEO is hired, as he announced the reorganisation of the group's leadership with the goal to turn the budget airline into a travel and financial platform company.

"We are taking travel to another level by giving our guests a truly integrated and end-to-end experience," he said in a statement today.

"Right at the heart of this is airasia.com, which will be a lifestyle brand that offers a frictionless travel experience of discovery, booking, pricing, branding, deals for all our products and partnerships," he added.

Joining him on board the new venture are AirAsia Bhd chief commercial officer Karen Chan, who will drive all commercial functions as airasia.com.

She will assisted by Spencer Lee, who will take up the role of airasia.com chief operating officer managing the online business portfolio that includes OURSHOP, AirAsia WiFi (ROKKI), hotel partnerships and others.

A chief product officer for airasia.com will also be appointed to head up the product teams, while AirAsia software engineering and technology (AASET) head Elias Vafiadis will continue to lead software engineering, all reporting to Fernandes in the interim.

Lingam will continue to run the core airline business and drive customer service improvements and cost efficiencies through digitalisation and the One AirAsia initiative.

Aireen Omar has been appointed as AirAsia Group president (RedBeat Ventures) and will head up the corporate venture capital arm.

In this role, she will focus on seeking out new companies and technologies to power AirAsia's core business while still overseeing the company's digital businesses such as BigPay, Teleport and AirAsia BIG Loyalty.

"To make this work, we have to have the right structure in place and with today's changes, I believe we have put in place the right foundations that will allow us to really drive our digital and ancillary business, which I see eventually contributing up to 70% to earnings," Fernandes said.

The tour kicked off at the Innovation Lab with AirAsia presenting airasia.com, its all-in-one travel platform, followed by a demonstration of a seamless, fully digital airport experience powered by AirAsia’s FACES (Fast Airport Clearance Experience System).

AirAsia also demonstrated how digital engineering solutions such as blockchain technology and Skywise, as well as key components of its future travel blueprint, including e-marketplace OURSHOP, cargo and logistics platform Teleport, fintech venture BigPay, and lifestyle and entertainment affiliates such as Santan and AirAsia Foundation.