No increase in cement price

Saifuddin: They stated several grounds to justify an increase in the cement price due to costlier imported materials used in making the cement because of the weak ringgit. However, following (Tuesday’s) meeting, they agreed to not increase the cement price,

PETALING JAYA: Following a meeting with the Domestic Trade and Consumer Affairs Ministry, industry players have agreed to not increase cement prices.

Minister Datuk Seri Saifuddin Nasution Ismail told reporters that the decision was reached following a meeting between the minister and key industry players on Tuesday.

“They stated several grounds to justify an increase in the cement price due to costlier imported materials used in making the cement because of the weak ringgit.

“However, following yesterday’s meeting, they agreed to not increase the cement price,” he said, according to a Bernama report.

During the meeting, he said, industry players were also reminded to discuss with the ministry if they intended to increase the price of cement. This, he said, was because cement price is controlled by the government, and action can be taken against those found to increase prices without government approval, under the Control Of Supplies Act.

Prior to the minister’s announcement yesterday, there had been widespread concerns about a steep hike of up to 50% in the price of cement. Over the past few days, several cement and ready mixed concrete players had reportedly issued price increase notices.

The concerns also came on the back of the recent takeover of Lafarge Malaysia Bhd by YTL Cement Bhd, which created a market leader with a capacity share of over 60% in Peninsular Malaysia.

The takeover had led to analysts noting the possibility of cement prices being raised due to the emergence of YTL as the new “price leader and price setter in the market”.

Earlier this week, the Cement and Concrete Association of Malaysia came out to say that the cement industry had been suffering over the past few years from an increase in the electricity tariff, an increase in packing materials and rising cost from imported fuel, materials, engineering spares and equipment.

While the industry had been absorbing these cost increases, it said, cement prices in Peninsular Malay­sia have been on a downtrend since 2016 and “have reached a level that is not sustainable”.

In reaction to this, the Malaysia Competition Commission also issued a statement to assure that it would be monitoring the industry.

Noting that the merger between YTL and Lafarge had led to the market being more concentrated at the upstream and downstream level, it said Section 4 and Section 10 of the Competition Act prohibited enterprises from entering into any anti-competitive agreement and abusing their dominant position in the market, respectively.

If the 50% price hike had been implemented, the price of cement would have risen to between RM270 to RM290 per tonne, compared to only about RM190 per tonne previously, according to AmInvestment Bank Research. 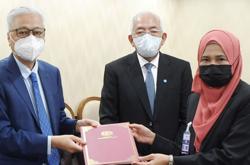