Sex clip merely a pawn in a bigger political game

THE video of two men, one said to be Datuk Seri Azmin Mohd Ali, in a compromising position is not the first and will not be the last to rock the Malaysian political scene. There could be a few more until the handover of the premiership from Prime Minister Tun Dr Mahathir Mohamad to his successor takes place.

Anxiety over the issue of political succession and parties seizing the opportunity to sow discord in Parti Keadilan Rakyat (PKR) appear to be the reasons for such videos surfacing.

For now, PKR leader Datuk Seri Anwar Ibrahim is the anointed successor to Dr Mahathir. However, because there is no firm date set for the handover, the politicking has picked up pace.

Azmin has denied that he is the person in the video, while the other party, supposedly Haziq Abdullah Abdul Aziz, has admitted to being in the clip without even being coerced.

Haziq is part of PKR. He is the private secretary to the Deputy Primary Industries Minister Datuk Seri Shamsul Iskandar Mohd Akin, who is in the top leadership of PKR.

Amidst police investigations on whether the clip is fake, one cannot run away from the fact that social media tools from Whatsapp to Twitter and videos are increasingly being used in political campaigns. They are cheap to produce and an effective messaging tool.

From the US to India and Hong Kong, social media is being used to shape opinions and garner political support.

It is not new. Five years ago, a division within the University of Cambridge produced work to outline how social network sites and messaging tools influence and predict the personalities of the millions of users better than human beings.

Prior to 2014, predicting the outcome of elections was left to a group of self-proclaimed political strategists. The group would lock themselves up in an “election war room” and map out strategies.

Now, a group of geeks run the campaign based on data that is mined from social media platforms such as Facebook, Twitter, Google and WhatsApp. The outcome is more effective and predictable.

The irony is that while the social media platforms are firmly part of any election campaign, there is no software to detect the fakes. There are no conclusive testing mechanisms other than expert findings that can be easily disputed.

The latest sex video case may take months or weeks before anything conclusive can come out of the investigations.

Until then, are we going to be distracted by the political developments? If Dr Mahathir decides to hand over the reins in 2021 and not next year as planned, will the country continue to be mired in gutter politics?

It cannot be the case. Politicking cannot hold centre stage, especially now, when the economy is slowing down.

The domestic economic momentum is slowing down amidst the global trade war between the US and China. Consumer and business sentiments, which are major indicators of the confidence level of the domestic economy, are waning.

The Malaysian Institute of Economic Research (MIER) Business Condition Index hit a high of 116.3 points in the second quarter last year on the back of a new government coming into power.

MIER’s Consumer Sentiment Index reached 132.9 points a year ago on expectations that the government’s spending plans would catch fire, dissipating inflation fears and expectations of wages growing faster than normal.

Since then, both the Business Condition Index and Consumer Sentiment Index have been trending down and are now below the 100-point level.

Malaysia’s current account surplus is growing largely on the exports of goods and services. It hit a high of 4.7% of gross national income (GNI) in the first quarter of this year. However, wage growth is down to 7% compared to 9.8% in the fourth quarter of last year.

Considering that the government is focused on ensuring public funds are better handled compared to the days of Barisan Nasional’s rule, it is only to be expected that public spending would be cut.

Towards this end, several projects were shelved and the cost reduced for many others. After a year, the government has stated that work has resumed for all projects affected by the cost cuts.

But that is not really the case. When one asks the private sector, the feedback is that the implementation of public projects is still slow and hence the waning business condition index.

The political climate at the moment is a distraction from the bigger and more important agenda of reforming and fortifying the economy. At the moment, there are no doubts that the Pakatan Harapan government is here to stay, as it holds a convincing majority in Parliament.

However, the latest development has created doubts if the coalition would remain united and strong as it sees through the transition in the Prime Ministership.

For perception to improve, the politicking must cease.

At the end of the day, it’s the economy that counts. The bread-and-butter issues matter most to the people. Wage growth and a vibrant economy would infuse a feel-good sentiment into consumers and not sex videos that nobody can say for sure is real or fake. 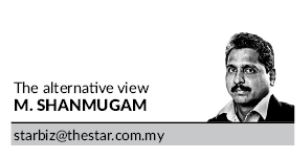