“It is a very competitive tendering environment now. For some tenders, we see more than 100 contractors bidding and it impacts all levels of contractors.

“Even big contractors are feeling the pinch and are tendering for jobs in lower-volume brackets just to tide over the challenging business environment,” Foo said in an email response to comments from building construction sources that contractors are willing to accept a small loss in order to secure job contracts.

filed a statement with Bursa Malaysia initiating arbitration proceedings against NRY Architects for RM305.4mil and other contract breaches for the construction of buildings of International Islamic University Malaysia in Kuantan.

An industry source said one construction company does not sour the entire sector, but three other sources said building contractors are feeling the strain of the weak property market.A source said he personally knows of one which closed down a few years ago when the property market began to weaken in 2014.

Another source said contractors would have to continue to play the game because of equipment purchased during the good times.

This second industry source said: “Previously, they could make more money and now they have to cut down their profits. They have their overheads and margins. They cannot retract too much because when the job comes back, there are not enough workers. We don’t know where the economy is going.”

“If a contractor prices too low, he may have problems delivering the project at the end of the day,” Foo said.

The weak property market has resulted in an oversupply of residential units which lack demand on two counts – they are located in places which lack demand because the surroundings lack facilities and infrastructure, or they are priced out of reach of the ordinary folk.

The weak demand has resulted in developers putting the launch of new units on hold, or delaying their launches, impacting the building construction industry.

The construction industry is generally divided between building construction and infrastructure. The infrastructure boys, according to industry sources, seem to be faring better.Foo said most contractors would have experienced delays and non-payment problems. He hopes contra arrangements, giving properties in exchange for payment, are not very high.“Contractors should be paid for work done – and not be paid in kind – to ease their cash flow,” he said.

He said that as long as there are contractual arrangements and freedom between parties, contractors will continue to face payment issues.

“These issues (late or delayed payment or contra arrangements) not only happen in the property development or the construction industry, but also in other industries.

“This is part of the ‘occupational hazard’ and risk of the industry if you are unlucky to have a ‘slow payment’ or ‘non-payment’ client,” he said.

Foo said MBAM has heard about such incidents “for quite some time”.

“Sometimes, due to the prevailing market situation, contractors may have no choice but to accept payment in the form of properties and hopefully be able to dispose of them later and recover some of their money/payments. Sometimes, it might be due to contractual disputes,” he said.He said this situation of delays or payment in kind has come about due to cash-flow problems and other contractual-related reasons. 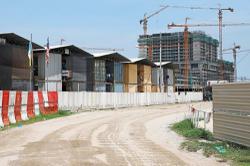 Companies to abide by govt rules on screening