PETALING JAYA: The Federal Land Development Authority (Felda) has made quite a number of bad investment decisions, according to the White Paper released by the Economic Affairs Ministry.

In addition, it has been revealed that the “put option” in Felda’s deal to acquire a 37% stake in Indonesian planter PT Eagle High Plantations Tbk (EHP) from PT Rajawali is not as straightforward as it seems.

According to the White Paper, based on forensic studies conducted by Ernst & Young, the asset value of Felda’s eight investments, which cost the group some RM4.4bil, has dropped by 50% to about RM2.2bil based on information in its audited accounts.

The paper said Felda’s accounting reports over the last few years have also been inaccurate.

“There was complete disregard of Felda’s investing processes, lack of due diligence and risk management by Felda’s board when making its investment decisions,’’ it noted.

What is obvious is that Felda significantly overpaid for its 37% stake or US$505mil in EHP from Rajawali.

Furthermore, another finding showed that when Felda’s board approved the acquisition of EHP shares via a special-purpose vehicle at the same price on Dec 7, 2017, EHP’s market price was even lower at US$0.0098/rupiah 135 per share. This means that Felda agreed to buy EHP shares 344.12% higher than its market price at that time. 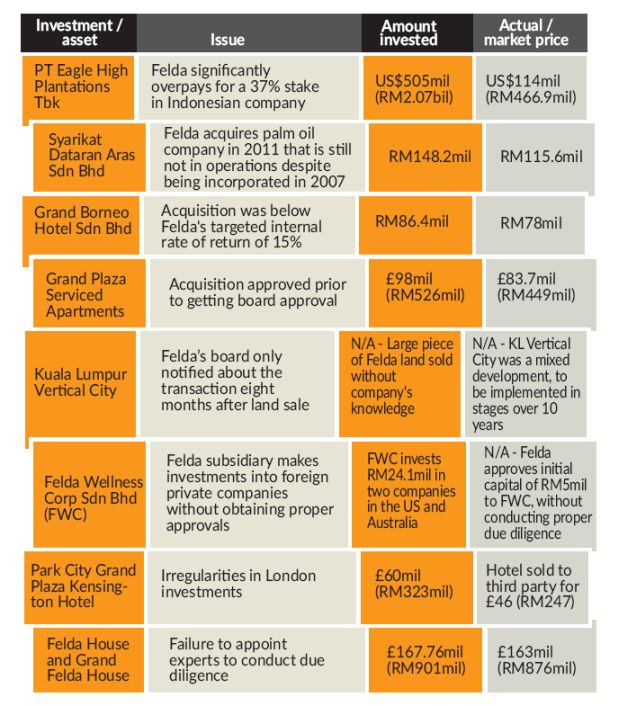 Another important finding is that the supposed “put option” in the EHP agreement that would negate unwarranted financial losses to Felda is not straightforward, and comes with conditions.

Former Prime Minister Datuk Seri Najib Razak had said that Felda’s interest was protected, as it had an option to sell back its shares in EHP at the original purchase price on top of a 6% interest charge imposed on the Indonesian firm.

However, the forensic studies revealed that Felda would only be able to recoup its investment amount and profit at a rate of 6% a year in Year 5 from the vendor (Company A1) via the “put option” (Company A1 is a private company in Indonesia).

The put option can only be triggered if any of these takes place:

> EHP goes against its obligation of abiding by the Roundtable on Sustainable Palm Oil (RSPO).

> EHP fails to get its RSPO certification within two years.

> Company A1 commits a material breach.

> Company A1 or the major shareholder of company A1 or EHP initiates or consents to judicial proceedings in relation to itself under any applicable liquidation, insolvency, composition, reorganization, etc.

There is also no evidence to show that a credit assessment was conducted by Felda on Company A1 in 2016, with regard to its ability to repay the full investment via the put option should that scenario take place.

Speaking in the Dewan Rakyat, Azmin yesterday revealed that Felda had been prevented from exercising the put option due to opposition from Rajawali.

“Early this year, Felda issued a notice to EHP to exercise the put option. What happened? They fought it and refused (to comply),” he said.

“They took Felda to court. After the court granted Felda’s application, Rajawali initiated an arbitration action against Felda,” he added.

The White Paper revealed that the board of directors in Felda had approved the investment in EHP despite knowing that the boards of FGV Holdings Bhd and Felda Investment Corp Sdn Bhd (FIC) did not support the acquisition due to its high valuations.

Furthermore, Bank Negara had issued many questions with regard to the investment structure, benefits of the acquisition and the usage of capital.

Despite knowing the risks involved, Felda’s board approved the investment without additional due diligence and without any explanation during its minute meetings.

For some background, Felda’s board of directors had approved the acquisition of exchangeable bonds for shares in EHP via FIC Properties Sdn Bhd (FPSB) for US$505.4mil in December 2015.

On Oct 16, 2016, Felda’s board approved the change of structure in the EHP investment to a 37% stock acquisition instead, but at the same value of US$505.4mil.

Felda would make this acquisition from a private company in Indonesia (Company A1) and this deal came with the put option.

The Finance Ministry (MoF) was also involved in this investment process, as it gave advice on the structuring of the investment.

The acquisition was paid via a loan amounting to RM2.3bil from Govco Holdings Bhd, which is a company under the MoF.

A corporate guarantee was given by Felda at a rate of cost of financing plus 15 basis points. This loan would need to be repaid in seven years.

There is also an impairment of value of RM1.58bil for Felda’s financial year ended Dec 31, 2017 via the entry “fair value through profit or loss”.

The investment in EHP also went against Felda’s investing principles.

This is because the acquisition of EHP shares, even with the put option, would have only given a return of 6% a year. Felda’s investing principles call for a minimum return that is higher than the average market return rate.