FOR the first time in five years, the 40 wealthiest Malaysians saw their wealth decline. The total wealth of the top-40 Malaysians based on their shareholdings in listed companies dropped by RM22.4bil to RM268.1bil as of end-2018.

The decline in the value of the 40 richest Malaysians – compiled based on their effective interest in listed companies in Malaysia and overseas – came amidst a drop in the FBM KLCI of 6% due to global uncertainties. The changes in business policies that came about after the new government came to power on May 9, 2018 exacerbated the drop in the total wealth of the rich.

In absolute amount, the person who saw the biggest drop in wealth is T. Ananda Krishnan, whose net wealth fell by RM7.64bil to RM12.77bil as at end-2018. His three compaies – Maxis Bhd

– all saw a drop in values due to changes in the business environment they operated. The worst hit is Bumi Armada, a service provider to the oil and gas industry, that is battling bankers on the weight of debts amounting close to RM9.5bil.

Tan Sri Lim Kok Thay came a close second in absolute loss of paper wealth as his net worth was shaved off by RM7.25bil to RM16.56bil. The share prices of both Genting Bhd

, which runs the casino and Genting Malaysia Bhd

Lim who oversees a global business empire nevertheless is the fifth richest man and sits at the helm of a group with a cash pile of RM8.8bil.

In terms of percentage, MyEG Services Bhd founders saw their wealth cut by 58.2% in 2018. MyEG was one of the worst-affected stocks post-May 9, 2018 elections as its core business was providing e-government services. The founders of MyEG – Datuk Wong Thean Soon and Datuk Norraesah Mohamad – were riding high in the previous regime as they were supposed to roll out the tax monitoring system under the Goods and Services Tax regime.

Wen took over at the helm of SelProp following the passing of his mother in September last year while Wong of Riverstone is one of four among the top 40 who made their pile from the glove industry. Yinson’s Lim made it to the list on the back of the company forging ahead of other players in the floating production storage and offloading business.

There are hardly any changes to the list of top 30 billionaires although their positions have moved up or down the list. For instance, Genting group’s Tan Sri Lim Kok Thay has moved down three notches to fifth spot while Ananda is down to eighth.

By far, Robert Kuok of the Kuok group continues to be the richest man in Malaysia with a net worth of RM43.59bil. His business empire stretches from China to Australia and the tycoon hardly spends time in Malaysia.

The year 2018 belonged to glove manufacturers where four in the top 40 came from that sector. The four are Hartalega

Top Glove’s Lim and Hartalega’s Kuan are among those who saw the biggest jump in their net worth due to the rise of prices of glove manufacturers.

The biggest gainer is Tan Sri Chen Lip Keong who controls 65.8% of Hong Kong-listed Nagacorp Ltd. The Nagacorp group is the largest hotel, gaming and leisure operator in Cambodia. Chen’s net worth increased by 41% to RM13.1bil as at end 2018.

The list is compiled by an independent analyst based on the listed and disclosed shareholdings of individuals.

It is based on the closing share price on Dec 31, 2018. It does not take into account the borrowings or funding costs of the individuals.

The net worth is based on the person’s effective interest in the group. It does not take into account the stakes held at subsidiary or associate levels, which strips out double-counting. 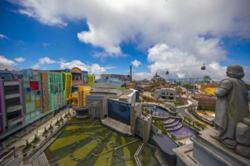