Resilient values: Geh believes that both landed and high-rise units in prime locations will hold their values.

THE Penang property market is expected to remain flat yet resilient this year and could bottom out within the next two years.

CBRE|WTW Research in its Real Estate Market Outlook 2019 says it will be a buyers’ market over the short term, particularly for residential properties.

“Under the prevailing subdued market, launches of smaller, single phase developments would reduce in the short-term but larger integrated mixed developments or townships would carry on.

“The property market is anticipated to remain generally soft and flat in 2019. This is in consideration of the challenging global and domestic economy, rising cost of living, as well as supply-demand imbalances, particularly in the high-rise residential sector.”

The property consultancy however adds that Penang’s property market still demonstrates resilience, aided further by recovery in the economy.

“Meanwhile, the current excess in supply will effectively be absorbed by the market. Benefits of reforms undertaken by the new government could also trickle down to the local property market.”

“As residential market activity, in terms of transacted units, has been falling over the last few consecutive quarters, at best the year-on-year levels will hold. In light of the overall soft market, property values are not expected to rise in 2019,” he tells StarBizweek. 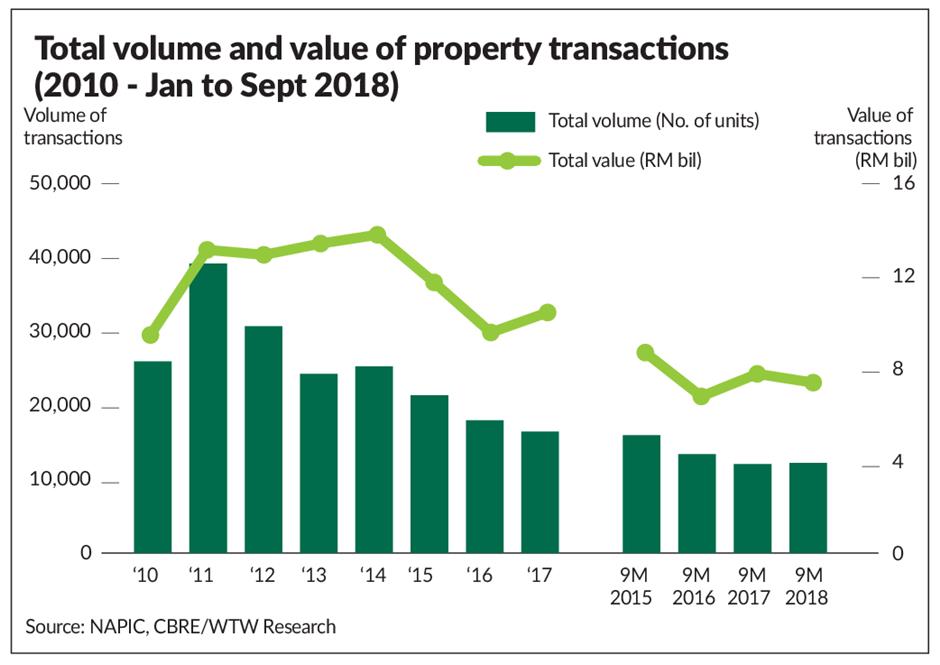 “However, long-term planning on infrastructure improvements will go some way towards ensuring those locations currently only accessible by cars are better served with public transport.

“For those who have been holding back their launches the past few years, there may be a need to start selling, especially if land were bought on loans.”

He adds that measures taken by the state government will help to spur the Penang property market.

“With the waiver of the 3% approval fee for foreign purchasers starting from Feb 1, Penang must be seen to be investor friendly and foreign buyers should be encouraged to come.”

Meanwhile, Knight Frank Malaysia in its latest research report Real Estate Highlights for the Second Half of 2018 says the general outlook for the Penang property market “remains mixed without a dominant overall trend”.

“However, resulting from the interplay of supply and demand as well as the general economy, different sectors are performing differently. The residential sector, which is the leading sector in terms of total volume and value of transactions, has shown some improvement during the first half of 2018.

“It registered a 5.4% increase in the volume of transactions year–on-year. This trend is expected to continue.”

Saw says prices of landed property in Penang are unlikely to drop.

“However, the high-rise market will remain challenging and developers will need to continue to offer incentives as well as alternate options of home ownership.

“Developers with deeper pockets or less loans may look into rent-to-buy schemes in tandem with the recently-announced National Home Ownership Campaign by the government.”

Geh believes that both landed and high-rise units in prime locations will hold their values, while speculatively-purchased condominiums will be affected.

“Government announcements on transportation plans, infrastructure and stimulus plans are among actions that can help stimulate the Penang property market tremendously,” he says.

CBRE|WTW Research says the overhang within the Penang residential property market is likely to ease over the next two to three years, with developers offering special packages and postponing launches, all of which would allow demand to catch up with supply.

“The medium to long-term outlook remains positive given that various policies and efforts are being undertaken by the government,” it says.

Citing data by the National Property Information Centre, CBRE|WTW Research says there are over 2,200 high-rise overhang units worth nearly RM1.6bil as at the second quarter of 2018.

“This is due to the abundant apartment and condominium units launched, constructed and completed within the past three-to-five years, coupled with the high rejection rate of end financing, unreleased bumiputra units and low demand for units in secondary locations.”

In terms of unsold residential units, CBRE|WTW Research says around 34% or 1,300 of the overhang units are in the RM500,001 to RM1mil per unit price range.

“On the other hand, units priced at RM1mil and above form the bulk (58%) of the total overhang valued at approximately RM1.75bil.”

“Under the challenging market, developers have resorted to offering incentives such as rebates on selling prices, zero or low downpayment, easy instalment payment of up to 24 months, deferred payment of (say) 30% of the selling price over five years at 0% interest, free legal fees and one year’s maintenance fee.

Knight Frank Malaysia says the office sector is still enjoying stable rents and high occupancies, pointing out however that the overall occupancy rates in some buildings have dropped marginally.

“This favourable state of affairs is expected to continue for the next few quarters as new supply is only expected to come on-stream beyond 2020.”

“New supply of offices in Penang in the past ten years was limited. New prime purpose-built office buildings completed within the past three years such as HunzaTower and Straits Quay Commercial Suites are enjoying commendable occupancy rates, although charging new benchmark rentals.

“Newly set-up offices, as well as offices relocated from older office buildings, comprise the tenants in these new buildings. Office occupiers are seeking newer office buildings that serve their contemporary needs and enhance their corporate image.”

It adds that pent-up demand for newer and prime offices would continue in the short-term, as most of the upcoming purpose-built office buildings are scheduled for completion in year 2020 and beyond.

“Older buildings are likely to experience a slide in demand thus lower rentals and capital prices.”

“As at mid-2018, the overall occupancy rate of purpose-built office buildings in Penang declined slightly to 77% from 82% year-on-year. Occupancy rates are anticipated to generally remain in the region of 80% in near future.

Due to increasing maintenance cost, CBRE|WTW Research says rentals of office space in most buildings are expected to increase in the short term.

As for the retail sub-sector in Penang, Knight Frank Malaysia says the current supply remains unchanged, adding that a more challenging scenario is anticipated for this sector with new supply to come on-stream with the expected opening of IKEA in Batu Kawan in the current quarter and the extension of Penang Times Square.

CBRE|WTW Research says the retail sector in Penang is likely to be flat, buffered by cautious optimism.

“Mixed performances will be more evident between the better and under-performing retail complexes, of which the latter is likely to drag down the overall occupancy and average rental rates.

“With abundant supply in the pipeline, shoppers can look forward to exciting shopping experiences.”

“Retail lots on the ground floor of selected prime retail complexes on the island commanded higher gross rental rates of up to RM45 per sq ft.”

“These malls have sustained rental rates but vacancy factors have certainly increased by 5% to 10%.

“There is no oversupply but a rise in vacancy factors. Going forward, the general population’s purchasing trend remains cautious and wary of big-ticket items.”

Saw is less optimistic about the Penang retail sector, saying “this sector has been saturated for a few years and there is no end in sight”.