The management said the termination of the JV agreement will only affect distribution of completely built up (CBU) models, as NVL is only involved in importing and distributing Nissan CBU models and parts.

While there was no explanation given by both parties, RHB Research does not rule out the possibility of a shift in strategy to focus more on local assembly operations.

The CBU segment has been facing regulatory issues in non-tariff barriers which has caused a supply bottleneck.

As such, focusing more on local assembly will help to ramp up production of its under-utilised plant in Danang, Vietnam.

The management said it is in talks with Nissan to arrive at alternative solutions as the termination only takes effect on Sept 10, 2019.

There should be no significant financial impact on the group in the near term.

“Year to date, we estimate that CBU models contributed about RM1.8mil, or an estimated 50% of the Vietnam operation’s earnings before interest, tax, depreciation and amortisation (EBITDA) and about 1% of the group’s total EBITDA.

“Over the longer term, however, this will cap Tan Chong’s earnings growth potential as Vietnam is its largest market after Malaysia.

“On potential impairments, the value at risk will be the total charter capital invested by Tan Chong in NVL of US$7.4mil (RM22mil), when it bought the 76% stake in NVL back in November 2010 from Kjaer Group.

“There will be no impact on its completely knocked down (CKD) unit, which operates under a separate agreement,” said RHB Research.

Key risks include unfavourable forex trend from a weaker ringgit, a further delay in new model launches and a longer-than-expected gestational period for its Indochina division. 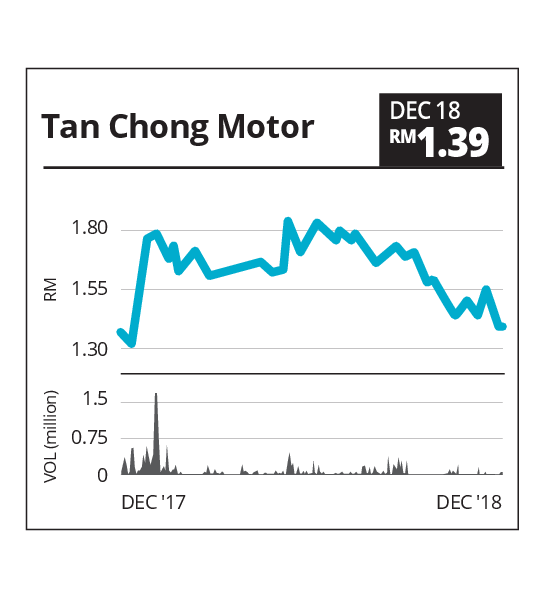 KOSSAN believes the key to maintaining cost competitiveness is through automation as it foresees higher labour and energy costs in the coming quarters.

Similar to its peers, Kossan has successfully automated the stripping and stacking processes, but is working on the packaging process. Its management plans to integrate the automation process into its production lines by 2019.

However, based on Affin Hwang Capital’s observations, Kossan still needs to work on perfecting the stacking process before it can integrate the packaging process.

“We believe the gains from the automation of Kossan’s production lines are likely to be dwarfed by the potential gains from the proposed integrated plant in Bidor, Perak.

“We believe that the plant would be similar to Hartalega

Kossan will also try to recruit its suppliers to set up production facilities within its vicinity, to further enhance cost savings.

Based on the research house’s estimates, EBITDA margin can improve by five to eight percentage points on completion of the plant.

However, Affin Hwang Capital believes it will be challenging to match the margin of its leading competitor, due to the different sales strategies employed by the two companies.

Kossan prefers to diversify its concentration risk, limiting its single customer risk to less than 5% of its overall sales. The research house believes this largely stemmed from the lower-than-expected average crude palm oil (CPO) price of RM2,242 per tonne compared to Kenanga Research’s FY19 assumption of RM2,350 per tonne and weaker-than-expected fresh fruit bunch (FFB) production of 150,000 tonnes (-18% year-on-year), which only accounted for 37% of the full-year projection of 409,000 tonnes.

The management indicated that production was dragged by old trees in Sabah, where 40% of palms are over 18 years of age.

A dividend of 2 sen was announced, below Kenanga Research’s full-year expectation of 13 sen.

“Accordingly, we have revised our FY19 to FY20 dividend from 13 sen to 19 sen and 4 sen in tandem with our earnings cut,” said Kenanga Research.

UMB has recently completed the acquisition of a 60% interest in PT Wana Rindang Lestari, which holds the licence to 59,900 ha of green field production forest in Sulawesi.

The land, which is slated to begin planting from 2019 onward, is intended for stevia, coconut, cocoa and coffee plantations.

While this presents new areas of growth and diversification benefits for the group, the gestation period for some of the abovementioned crops could be lengthy.

Kenanga Research maintains “underperform” for UMB with a lower target price of RM4.80 based on an unchanged forward price-to-book value (PBV) of 0.61 times applied to reduced 2019 book value per share of RM7.88.

The forward PBV is based on -3.0 standard deviation from the historical mean, given that the company has disappointed five quarters in a row, and medium-term earnings are likely to be impeded by high maintenance costs for young trees in Indonesia. PNB owns 65% of the joint venture while EPF owns the remaining 35% stake.

The proposed sale is expected to be completed by the first quarter of 2019.

In addition to the acquisition price, an adjustment mechanism has been agreed to determine an asset income performance-based consideration adjustment at the end of the fifth year following the deal completion.

Battersea will provide the JVCo with a five-year rental guarantee equivalent to a 5% yield on the purchasing price (£79mil per annum).

To date, the commercial space is 100% leased out to Apple and International Workplace Group.

CGS-CIMB Research believes this is positive as both developers will be able to monetise the asset and focus on the remaining development of BPS.

The acquisition price tag of £1.58bil is fair, in the research house’s view, and similar to the initial estimated gross development value (GDV) for the phase two commercial assets by the developer.

The financial implications of the disposal are expected to be neutral until the asset delivery and leasing have been substantially completed.

Work on the BPS building itself is progressing well and is scheduled to complete in 2020. The development will also benefit from the opening of the Northern Line underground extension in 2020.

The purchase price is subject to further due diligence and on the basis that the development is completed and fully tenanted.

“We expect the deal to be earnings neutral to SDP and SP Setia as the deal is done at the Battersea project holding level and the proceeds will likely be utilised for the remaining project phases in Battersea,” said CGS-CIMB Research.