The decision came about after the Attorney General, Tommy Thomas, decided not to pursue the case after finding little grounds for the charges.

Following Thomas's decision, the Kuala Lumpur Sessions Court discharged and acquitted both of them on Oct 17 this year.

To recap, the Securities Commission had on May 22, 2017, charged Vincent with insider trading of Maxbiz shares.

Vincent was charged with two counts of “communicating material non-public information” to Andrew regarding the company's classification as a Practice Note 17 (PN17) company under Bursa Malaysia regulations.

The transactions were alleged to have been a direct result of the insider information communicated by Vincent to Andrew.

In dropping the charges against the accused parties, Thomas said there were two reasons for his decision:

1. There was publicly available information at the time of each disposal which could rationally justify each disposal made by the second accused.

2. There is insufficient evidence in any event that the first accused (Vincent) communicated any insider information to the second accused (Andrew). The evidence is speculative and circumstantial – it would not suffice to justify a conviction on a criminal burden.

At the time of the disposals, the classification of Maxbiz as a PN17 company had already been made public.

Thomas added that while there was communication between the accused parties prior to each transaction, it was not out of the ordinary.

"The accused parties apparently communicated constantly between July 8, 2010 and Feb 10, 2011 - their communication immediately prior to each disposal was therefore not out of character in their relationship," he said.

"Certainly, it would be nigh impossible to convict on a 'beyond reasonable doubt' standard of proof."

Maxbiz's financials had been deemed financially inadequate by the stock exchange and put under PN17 status on Nov 3, 2010.

The PN17 classification, which recognises the company as financially distressed, would have a negative impact on Maxbiz's share price.

As a result of the classification, the company would have to submit a proposal for restructuring in order to maintain its listing status under Bursa Malaysia regulations.

In keeping with the stock exchange's requirements, Maxbiz announced the classification to the public the following day, Nov 4, 2010.

Maxbiz was delisted from the stock exchange on March 26, 2012, following its failure to submit a regularisation plan to the regulators for approval within a specified timeframe. 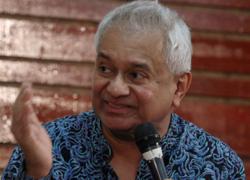