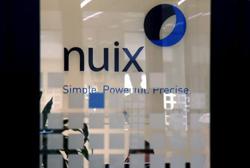 Challenging times: Bazlan’s (right) shocking departure as TM acting group CEO on Friday leaves Imri taking over as acting group CEO at a time when the telco’s services are coming under pressure from MCMC.

’s (TM) share price continued to slide after the abrupt departure of its acting group CEO, Datuk Bazlan Osman, on Friday and the company coming under pressure from the regulator for the shortcomings in its services.

In yesterday’s trading, its share price fell more than 5% to close at RM2.26. Year-to-date, TM has dropped 63%, wiping out RM14bil from its market capitalisation.

This may affect its standing as an FBM KLCI component stock when the next review comes up and have a bearing on the net asset worth of its shareholders, particularly, its major investor Khazanah Nasional Bhd.

TM’s 52-week low share price is RM2.11, while its high for the same period is RM6.50. As at yesterday, its market capitalisation stood at RM8.49bil.

Bazlan’s shocking departure was announced on Friday with immediate effect. He took over as acting group CEO of TM from Datuk Seri Mohammed Shazalli Ramly, who quit in early June, not long after the Pakatan Harapan government came into power.

While TM has not said why Bazlan left, the market is abuzz with talk that TM is facing “challenging times with pressure mounting on its performance and it is slow to act when the government wants the country wired up with fibre sooner”.

Imri Mokhtar has taken over from Bazlan as the acting group CEO. Imri is a home-grown talent with a background in strategy and business operations, having helmed Unifi successfully over the last few years.

Whether Imri will eventually be confirmed as group CEO remains to be seen, but for now, he has to drive TM forward. The decision to appoint a group CEO lies with “TM’s special shareholder and it has its own due process”.

“What TM needs is someone with marketing and technical knowhow to whip TM into shape by streamlining the structure, make it flat and make everyone accountable. With a workforce of 24,000, TM can do a lot more and it has to optimise and sweat its assets,” said an industry executive.

The executive added that “by just cutting down on the overheads, it can show better earnings”.

Yesterday, the regulator – the Malaysian Communications and Multimedia Commission (MCMC) –slammed TM for a 43% rise in complaints since 2017. MCMC said it had received 7,946 complaints about TM’s services, representing an increase of 43% from the 4,528 complaints received in 2017.

The regulator said TM, as the largest fixed broadband provider in the country with an 85.97% market share of total subscribers, has affected many Malaysians that depend on its services daily with its inaction. Consumers want better services for the money they are paying TM.

Even Communications and Multimedia Minister, Gobind Singh Deo, has been harping on the need for the country to be wired with fibre and the need for Streamyx users to be upgraded.

In response, TM issued a statement saying that it was listening to its customers.

TM was “committed to continuously investing in the best fit for purpose technologies to bring high-speed broadband (HSBB) to Streamyx customers who are currently residing in non-unifi areas. Where technology permits, we are doubling the Streamyx speed at the same price of their current broadband plan, with upgrades up to 8Mpbs or offering them wireless broadband LTE 4G solutions”, it said.

TM said it has been continuously investing in its infrastructure - both the fibre and copper networks - over the years to provide connectivity and also to elevate the experience of both its unifi and Streamyx customers, concurrently. The primary focus is on expanding Malaysia’s HSBB coverage.

It added that close to 180,000 of those in non-unifi areas can look forward to receiving this free speed upgrade and aims to complete the upgrade by December.

“In order to address the remaining 500,000 Streamyx customers, we are calling for discussions with the government to quickly reach a mutually beneficial outcome for these customers,” TM said.

Last month, TM said it plans to raise RM4bil via the issuance of sukuk to fund its capital expenditure (capex) and business operating requirements.

However, in July, TM revised downwards its revenue growth and capex for the year, citing increasing regulatory pressures, intensifying competition and the potential revision in broadband prices.

The group has revised its key performance indicators for revenue growth to -1% to flat growth, from a targeted 3.5% to 4% growth previously, and its earnings before interest and tax to about RM1bil.