Citing the National Property Information Centre (NAPIC) data, it said the secondary property market makes up about 80 per cent of all residential property transactions in the country, compared to around 20 per cent of new properties (the primary market).

Among the more talked-about is the crowdfunding peer-to-peer platform to help ease the overhang facing the country. Whether this alternative to finance housing will help, only time will tell as more details filter out over the next couple of weeks.

But the overhang and high housing prices versus affordability do not seem likely to be resolved any time soon.

In the words of Tony Pua, political secretary to Finance Minister Lim Guan Eng, there is always the bitter and the sweet when designing Budget 2019.

“The biggest problem is the backlog (of unsold completed units, known as overhang). The bulk of that backlog are homes priced between RM250,000 and RM700,000.

“The intent of the budget is to bring relief to the overhang via a six-month stamp duty waiver to ease the burden of potential buyers. Hopefully, this will clear the existing stock.”

According to the National Property Information Centre (Napic), there were 29,227 overhang residential units in Malaysia as at the first half of 2018, valued at RM17.24bil. If serviced apartments, which are built on commercial land, are included, the value of the overhang rises to about RM22bil. 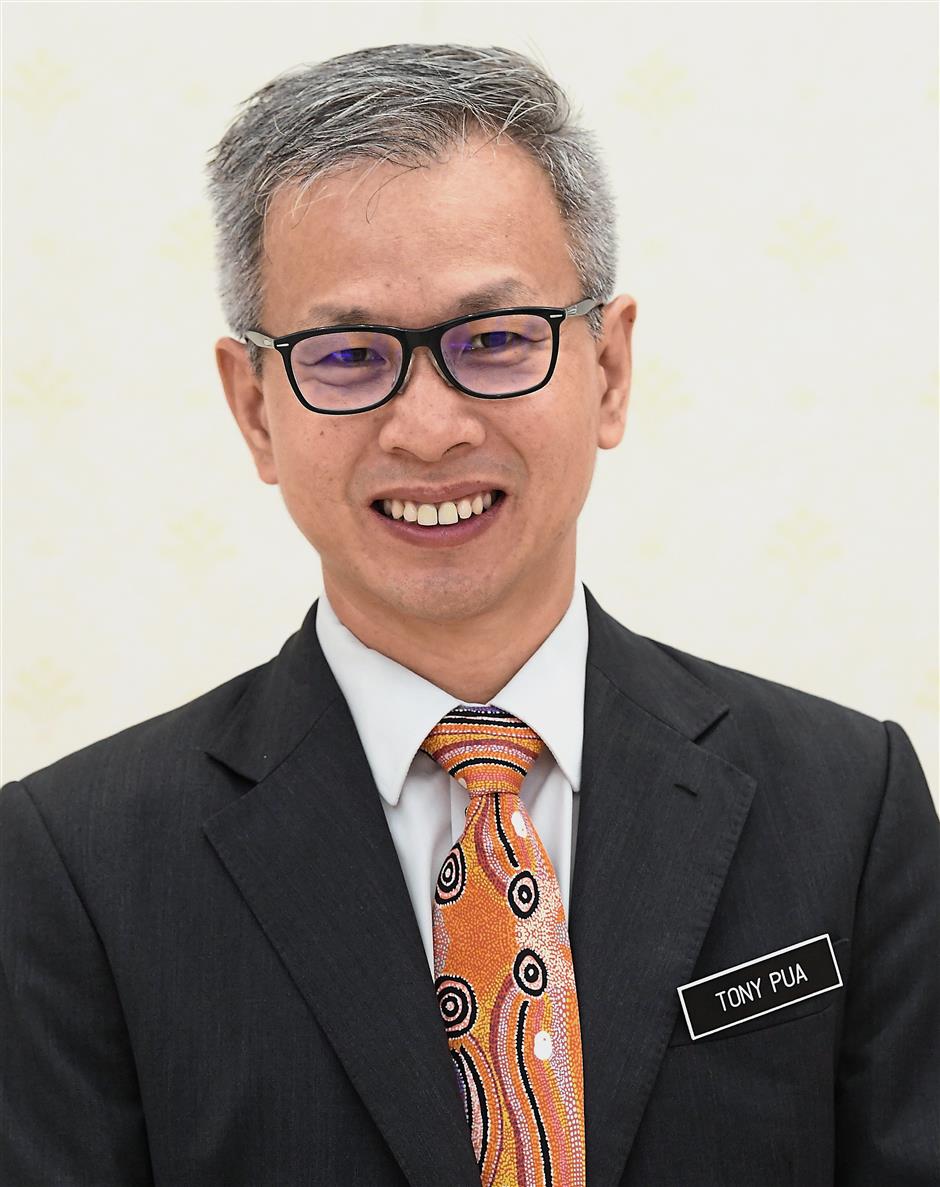 Pua: The biggest problem is the backlog of unsold completed units.

“The overhang is well-spread out among all price categories. Up to a third of the overhang are units priced below RM250,000, with about 40% priced above RM500,000.”

Napic defines overhang as the unsold units that have been completed, yet remained unsold for more than nine months after their launch. Last November, Bank Negara said the number of unsold residential properties was at a decade-high.

However, in spite of the overhang situation in the country, some industry experts still believe that the local residential property market is facing an undersupply of housing stock.

At the 11th Malaysian Property Summit 2018 in January, CBRE|WTW managing director Foo Gee Jen observed that a mismatch of price, location and products has led to this conundrum. 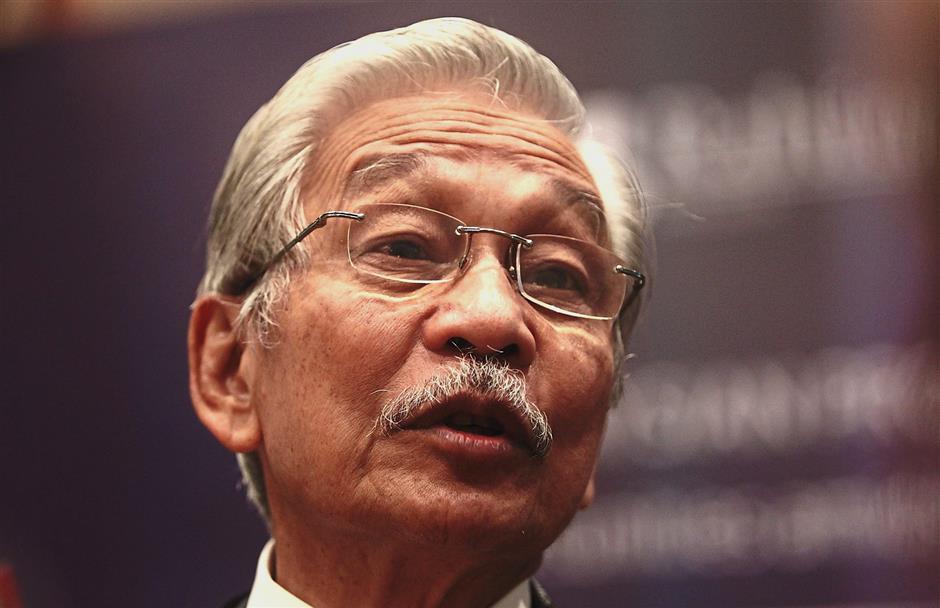 Abdul Rahim: Very few countries have done it and we don’t know if it will work here.

“Over the past 13 years, household incomes in Malaysia have generally moved in tandem with house prices.

This, he says, has contributed to the high level of overhang in the country.

At Budget 2019, the government announced a crowdfunding platform with the aim of helping Malaysians that have been struggling to purchase their first property via peer-to-peer money lending.

Under this scheme, the buyer will be able to acquire a selected property with 20% of the price of the premises. The remaining 80% will be borne by potential investors who fund the purchase in exchange for its potential appreciation in value over a particular period of time. 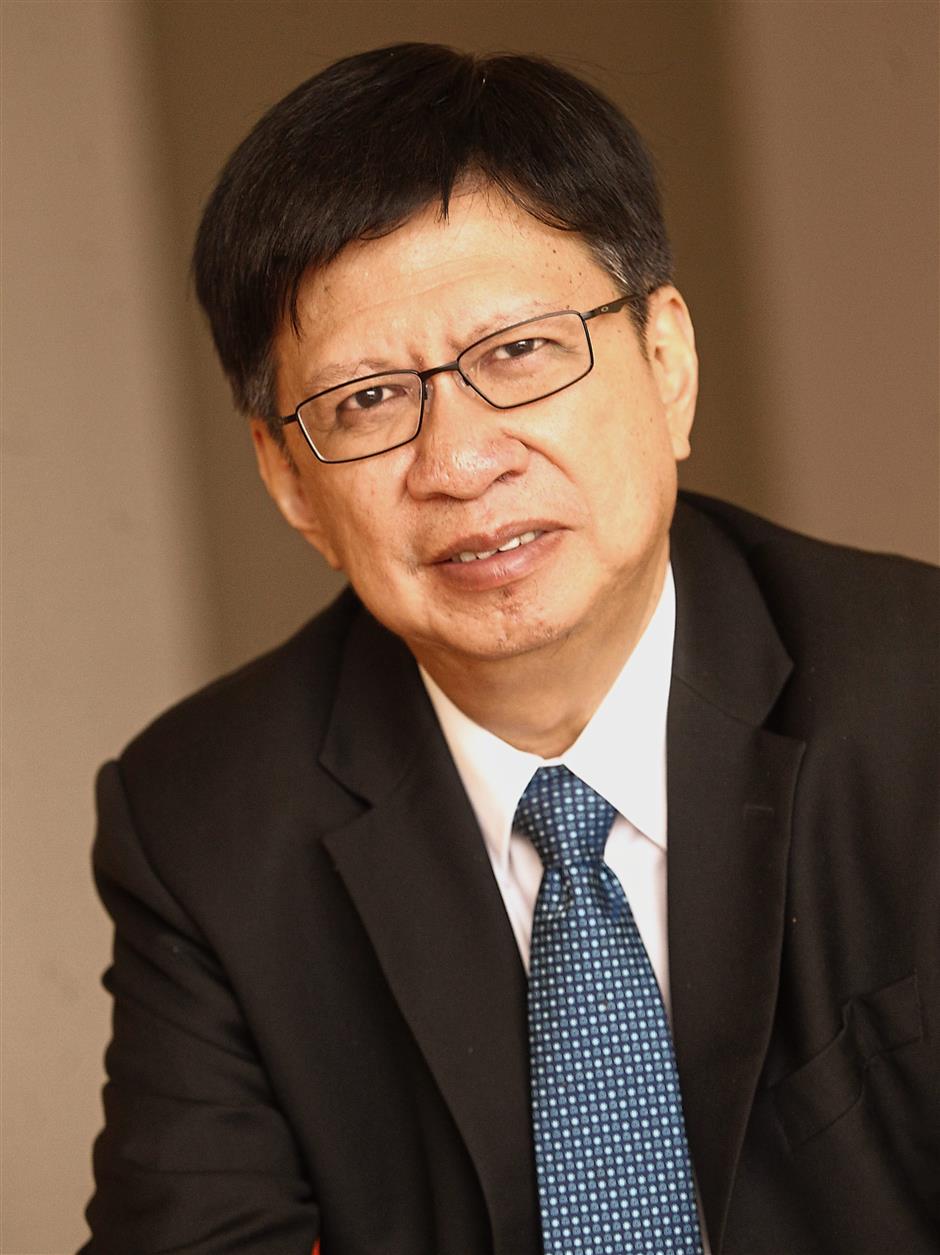 Know the scheme: Chung says he is not against crowdfunding but feels that buyers should know what they are getting into.

“The participant is not buying the house. Traditionally, when I buy a house and charge it to the bank, I lock in the price at the point of transaction. Under the FundMyHome scheme, I pay 20% now but five years from now, I have to pay 80% of the then-market price.”

Chung clarifies that he is not against the crowdfunding platform.

“It can benefit some people and there is space for this form of funding. But the buyers must know that they are getting into an investment scheme and are not actually buying a house.

“A buyer must ask himself, if the interest rate goes up, what is the scenario? If there is a price decrease, what’s the scenario,” Chung says, adding that whether such a scheme will help towards home ownership is another question.

He says the issue today is whether the people seeking bank loans are credit-worthy.

“This is what our banks are evaluating. They need to evaluate based on credit assessment. Rental is an option but what Cagamas is supporting is rent-to-own (RTO) schemes and this is something we should move into, and not just renting. RTO schemes ultimately leads to ownership.” 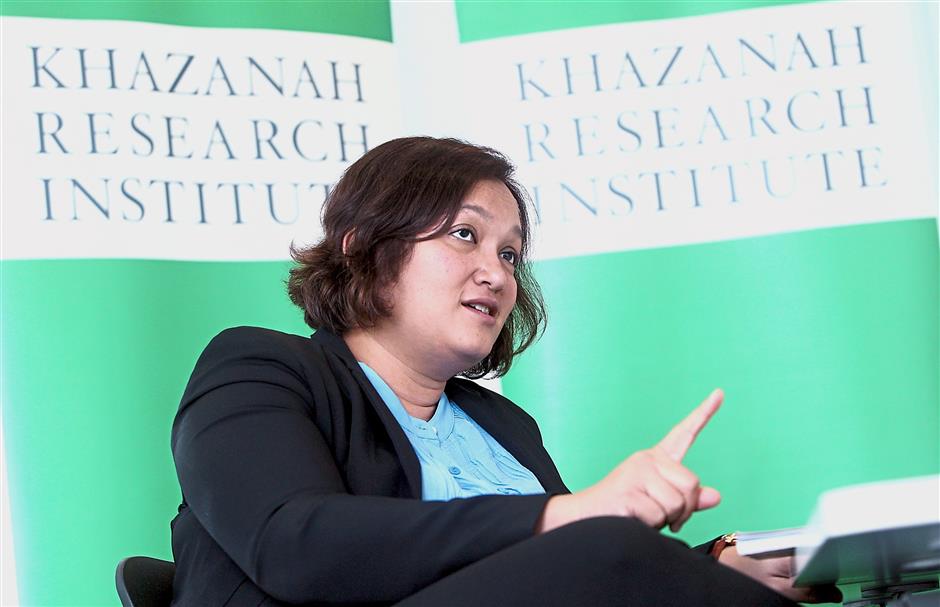 Different angles: Suraya says there are two sides to the coin in affordability issues.

Chung adds that there is a stigma to social housing in Malaysia that is absent in some countries.

“Besides these two forms of funding, the other forms of funding a house purchase include property trusts, mortgage trusts, borrowings or real estate investment trusts (REITs).

Abdul Rahim, meanwhile, says that the crowdfunding scheme is a good initiative to offer, adding however that it is still too early to tell if it would be an effective one.

“Very few countries have done this and we don’t know if it will work here. It’s a new concept, still in its preliminary stage. The question is how the public will accept it.”

Khazanah Research Institute director Suraya Ismail says there are two sides to the coin in affordability issues – household income and house price, and whether developers are able to build houses that can be backed by the income of the people living there. 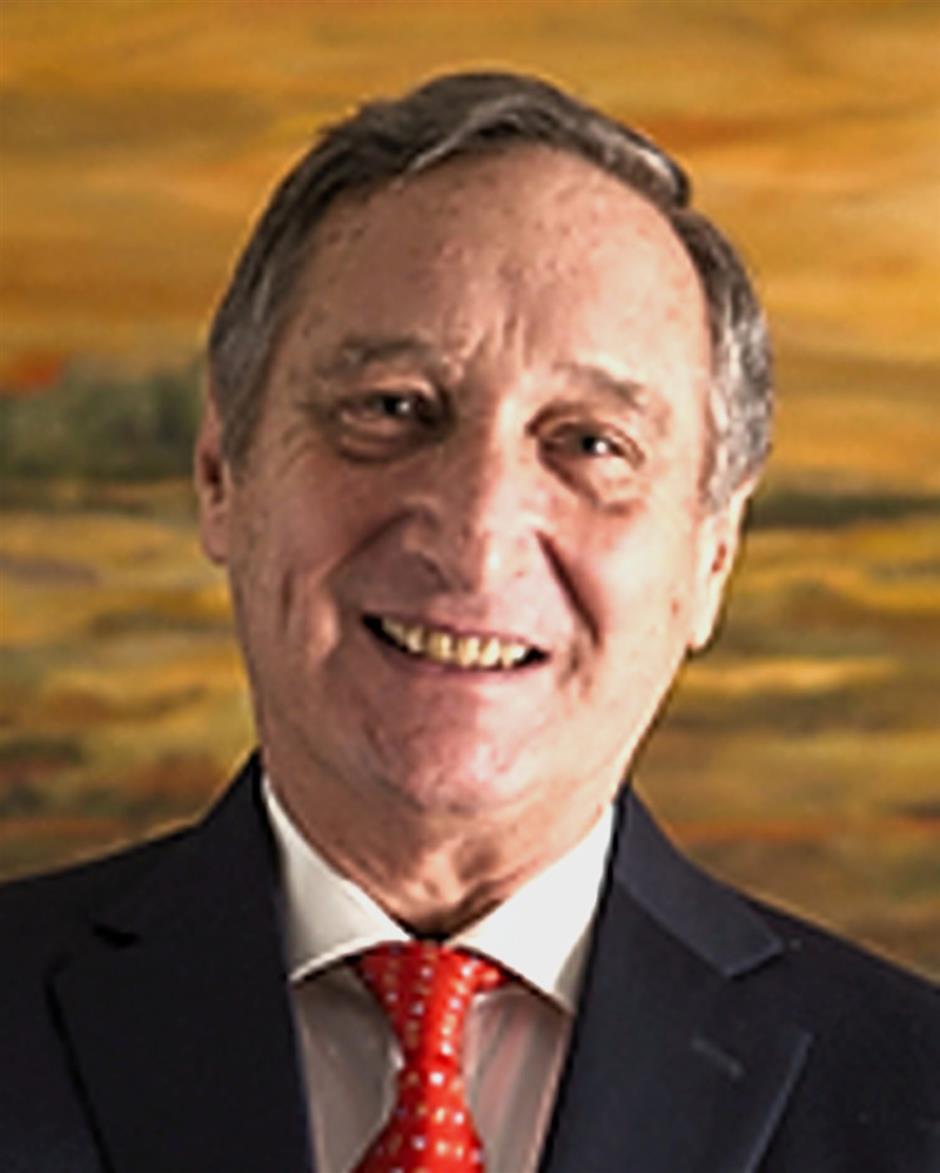 “House prices must be affordable first before financing makes owning a house affordable. The finance system makes it seem affordable because the buyer is just looking at repayment of mortgages.

“The plan to extend housing loans from 35 to 40 years and reducing interest rates are strategies to make repayment affordable and does not address the issue of high house prices.”

Suraya says she is not advocating renting in perpetuity.

“First of all, first-time house buyers need to save for it. So they may consider buying in their early 30s. The scheme we have must be based on demographics and we cannot cut and paste from other schemes found in other parts of the world.

“After a person has saved sufficiently, then he buys a house. The average holding time (of a house) is between 20 and 30 years. If a person earns about RM5,000, he buys a lower priced house first and then upgrades when the family grows.”

However, the real situation today is that most people can only afford to buy one house - which ends up being the home they grow old in.

“This is important at each different income strata. So at each level, the house must be affordable and the design must be suitable as it caters to the aging demographics.

“We do not want rapid price increase of properties backed by finance that creates a sub-prime situation. The entire country suffers so there is a need to empower buyers to understand this.

Notwithstanding that, she says some households will have to live in social housing.

For the commercial property sub-sector, Thong says he does not expect much growth or demand within this segment because of the oversupply situation in both office and retail space.

Meanwhile, at Rahim & Co’s one-day seminar on the Malaysian property market, titled “Where are we heading post-GE14,” Savills Malaysia executive chairman Datuk Christopher Boyd says the office sector has a large impending supply, with 20 million sq ft of space scheduled for completion by 2022.

“New supply is decelerating, but vacancy rates continue to rise. Kuala Lumpur city would have the greatest impact, with 9.7 million sq ft completing in the next three to four years.”

He says market absorption in Greater KL has lagged over the past two years, with the absorption in 2017 being half of the space in 2013 and 2014.

“Average absorption recorded 2.5 million sq ft per annum from 2013 to 2017. This was heavily dependent on the oil and gas industry and financial services sectors. Furthermore, there were several companies relocating from old office buildings to newer ones.

“Nevertheless, most recent office completions are of higher specification than older buildings and therefore fetch higher rents. Yields are under pressure, resulting from higher construction costs and weaker rents.” 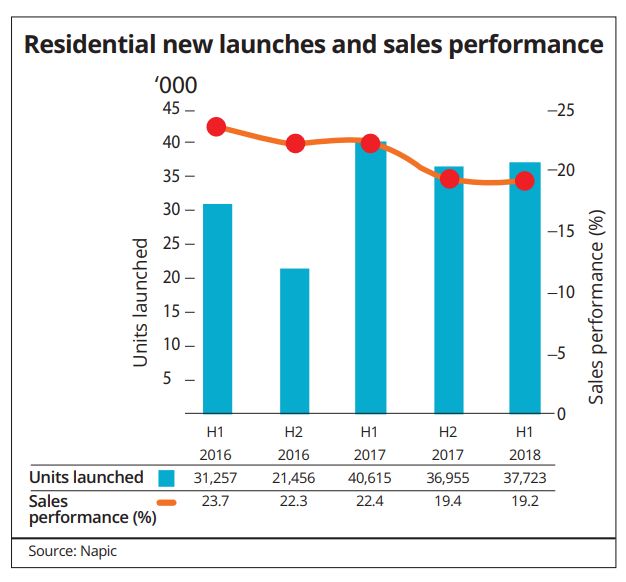 He adds however that the ongoing digital disruption in the retail industry will push retail players to adapt to the rapid changes in the market in order to remain competitive.

“Rental rates in less prime malls are expected to drop amidst lower occupancy rates. To stay ahead of the fast-changing retail landscape, retailers and landlords need to adapt, whereby the boundaries between the physical and digital become increasingly blurred.

“Providing value to shoppers will be essential for customers retention, as online marketplace enables convenient and almost instantaneous comparison of products and of products and services.”

Adzman says that prime shopping malls within the KL city centre commanded the highest rates, ranging from RM25 to RM220 per sq ft per month in 2017 and 2018.

Citing a report by The Star, Adzman says there will be an estimated 6.58 million sq ft net of lettable space from more than 10 malls that will be opened in the Klang Valley by the second half of 2018.

“This will add on to the total of 57.5 million sq ft of existing lettable retail space,” he says.

Abdul Rahim says in spite of the glut currently, he is optimistic that the market will eventually improve, pointing out that the local property sector had recovered following two recessions in the past.

“The current situation is not a recession, it’s just an oversupply situation. In this case, the developer needs to be prudent in what they are offering. It must be something that is sellable given the current market situation.”

Axis REIT Managers Bhd head of investments and former Malaysian Institute of Estate Agents president Siva Shanker says although things look bad now, he emphasised that it “won’t be like that forever.”

“Everything is a cycle. All signs are indicative of an improved market in 2018. 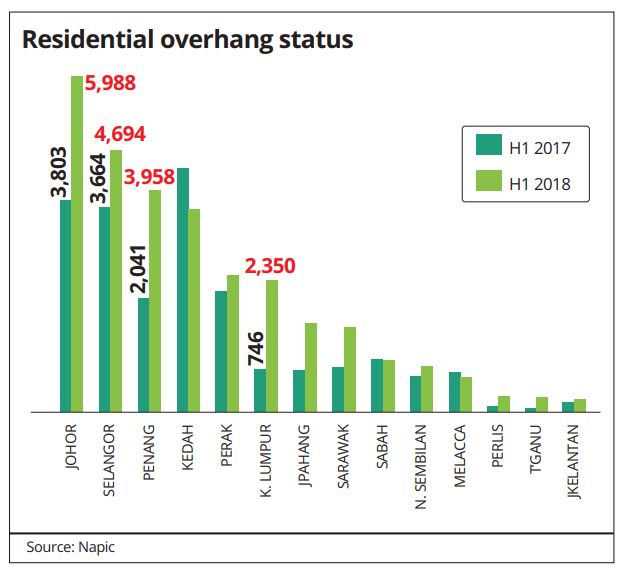 “There has been a feel-good factor in the air following GE14. With the new government cleaning house, investor confidence will slowly return. The economy should remain stable with the support of domestic consumption and investment.

Siva says the first half of 2018 saw the market slowly finding its footing.

“The knee-jerk reaction has begun to subside. The second half of 2018 and going into 2019, we will see the market beginning to level out and start its upward trend again.

He says there also needs to be alternative asset classes of investment.

“Commercial properties will become a more popular alternative asset class for investors. With relatively cheaper properties in satellite suburbs, the market has no choice but to move outwards.”