It noted that during the June to August 2018 quarter, postpaid market activities were largely quiet. U-Mobile (UM) raised its brand’s visibility with a new RM50 per month unlimited plan.

This has no impact on the Big Three so far as they haven’t launched any new offers within this quarter.

However, UM’s plan may appeal only to a specific segment due to a 5Mbps speed cap and their weaker network coverage.

The prepaid market stayed active despite no major change in the overall competition.

Meanwhile, TM has further cut the complimentary 4G quota in its #Bebas plan and limited one free SIM per sub.

On the international direct dial front, Digi raised its headline rates to Indonesia, Myanmar and India, while tariffs from other operators were largely unchanged.

The broadband front however, saw shockwaves in its competition as TM announced free 8-10x speed upgrades for existing unifi Home subs, in anticipation of more attractive offers from competitors after the enforcement of the mandatory standard on access pricing.

Its 30Mbps Home Fibre plan was priced lower than our expectations at RM89 per month, forcing TM to extend its 30Mbps RM79 per month offer beyond B40 households, while Maxis’s Business Fibre plans undercut TM’s entry-level package.

The second quarter of 2018 (2Q18) saw service revenue pick up by the quarter on quarter (q-o-q) yield. The industry revenue rose around 1.4%.

Analysts remain “neutral” on the Malaysian telecom sector, with Digi as the top pick. “Hold” ratings are given on Axiata, Maxis and TM.

THE research house opined that the Federal Government would need to implement some mega projects in two to three years’ time to ensure healthy level of construction activities is maintained, especially before the next general election by 2023.

The construction index nosedived 30.9% from 281.13 points to a multi-year low of 194.36 points, as investors fled construction stocks, concerned about the uncertainties in the sector after the change of government in 14th general election.

Malaysia and Singapore has signed an agreement to postpone the construction of KL-Singapore High Speed Rail for two years, up to May 21 2020.

For Pan Borneo Highway in Sabah, the government is currently reviewing the project and exploring various ways to bring down the construction costs, which may include exclusion of the role of project deliver partner and more transparent procurement method.

On MRT3, the Transport Ministry clarified that the project is postponed, and not scrapped.

It was stressed that MRT3, which benefits the people would be given priority when the country’s financial position improves.

SRS consortium, which is led by Gamuda and is involved in the RM32bil Penang Transport Master Plan, has targeted to secure the necessary approvals from the government by the end of 2018 and aims to kick-off the construction works by mid-2019.

However, the Transport Minister Anthony Loke recently said a key component in the master plan, the Bayan Lepas LRT line, which is estimated to cost RM8bil, may not happen as it may not be the best mode of transport for Penang.

The plan under SRS Consortium is intended to be funded by revenue generated from the Penang South Reclamation project, comprising three islands with an estimated land area of 4500 acres.

Analysts view that it is less likely to be impacted by the federal government’s budget constraints.

The Sarawak Government is rolling out Coastal Highway and second trunk road with an estimated cost of RM11bil.

The entire project is anticipated to be complete by 2030.

Given the lingering uncertainties in the sector, analysts maintain “neutral” call.

Stock wise, we upgrade Gamuda, one of the most successful local infrastructure players, from “hold” to “buy”.

Given its strong track records in highway construction, we see Gamuda a likely candidate to secure work packages for Pan Borneo Highway in Sabah and Sarawak Coastal Highway.

SunCon and WCT has been upgraded from “sell” to “buy” as we think value has emerged after a sell-down in the stocks post second quarter results.

ENERGY service group Serba Dinamik’s gearing will jump significantly from 0.25x in financial year 2017 (FYE17) to about 0.5x by the end of this year. This is due to the round of acquisitions.

Analysts maintain that the levels will still be manageable.

Analysts are “positive” that these acquisitions will improve the management, repair and overhaul business while providing opportunities to access projects and markets which are complementary to the group.

The acquisition will be financed entirely by cash via the proceeds from the IPO of which RM95mil had already allocated for business expansions through investments and acquisitions.

Analyst remain optimistic on Serba Dinamik’s growth prospects underpinned by increased demand for asset maintenance as well as on its asset ownership business model which will provide stable earnings streams.

However, while bullish, the future earnings of the acquisition will likely be longer-term in nature and marginally incremental for now.

“Outperform” is affirmed with target price kept unchanged at RM4.69 based on an around 4 times multiple to the future earnings per share (EPS) in financial year 2019 (FY19) of 33.5sen. 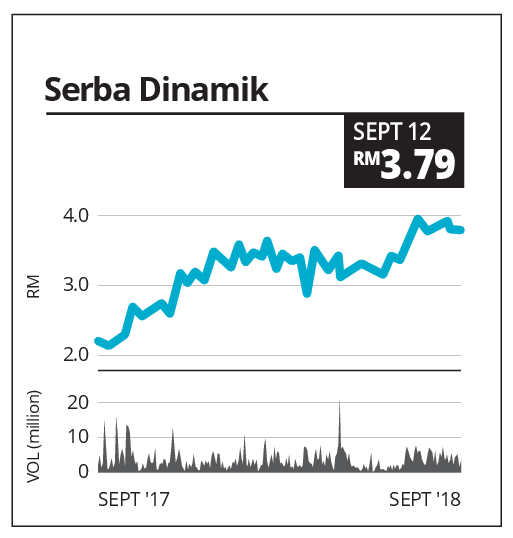