Hope for those planning to own a home

THE government’s initiative to encourage the young and the financially-rickety to be homeowners through affordable housing projects is making many feel hopeful.

Ratha, who is in her 20s, from Perak, wants to buy a house. There are 10 affordable housing projects initiated by the government and Ratha wanted to try her luck.

Despite today’s technology-savvy millennials, Ratha needed a big spreadsheet to keep track of the 10 sets of requirements and guidelines.

Ratha laments that this seems to be the case for many Malaysians trying to get on the house ownership bandwagon. Worse still, not all are equipped with their own laptops, nor do they have easy access to the Internet, she says.

A check conducted by The Star shows affordable houses are priced between RM200,000 and RM250,000 nationwide.

The numbers are staggering - some 4,000 units available in Selangor, 6,000 units in Kuala Lumpur and 656 units in Terengganu. In Perak, the affordable housing units are situated in the outskirts such as in Tin City, Meru Raya and Bagan Serai.

While the numbers are big, they lack accessibility, both geographically and bureaucratically.

“There are various definitions of affordable housing within different state housing agencies and different qualifying requirements,” she says.

Ah Han, 56, left the Klang Valley five years to return to Melaka. Last year, she toyed with the idea of returning to Kuala Lumpur in search of work. “More opportunities,” she says.

A year later, Ah Han is still in Melaka. She does not want to rent but can only afford to pay RM100,000 for a flat.

Both the above are real stories. Only their names have been changed for privacy reasons. The Klang Valley, where the federal capital is located, is attracting many in search of opportunities.

This means there is demand for housing in the Klang Valley, but less so in other states. The situation is even more dire in Kelantan, Kedah and Terengganu, with unsold houses at 48.08%, 48.20% and 44.20%, respectively.

The rural-to-urban pull is not the only reason for the slacking demand in the other states. Accessibility and pricing are other factors.

Despite this, there was no housing priced at RM250,000 launched in Kuala Lumpur as at March 31, 2018 for people like Ah Han and Ratha.

There were some single-storey units and flats launched in Selangor, which is part of the Klang Valley, but the numbers are small.

Despite the huge supply of high-rise housing in the Klang Valley and the general penchant among buyers for landed units compared with high-rise units, the percentage of unsold completed landed property is higher at 24.35% compared with condominiums at 15.80% and serviced apartments and small offices home offices (SoHos) at 13.35%.

From this, it can be deduced that people are interested in landed units but are unable to afford this type of housing.

Because housing is expensive in the city, they do not have the option to live in the type of accommodation or in the location they desire.

At RM1,600 a month, Ratha is sharing a studio unit in Empire City, Petaling Jaya. The place is pretty much still a construction site.

“For RM800 a month, I can rent elsewhere but I want to be near my office. So, I have to bear with the construction site environment,” she says.

Because serviced apartments and SoHos generally have a smaller built-up area of 500-600 sq ft, rendering their absolute pricing lower than a 1,200-sq-ft condominium, the percentage of unsold completed units is 13.35%, lower than condominiums at 15.80%.

Although the previous government, and possibly the current one, has been talking about increasing affordable units priced between RM300,000 and RM400,000, the National Property Information Centre (Napic) overhang report shows that about a third of these completed units remained unsold during the end of the first quarter of this year.

It can be surmised that whatever their earning power, people do not want to live in an environment where they do not know what is going to come flying down from above.

Therefore, there is an urgent need not only to spruce up the physical environment but change the mindset of the population who live in lower-priced housing.

Developers come across as fairly accepting of the current challenges posed by rising unsold-but-completed properties.

Large and small developers display a certain degree of resilience. They believe there will be more upside now that the general election is over.

Quite a number of them are also open about the value of their unsold stock.

group executive director Datuk Matthew Tee says the company’s unsold stock is about RM80mil, with some projects about to be completed. 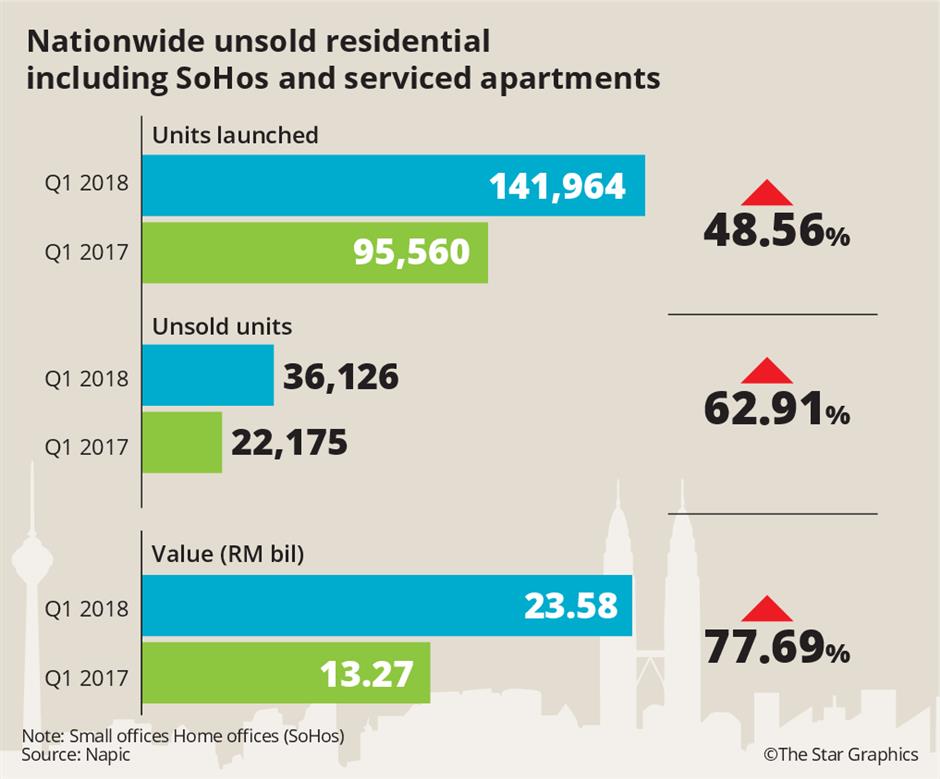 “It is about RM1mil a unit, so this issue of unsold completed units really depends on the project and location,” Tee says.

He says the company is concerned about the RM80mil worth of unsold stock, but will continue to launch projects.

“We cannot stop because there is a holding cost. We have already bought the land,” he says.

Crest Building group MD Eric Yong says he has between RM40mil and RM50mil of unsold stock.

It is “not a major issue”. It was hovering around there last year, but is progressively being reduced at a slow pace.

It is taking longer to sell but “we just have to work a lot harder”.

Yong says the company is spending higher for marketing and other financing costs due to a longer selling duration.

“We are spending 3% to 4% of gross development value to market the property compared to 2% before,” he says.

There are larger developers who have between 41% and 49% of completed inventory as a percentage of their full-year revenue, a private developer source says.

Mah Sing’s Leong says there is demand for completed homes.

“They want to move in hassle-free and we have observed improvement in the take-up rate of our completed units,” he says.

Sentiment is improving due to various measures by the government, although financing is an issue.

The company’s main audience are owner occupiers and long-term investors.

“We are currently focusing on project affordability with a RM500,000 benchmark, location, concept and providing value-added services for buyers and owners,” he says.

Leong says Mah Sing’s focus is 74% of targeted sales for residential properties in 2018 being priced below RM500,000.

The company is also optimistic that lending rules will be eased either by banks or with the introduction of new financial assistance schemes from the government.“Mah Sing has been prudent with new launches. Completed unsold units have been progressively reduced through various marketing efforts,” says Leong, adding that completed inventories are cash-flow positive and do not affect the financial strength of the group.

Sunway’s Cheah says there is positive sentiment all around post-election, with demand for quality in liveable areas.

“Our first launch of Sunway GEOLake Residences in the Klang Valley saw a take-up rate of 65%. Of the offered units booked, 90% of registrants signed the sale and purchase agreement on the day itself,” she says.

The company had a preview on July 7-8.

Cheah says considering the current challenging environment, the company has shifted its sales and marketing budget a little to invest in the digital space.

“Business growth will definitely be the challenge because we have to keep selling. Sentiment and affordability will be issues,” Cheah says.

“Our residential products, especially the ones in the integrated townships, appeal to purchasers who are purchasing for their own stay. Regardless of market performance, this segment of purchasers will look at some factors: location, the unique offering of the products and the lifestyle that the development has to offer,” she adds.