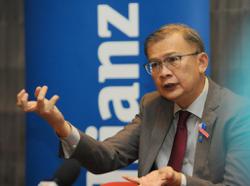 Insurers need to ask themselves tough questions in order to progress

A CHANGE in how the insurance industry approaches the Malaysian market is crucial to ensuring the industry continues to be on a sustainable growth path moving forward.

As it is now, the underinsured population in the country is still high with a penetration rate of around 56% in the life insurance segment.

The figure has been stuck at a low gear for quite some time and a new approach as to how insurers tackle the Malaysian market is key to turning things around, more so especially with the huge advancements in medical science technology.

“There must be a rethink as to how we provide insurance to Malaysians in both the life and non-life business segments.

“The underinsured population in Malaysia is still considered to be high especially if compared with the more advanced economies. We are certainly not a third world country so we cannot compare ourselves to that,” Allianz Malaysia Bhd

“I think we have to ask ourselves what are we doing to increase this penetration rate among the population. As it is now, our usual approaches like how other countries do it is not so effective. The market is stagnant now.

“Insurance is usually bought as an afterthought and not when everything is going well. It is also a measure of disposable incomes in the country,” Zakri says.

On this end, Allianz is optimistic on growth prospects in the third and fourth quarter of its financial year 2018.

The company had experienced strong growth in the past five years since 2013.

“The economy should start to pick up then and am fairly confident that profits will be good for FY18 in both the life and non-life business. We are anticipating growth in terms of topline of about single digit growth.

“There is very little opportunity for double digit when the economy is just starting to heal itself,” he says.

“There is a connection between insurance and disposal incomes. People just don’t spend on insurance: they only spend if they have enough to put aside for insurance.

“Wage inflation has been rather stagnant for the last couple of years and thus disposable incomes,” he adds.

He notes that Malaysians and Asians in general would rather buy insurance for savings but not for protection.

“This is the general trend here. But the reality here is that the way insurance companies operate here is very inflexible and that is why it is not very attractive to the public. It it not the same in some other (advanced) countries. It is not an unjustified criticism but rather the reality and truth of the state of things,” he says.

“The insurance industry seems to be too concerned with bottomlines rather than doing what the industry is supposed to do, which is to provide protection to people,” he adds.

It is time to reconsider how risk is looked at or underwritten in the insurance industry as current methods seem to be too inflexible when compared with the advancements in technology today, he notes.

A case in point is the company’s latest medical insurance offering.

Amid improved medical technology that increases the chances of detecting illnesses at an early stage, Allianz had gone against the current and introduced a medical insurance for diabetic patients.

“This should be a product that helps change mindsets. Insurers should not only insure people with no problems as this is unfair.

“Of course there are conditions and some we cannot accept then we have no choice but to decline. But things like type 2 diabetes is alright as it can be controlled,” he adds.

Zakri also says that other improvements that needs to be addressed is in the area of education including education of the public and of insurance agents.

Further commenting on the low insurance penetration figures, Zakri says that this situation has been going on for some time.

“There are many types of coverage that people don’t buy and it has been going on for years.

“For example the general insurance market, the penetration is one and a half policies per person (mainly from motor insurance), that’s all.

“So people don’t buy personal accident or other types of coverage etc,” he says.

“Looking purely from the premium increase does not reflect the actual consumption of insurance as the underlying consumption is still not there.

Meanwhile, Zakri says Bank Negara should not waver from its directive to compel insurance companies with foreign owned shareholders to reduce their stakes to a maximum of 70%.

“I agree with Bank Negara here. For Allianz, we were the first to do it. We listed the company and today we already comply with it.

“When you operate in any country, you comply with their rules,” he says.

“The policy should be that. It is only 70:30 and it is higher than the requirement those days.

“It is a good move to keep domestic participation active in the insurance industry,” Zakri adds.