But for the number forecast operators (NFOs), there is likely less reason to cheer.

With some punters expected to put their money on football betting rather than number or lottery games during this month-long tournament, NFO players such as Magnum Bhd

(BToto) will likely see a short-term disruption to their ticket sales that have been on a recovery trend in recent months after several years of decline.

If the 2014 FIFA World Cup season were any gauge, however, the negative impact on NFO revenue would likely be mild.

According to UOB Kay Hian’s estimates, during the last FIFA World Cup season, NFO players saw a year-on-year (yoy) drop of between 3% and 3.5% in their quarterly ticket sales. So, the brokerage reckons the current edition of the four-year cycle tournament could also have a similarly benign short-term negative impact on NFOs’ revenue.

On the local bourse, NFOs have been one of the best performers since the market resumed trading after the shocking outcome of the 14th General Election (GE14), outperforming the benchmark FBM KLCI. 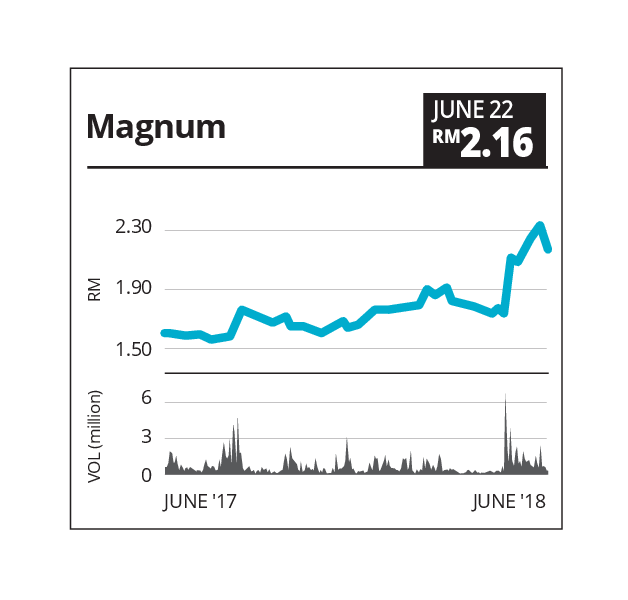 The outperformance of Magnum and BToto’s shares against the general market post-GE14 is mainly attributable to their defensive nature, with attractive dividend yields. This is an important trait sought by investors given the uncertainties surrounding the policy direction of the country under the new government led by Pakatan Harapan.

In addition, investors also perceive that gaming companies will benefit from the recovery in consumer sentiment on the back of the Government’s initiative to zero-rate the goods and services tax (GST) and reinstate petrol subsidies to alleviate the rising cost of living.

Despite the recent rise of their share prices, NFOs continue to be attractive dividend plays, with Magnum and BToto sitting on compelling forecast yields of around 5% to 7%.

Even so, and despite relatively inexpensive valuations, upsides are likely to be gradual for NFOs after the recent run-up in their share prices, as lingering uncertainties continue to weigh on investor appetite for these gaming counters.

Magnum, which fell two sen to close at RM2.16 yesterday, was valued at 13.7 times the consensus estimated earnings for its financial ending Dec 31, 2019.

BToto, which gained four sen to close at RM2.47, on the other hand, was valued at 11.5 times the consensus estimated earnings for its financial ending April 30, 2019.

Their valuations remain at multi-year lows, as both Magnum and BToto’s share prices have been on a downtrend over the past five years, as a result of declining sales amid poor consumer sentiment and cannibalisation from illegal operators.

The worst could be over for the NFO players, though.

According to analysts, recent financial results indicate the downtrend of their ticket sales has likely bottomed out.

Kenanga Research, for one, in its recent report argued that the selling pressure on NFO players have somewhat abated, as NFO’s ticket sales have stabilised and the “luck factor” normalised.

“Given that the ticket sales downtrend should be over, and coupled with improved luck factor, NFOs are certainly dividend-yield plays,” the brokerage said. “The NFO industry has seen sales stabilisation in the past two quarters after years of decline in ticket sales. We expect the industry to see positive ticket sales growth in 2018, although it could only be mild at low single digit,” the brokerage explained.

While UOB Kay Hian reckoned that the NFO segment’s upside should be more gradual after May’s spectacular share-price rally, newsflow-driven catalysts were still on the cards.

“We expect the next meaningful share price growth leg to be newsflow driven, such as legalisation of online betting, more rigorous measures to counter illegal gambling by the new government as well as Magnum’s company specific newsflow,” it explained.

UOB Kay Hian noted that Prime Minister Tun Dr Mahathir Mohamad’s recent remarks that the Government would investigate whether certain businesses were harassed by the IRB into paying more taxes than what was due could imply a lower chance of Magnum having to pay the RM476mil IRB penalty.

Hence, it said, for Magnum, in particular, there could be potential upside from the newsflow standpoint, stemming from the potential listing of the company’s 6%-owned U-Mobile Sdn Bhd and the cancellation of the IRB penalty, as well as potentially higher dividend yield.

The potential listing of U-Mobile would allow Magnum to cash out from its investment, which in turn, allows Magnum to significantly enhance its well-established capital management practice, UOB Kay Hian explained.

In addition, the brokerage said it conservatively assumed a 70% earnings payout for 2018-2020 by Magnum, pending the final outcome on the company’s IRB penalty court case. Prospective yields would be 6.6%-7.0% should the payout ratio increase to 90%, it said.

Despite stabilising sales, there are still some uncertainties facing the NFOs.

For instance, while the removal of GST will benefit these companies, there are still questions about whether the Pakatan Harapan-led government would introduce other form of tax replacement or increase the betting duty to minimise the loss of revenue from the gaming sector, and whether the government would make strengthen the gaming regulation to clampdown on illegal operators.

A change to the tax structure for the gaming sector could impose a downside risk to NFO’s earnings, while a crackdown on illegal syndicates could help legal NFOs regain market share, and hence, improve sales.

Magnum saw its net profit increase about 80% yoy to RM54.94mil for the first quarter ended March 31, 2018, driven by its gaming division on higher ticket sales and lower prizes payout ratio.

BToto, on the other hand, saw its net profit decline 2.8% yoy to RM230.45mil for the financial year ended April 30, 2017, due to impairment of goodwill relating to leasing of lottery equipment business in the Philippines as well as the lower results reported by its unit Philippine Gaming Management Corp. This was despite the better performance by its principal subsidiary, Sports Toto Malaysia Sdn Bhd, and its UK-based luxury car dealer HR Owen plc.