Flattish fee income and lower trading gains led to a 7.1% y-o-y contraction in non-interest income, and were the key areas of weakness.

Disciplined cost control allowed the group to deliver a positive operating JAW with cost-to-income ratio declining to 47.6% in Q1’18 (Q1’17: 50.2%) and consequently a stronger 10.8% y-o-y growth in operating income as compared to a more modest revenue growth of 5.4% y-o-y.

Day 1 adoption of MFRS9 resulted in a 33% y-o-y increase in provisions taken through the balance sheet via retained earnings, which consequently led to a 39 basis points (bp) quarter-on-quarter (q-o-q) decline in fully-loaded CET1 to 13.7% as its regulatory reserves were not sufficient to fully meet the higher provisions and Bank Negara’s minimum impairment and provisions buffer equivalent to 1% of Stage 1 and Stage 2 loan exposure at default.

As expected, credit cost declined y-o-y despite the adoption of MFRS9 as the group was still impacted by oil and gas-related impaired loans in Singapore in Q1’17.

However, on a q-o-q basis, net credit cost normalised sharply upwards 42bp from 16bp in Q4’17 on the back of lower recoveries and MFRS9 adoption.

“Despite its recent share price weakness, current valuation at 1.38 times FY18 price-to-book ratio is fair against our return on equity (ROE) forecast of 10.4%.

“Despite Maybank’s perceived defensiveness, we think that there could still be risk relating to its Hyflux exposure and uncertainty towards government-linked project financing that could be impacted by the new government’s policy changes,” said UOB Kay Hian. ALTHOUGH revenue for the ports and logistics segment was down only 8% year-on-year (y-o-y), its profit before tax declined by 46% y-o-y in Q1’18.

The decline was due to poor performance from Johor Port and Northport, both suffering from lower activities.

Container volume at Northport continued to decline post the forming of the new shipping alliance.

While Port of Tanjung Pelepas has benefited from the alliance, the gain is not sufficient to compensate for the revenue loss at Northport.

Profit before tax from the engineering and construction (E&C) segment increased by 184% y-o-y due to higher progress recognition for the Klang Valley MRT line 2.

Although the research house anticipates stronger contribution in the coming quarters, the future might not be as rosy, as the new government is re-looking at the feasibility of nationwide mega projects with the possibility of cancelling them.

MRT 3 and the Pan Borneo Highway jobs are some of the projects that are being reviewed, in which MMC has a role.

“Apart from lowering the value of its ports operation on the back of the earnings forecast revisions, we have also lowered the valuation of its E&C segment, which is the main reason behind the cut in our realised net asset value (RNAV)-based target price to RM1.50, as we relook at the fair value of each business segment.

“A re-rating catalyst for the stock would be the potential listing of its ports operation, although the recent weak set of results could further delay this prospect,” said Affin Hwang Capital.

Downside risks include weaker volumes at MMC’s ports, cancelling of MRT3, and change in the contract terms for its project delivery partner (PDP) role in the Pan Borneo Highway.

Meanwhile, upside risks are stronger volumes at its ports, and major construction contract wins from the new government. 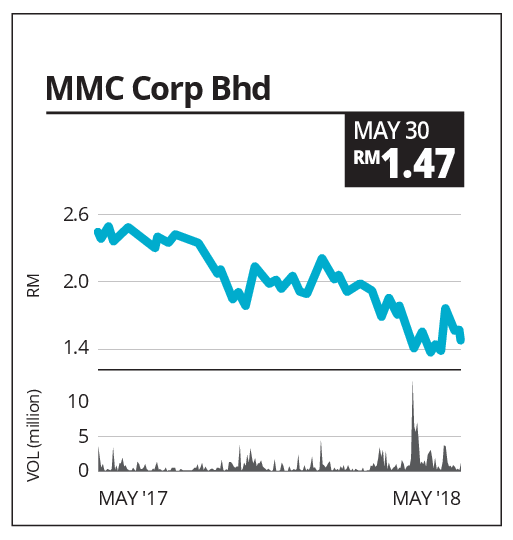 The group’s general insurance segment made up a larger 69% of group pre-tax profit.

The group’s bancassurance (banca) channel contribution continued its downtrend and made up only 1.3% of Q1’18 GWP sales.

Allianz General’s Q1’18 growth was also driven by a decline in management expenses (ME) of 11% dip y-o-y.

Allianz Life’s net earned premium (NEP) growth was higher at 7% y-o-y versus GWP’s growth of 3% y-o-y during the same period.

This is consistent with the group’s strategy of ceding out less premiums to reinsurers.

Segmental expense ratio also moderated to 11.7% but was offset by lower investment yield of 4.2%.

“Our earnings estimates are relatively unchanged as we continue to expect the group to post 2018 core net profit growth of 14% y-o-y, stripping out RM21mil of impairments net of tax in FY17.

“We expect stronger growth in the life insurance business in subsequent quarters to make up 35% of PBT in 2018 before growing to 42% in 2020,” said RHB Research, adding that the group’s continuous switch to investment-linked products will also drive overall margins.

This will be driven by higher auto sales after two years of slumped growth as well as improved consumer sentiment.

The current share price still provides ample upside as current market capitalisation on a fully-diluted basis implies that the market is valuing Allianz Life at only RM800mil. The anticipated QoS (Quality of Service) framework to be implemented by Mavcom from third quarter of 2018 for airports, starting with KLIA1 and 2, with objectives to achieve higher quality of service for passengers, could pose as downside risks for MAHB’s earnings, given that Mavcom has proposed a financial penalty of up to 5% of aeronautical revenue, which could dent FY18 core net profit by 4% for every 1% penalty.

That said, in order to mitigate penalties, MAHB has increased planned capital expenditure to RM600mil to RM700mil, from RM300mil, for FY18 and FY19 to upgrade their infrastructure.

On a separate note, the Transport Ministry has ordered Mavcom to review the present passenger service charges (PSC) in an effort to introduce a new rate by FY19.

According to the MoT, “PSC charges have to be in accordance to the airports quality of facilities”.

“Based on our judgement of this statement, we potentially see lower PSC charges at other international airports aside KLIA Main (i.e. KLIA2, Penang, Langkawi, KK, Kuching) instead of the flat rate of RM73 per pax for non-Asean international flights set out this year.

“Should it pan out as what we think, it would be less favourable for MAHB as revenue collections will be lower than initially expected.

“That said, we remain neutral for now pending MAHB’s final discussion with Mavcom and greater details on this matter by June/July 2018,” said Kenanga Research. 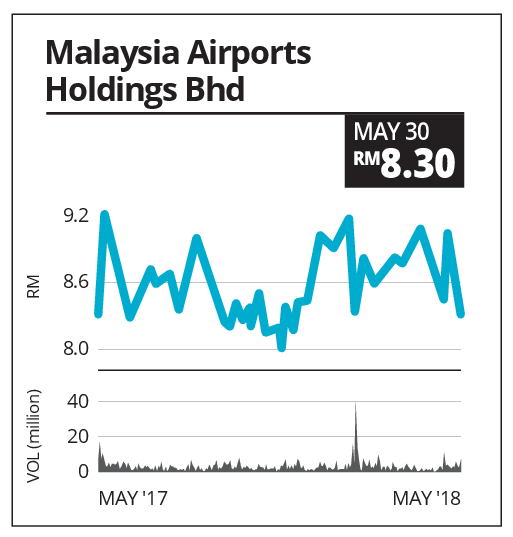