The difference WhatsApp, FB has brought to GE14

Social media impact: A file picture showing party flags in Rembau town during the 2013 election. In the runup to the coming elections, people are paying attention to messages from WhatsApp, Facebook, Twitter and Instagram.

EXITING the North-South Highway into Pedas/Linggit toll booth on a Friday morning, one could see the Barisan Nasional and Umno flags lined up all along the main road leading to the Rembau town. In some parts, there were PAS and Parti Keadilan Rakyat flags, indicating that the parliamentary seat held by Umno Youth leader Khairy Jamaluddin is likely to see a three-cornered fight.

However, a chat with the local folks revealed that the flags and posters were not catching their eye. Forget about the dark blue, light blue and green flags.

While the flags are a colourful sight when they wave against the wind, they do not engage with the electorates.

At the warong, the people are largely fixated on their hand-held devices, mainly their smartphones.

Their attention was on the deluge of messages coming through WhatsApp and Facebook. Twitter and Instagram are not common among the folk in places such as Rembau that is considered semi-rural.

The residents read long messages instead, smiling and releasing an occasional burst of laughter after seeing memes depicting subtle political messages and watching videos with intent.

A video of Khairy acting as a waiter serving coffee in a stall to two classmates who have not seen each other in a long time was among the topic of conversation that morning among some of the Rembau folks.

The message of the WhatsApp video was to tell youths that the government listens to their grievances in wanting higher salaries. It came with several options that the Barisan government has provided for youths to increase their income in the digital economy.

Whether the pakcik at the warong understood the message or found it relevant did not matter. What matters is that he viewed the entire clip lasting less than a minute. He not only saw the face of his prospective member of Parliament but also know that he understands the issues facing the youth of Rembau.

In the old days without WhatsApp, Twitter, Instagram and Facebook, the campaigning was normally done by walkabouts in the market or door-to-door meetings with the people. At night, candidates would hold a ceramah hoping to attract the crowd and convince them.

The cost was high – from printing posters to putting up flags and organising the ceramah. An effective door-to-door campaign needs a well-oiled election machinery that costs money to maintain.

Past election results have proven many a time that the popularity of candidates cannot be judged by the crowds that turn up for the ceramah. The same goes for the door-to-door campaigns where voter sentiment is normally hard to gauge.

Messaging service WhatsApp and Facebook can easily count themselves as the most dominant and effective form of campaigning in the 14th General Election (GE14). Almost everyday, people get messages and videos on the election, They share with their friends and family chat groups.

In GE14, among the popular WhatsApp and FB messages are wealth accumulated by key figures on both sides of the political divide, 1Malaysia Development Bhd (1MDB), Tun Dr Mahathir Mohamad’s track record in managing the country when he was the prime minister, and the goods and services tax (GST).

Apart from that, there are several older video clips of Datuk Seri Anwar Ibrahim and Rafizi Ramli hitting out at Dr Mahathir for his alleged mismanagement of federal government funds and the utilisation of Petronas’ balance sheet to build Putrajaya. There are also clips of key Opposition leaders speaking out against the alleged wealth accumulated by Dr Mahathir’s children.

The Opposition of Pakatan Harapan, on the other hand, has come up with visuals and videos of 1MDB – the troubled fund owned by the federal government under the watch of Najib. The integral part of their attack is against the Prime Minister and allegations of him receiving funds into his personal account, the GST and the rising cost of living.

The reach of WhatsApp and FB is amazing. It is effective and the cost is cheap. In a nutshell, it has reduced the cost of reaching out to the electorate and changed the landscape of political campaigining.

It does not cost much to put up a WhatsApp video or a cartoon. Compared to the old days when door-to-door campaigning was seen as the most effective way, the social media platform has proven to be a much cheaper way to campaign.

It is hard to envisage candidates spending within the amount allowed. However, WhatsApp and FB have brought down the cost of campaigning in the current general election.

In India, it has given hope to small political parties.

The Aam Aadmi Party (AAP) upset the more powerful Congress Party in some seats in Delhi during the 2014 election. It was reported that AAP had used social media such as WhatsApp more diligently compared to the likes of Congress and the Bharatiya Janata Party or BJP to pull off the upset.

For Malaysia, GE14 is the first time where WhatsApp and FB are the common messaging tools used by political parties from both sides of the divide. The country has a high Internet penetration rate, reaching out to most voters.

When the results are out on May 9, we will know the impact. 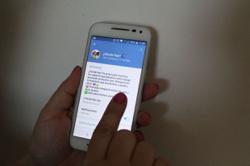