Boost for retail: Christmas decorations at Sunway Pyramid in Petaling Jaya. The coming festive season and elections are seen as a boost for the retail sector.

IT’S a well-known fact that the local retail sector has been under pressure for quite some time – what with the endless supply of incoming space and slowdown in consumer spending.

It was recently reported that the average occupancy rate of retail space in the Klang Valley, which had been falling marginally over the past six years, had hit a five-year low of 86%.

But have things gotten so bleak that the local retail sector has finally reached a tipping point?

Malaysian Association for Shopping and High-Rise Complex Management past president Richard Chan says the local retail sector is very much alive and thriving.

“An occupancy rate of 86% is not just credible – it’s good,” he tells StarBizWeek.

It was reported by real estate services firm Nawawi Tie Leung Sdn Bhd (NTL) earlier this month that as of the third quarter of 2017, total retail stock in the Klang Valley stood at 61 million sq ft and estimated pipeline supply for those under construction is currently estimated at 16 million sq ft, comprising 23 projects.

NTL also said newer malls have been struggling to establish market share, which had been diminishing and become increasingly fragmentary. Other factor: Chan believes the occupancy rate has dropped to 86 not due to oversupply.

NTL said that in recent years, it had witnessed a mall closure in Petaling Jaya as well as increasing occupancy stress, low footfall and retailers’ turnover in some of the newer and older malls.

It said this was matched by slower (or worse), no rental growth as well as an increasing need to provide for tenants’ incentives.

Chan believes the occupancy rate had dropped to 86% not due to oversupply – but rather underperformance of weaker malls.

“To derive at a figure of 86%, it would mean that more than 80% of malls have an average occupancy rate that is higher than 86%. If there is an oversupply situation, then rentals will have dropped.

“But if you check with the top, large malls, rents have not dropped. In fact, many even have potential tenants that are on a waiting list.”

He says occupancy rate of 86% was affected by the very small number of underperforming malls within the Klang Valley.

“Old strata malls are pulling the figures down. There are 10 to 15 year old malls in Cheras that are struggling with occupancy rates of between 20% and 30%.

Chan says many of these malls struggle with occupancy rates because they fail to conduct any proper due diligence prior to building the mall.

“Planning is crucial. Developers need to know the risks. A medium-sized mall could have an investment cost of between RM300mil and RM400mil. What about larger malls?

Some industry observers have concluded that the growth in e-commerce has had an impact on the business operations of the bricks-and-mortar retail operators.

However, Chan says e-commerce penetration in Malaysia is still small.

“It’s about 2% currently, so it’s still quite negligible,” he says, adding that many of the underperforming malls are resorting to desperate ways to boost and retain their occupancy rates.

“Many of them are giving away freebies, discounted and even free rentals. But they are just digging their own graves!”

Chan adds that just because one mall in PJ closed down (as reported by NTL) does not necessarily mean that the local retail industry is doomed.

“It’s just one mall that was highlighted. There are about 250 malls within the Klang Valley, and about 560 nationwide.”

Earlier this year, it was reported that a reputable industry observer was predicting that 50% of shopping malls in the Klang Valley would be fighting for survival within the next five years – and about 20% would close down.

Chan says this is “not happening”.

“If there are 250 malls within the Klang Valley and 20% of them shut down within the next five years, it would mean that up to 50 malls will be closed.”

Chan admits that competition for retail space has intensified over the years, and a drop in occupancy rates has been noticed.

“There has been a drop in occupancy rates but it has been small, maybe as much as 1%. But this is comparable to the amount of new space added, which is between 8% and 10%.”

Chan also says the Government’s move to freeze the construction of new malls in the country is not a good move.

“This won’t improve conditions. Because you are freezing the construction of new malls, rentals will go up, especially in the malls that are performing well. When this happens, potential tenants will have problems setting up their businesses there.

“The poor performing malls will offer lower rents, but no tenant would want to go there because business prospects won’t be good.”

The Government has banned the construction of high-rise luxury residential projects with units costing above RM1mil, offices and shopping malls, effective Nov 1.

Second Finance Minister Datuk Seri Johari Abdul Ghani says, however, it is not a blanket ban on residentials but the freeze on malls and office space remains.

The move comes following Bank Negara’s recent study on the mismatch of housing demand and supply. However, all projects that had already been approved and ongoing projects would not be affected by the decision.

Sales in the Malaysian retail industry contracted 1.1% in the third quarter on eroding purchasing power, according to a report compiled by Retail Group Malaysia (RGM). For the first nine months of this year, the retail sales growth rate was 1.9% compared to the same period a year ago, it said.

RGM said all retail sub-sectors suffered decline in sales in the third quarter, except pharmacy and personal care and other specialty retail stores sub-sectors, which reported a 6% growth.

Despite selling basic necessities, the supermarket and hypermarket sub-sector reported the worst result during the latest quarter. For the third quarter of 2017, retail sale of this sub-sector dropped by 5.2%.

Going forward, members of MRA estimated an average growth rate of 3.8% during the fourth quarter of 2017. “With consideration of the latest poor result, RGM has revised its annual growth forecast downwards again from 3.7% to 2.2% for Malaysia retail industry in 2017. Festive cheer: Ameer says the coming Christmas and Chinese New Year plus the elections will spur the retail sector.

Earlier this week, Mydin Mohamed Holdings Bhd managing director Datuk Ameer Ali Mydin admitted that the local retail segment had been facing a slowdown – which in turn has had a direct impact on the hypermarket industry.

He is however hopeful that the upcoming general election (GE) next year will boost consumer spending.

“We pray that with the upcoming GE, the Government will do something to boost spending,” he said at the launch of the iMeriah Takaful coverage plan on Thursday, adding that he is projecting flattish to minimal growth for the retail sector next year.

Chan also says that the upcoming GE will play a role in determining the outlook for the local retail sector.

“From now until the GE... everyone will be cautious and adopt a wait-and-see approach. But that doesn’t mean people will stay still. Entrepreneurs, especially... will see it as an opportunity and take risks.

“But there will be some growth. Christmas is around the corner... then Chinese New Year and Hari Raya a bit later. These events, together with the elections, will spur spending.”

Malaysian REIT Managers Association chairman Datuk Jeffrey Ng believes the local retail sector will remain challenging in the short to medium term, but may bottom out soon given the improving economy and sentiment.

“With average occupancy rate of 85.9% in the first quarter of 2017 in Kuala Lumpur and Selangor, incoming supply by reputable mall owners may be supported given the subsidies and incentives provided to tenants.”

He says Johor may be able to absorb the supply in the long term, supported by Singaporean shoppers and also the expected increase in residents at the surrounding developments.

“Newer neighbourhood malls, malls in weaker locations and malls with weaker retail management or without strong market positioning will continue to face downward pressure on occupancy and rental rates.” 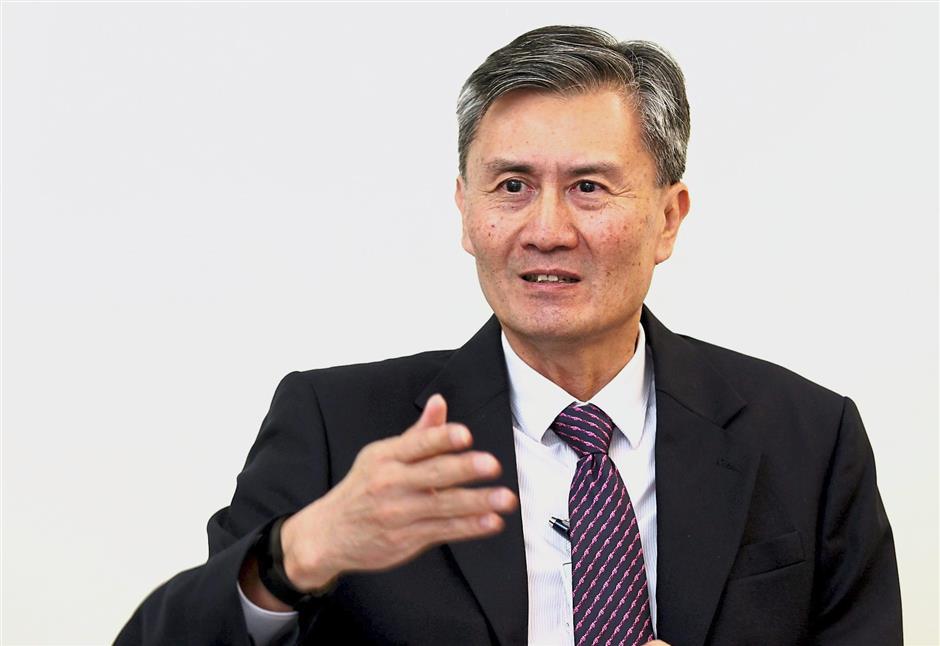 Ng says in challenging times, retailers should seek opportunities by offering both an online and physical presence.

“This way, shoppers are able to review and order products online and test or pick up products at physical stores. Food and beverage tenants offering delivery services, meanwhile, will allow landlords to get a cut of online sales.

He says malls could also consider adopting a hybrid model of art and commerce.

Ng also says retailers could offer a retail mix providing innovations and services that cannot be easily or fully replicated by e-commerce.

In an interview with StarBizWeek earlier this year, Ameer said Malaysia’s economic prospects looked bright, pointing out that the country had “plenty of good things going for it” and that it would bode well for the local retail industry.

“A country like Malaysia... we have so many good things going for us. There are no other countries in the world where there are three or four races staying in harmony,” he says.

“And it’s not a tiny percentage, but a majority. It can be disruptive if not maintained carefully, but we’ve managed so well. There are countries with multiple races and they have so many problems.”

Ameer says Malaysia was in a good position to leverage off the economic giants China and India.

“Malaysia is at the right place. China is growing and so is India,” he says, adding that Indonesia too, had been experiencing positive growth in their economy.

China’s economy grew by 6.7% in 2016, compared with 6.9% a year earlier. According to the World Bank, India is currently the world’s fastest growing economy, with a real gross domestic product growth rate of 7% in 2016. Last year, Indonesia’s economic growth reached 5.02%.

“The Chinese are comfortable coming to Malaysia because when they come they see the same thing – they see China, in a way. They have Chinese restaurants to go to. The Indians come, they go to Masjid India. They have their tosai, their roti perata here. When they come, the feel at home!”

Ameer’s point is that Malaysia, having a diverse culture, would be a haven for foreign investors, especially those from China and India.

“This helps not only in tourism, but also a boost to those that want to invest here. When the Chinese want to invest and want to employ people, they will definitely look for a Chinese first. The same with the Indian investor!

“It’s because they speak the same language and embrace the same culture!”

Ameer adds that many citizens don’t realise how lucky they are to live in a country like Malaysia.

“We Malaysians tend not to appreciate the gold mine that we’re in.

Compared to a lot of other countries, our command of the English language is actually quite good. As such, it is a boost – for tourism and investments into Malaysia.

“And we are also rich in resources – both intellectual and natural resources. We’re comfortable, but we shouldn’t become too comfortable.”