Rail link to be growth catalyst for the property market

THE KL-Singapore high-speed rail (HSR) project, which some have heralded as a “game-changer”, looks set to play a big role in the country’s transformation plan... not just in the way of public transport, but also in terms of property development.

Expected to be operational in 2026, it will include seven stations in Malaysia – Bandar Malaysia, Bangi-Putrajaya, Seremban, Melaka, Muar, Batu Pahat and Iskandar Puteri – before reaching its last destination in Jurong East, Singapore.

Zerin Properties chief executive officer Previn Singhe says the development of the HSR, which will cut travel time to a mere 90 minutes from KL to Singapore via six cities in Malaysia, will lead to numerous positive impacts and will become growth catalyst to local property market at proposed station locations.

“As per the norm in international railway projects, Bandar Malaysia will see the most prominent growth as the terminus location of HSR,” he tells StarBizWeek.

“Bandar Malaysia, a mixed-use urban development, is set to become the next major transportation hub and serve as KL’s gateway to Singapore with excellent connectivity to other parts of Greater KL via MRT lines 2 and 3, KTM Komuter, ERL, and future access to major highway networks.”

Previn says the location of the terminal station in Bandar Malaysia, which is only 7km away from the KL city centre, will result in a multiplier effect on other mega developments such as Tun Razak Exchange and Bukit Bintang City Centre. 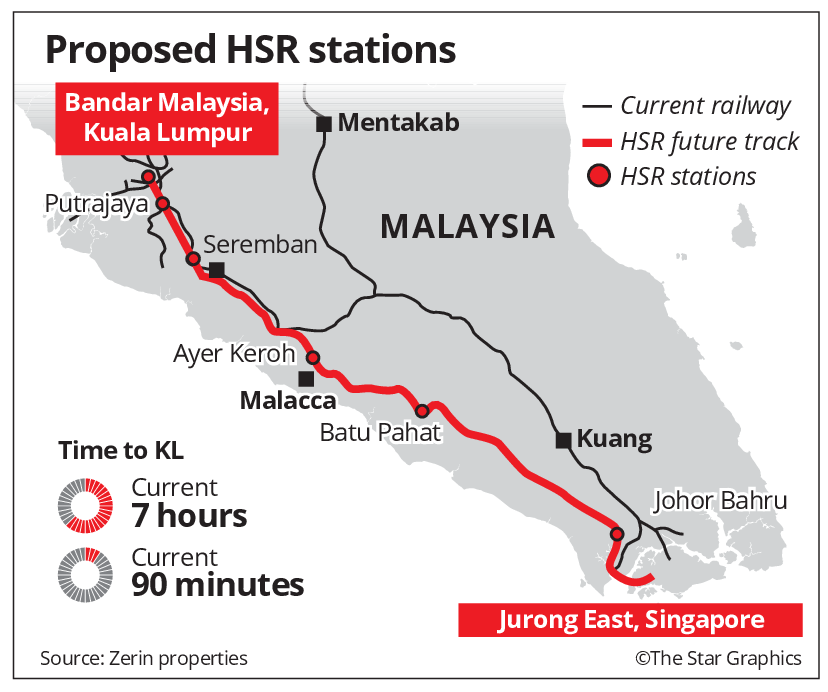 “The KL city centre property market and Taman Desa (located within close proximity to Bandar Malaysia) will see growth in property values and rental yield as a result of increased demand for housings. This would augur well in addressing the oversupply situation in Kuala Lumpur high-end condominium market.

“Moreover, it will also improve demand for office spaces and benefit tourism and retail sectors in Klang Valley due to tourist influx from Singapore (Singaporeans and foreigners alike).”

As for the HSR stations, Previn says the growth of the local property market in these areas will be mostly driven by major property developers with landbanks at or near the proposed stations.

“These transit stations are surrounded mostly by agricultural land as well as development land. It is expected that the proposed HSR stations will result in change of land use surrounding the stations in order to capitalise on development potential.”

, developer of Gerbang Nusajaya that will house Iskandar Puteri HSR station, is the biggest beneficiary considering the size of its landbank and proximity to Singapore,” he adds.

“Brisk sales of residential products in Gerbang Nusajaya, namely Melia Residence and Leisure Farm resort styled villas which is located two minutes away, is a testament to the HSR’s impact on surrounding property market.

“Apart from residential market which is expected to benefit from increased demand for cheaper homes from Singaporeans and expats, HSR Iskandar Puteri station is also anticipated to create opportunities in other niche markets such as development of retirement villages, healthcare and wellness, education hub, hospitality, retail and office sectors.” Growth centre: Previn says Bandar Malaysia will see the most prominent growth as the terminus location of HSR.

“Locations of these HSR stations are intended to act as catalyst for the developments through improved connectivity.”

“The Batu Pahat station is proposed within the township of Genting Pura Kencana in Sri Gading, a project launched by Genting Plantations Bhd

The proposed locations of Ayer Keroh and Bangi-Putrajaya HSR stations, on the other hand, will likely to benefit a larger share of beneficiaries, he says.

The proposed location of Bangi-Putrajaya HSR station in Precinct 14, next to Kampung Abu Bakar Baginda, meanwhile, will result in gentrification of the area, says Previn. He says the area is presently occupied by village homes on Malay reserve land plots.

“The proposed connection to Putrajaya Sentral and Cyberjaya via tram services, if materialised, will greatly improve connectivity and will encourage developments of new neighbourhoods and commercial areas.”

To the uninitiated, the HSR is a type of rail transport that operates significantly faster than traditional rail traffic, using an integrated system of specialized rolling stock and dedicated tracks. Land valuation: Tan says the next round of increase will be seen when land acquisition takes place in 2018.

Based on reports, China has 22,000km of HSR as of December 2016, accounting for two-thirds of the world’s total.

According to the Malaysia’s official HSR website, the idea of the project was initiated through the Economic Transformation Programme to transform Malaysia into a high-income nation.

“The HSR aims to be an alternative travel mode between two of South-East Asia’s most vibrant and fast-growing economic engines,” the website says.

“The HSR is more than just a transportation project – it is an impetus towards socio-economic development in Kuala Lumpur and the intermediate cities along the HSR corridor, starting with economic clusters centred around each station,” says the official website, adding that the project will ultimately change how people live, work and travel entirely.”

Since the HSR is a long-term project, Previn says it is essential to develop a transit-oriented masterplan for each transit stations to ensure creation of well-planned and sustainable townships.

“Last mile connectivity within the locality of each transit station as well as the frequency and reasonable fare structure are also pertinent in order for HSR to be a game-changer in the local property market.”

Previn says one of the prime objective of the HSR is to improve connectivity between Malaysia and Singapore and key intra-cities in Malaysia by cutting short travel time in order to facilitate commute of Malaysians to their workplace in Singapore.

“With HSR’s Express, Domestic and Shuttle services, now Malaysians, Singaporeans as well as expats are likely to consider settling down in intermediate cities where the transit stations are located due to availability of cheaper homes and may choose to work in Singapore or Kuala Lumpur for better career opportunities.

“This would lead to creation of more dorm towns along the HSR track.”

Dorm towns are a town that people live in - and from where they travel to work in a bigger town or city.

However, Previn adds that the creation of dorm towns would be possible only if the fare structure is reasonable and affordable.

“Some may choose to commute on weekends instead of daily to reduce travelling cost,” he says.

It is noteworthy that a number of the HSR stations - namely Muar, Batu Pahat and Iskandar Puteri, are located within Johor alone.

“Actually, property, especially land, has already been factored in the effects of the HSR to a certain degree. This can be seen in the price increase in the areas speculated to be HSR stations, namely Muar, Batu Pahat and Iskandar Puteri.

“However the next round of increase will be seen when land acquisition takes place. This will take place in 2018,” he says.

Tan says the likely places to be acquired for the station and rail track are on display since Nov 1.

“We are waiting for the gazette notification either under Section 4 or Section 8 of the Land Acquisition Act. The latter section is to state the lands which are confirmed to be acquired.

“At this stage, prices of lands surrounding the proposed stations are expected to be enhanced due to their improved land use.”

Tan emphasises that the impact on the Johor market will be within the towns where the stations will be located.

“Lands will be the first sub-sector to enjoy the benefits. During the construction period, residential houses will enjoy rental demand. Hotels will be much in need due to the influx of consultants and others to the towns.

“The degree of impact really depends on what is planned to made the stations a catalyst of attraction and change in the towns. If well planned, it can even affect the nearby towns. Otherwise it is no more different than just another train station.”

Previn points out that Johor is a very sizeable state with lots of potential.

“It is timely to focus on the growth of Johor as a whole rather than solely concentrating on Iskandar Malaysia.

“As such, the proposed stations within Batu Pahat and Muar towns provides great opportunities to accelerate growth in these presently underdeveloped areas. With improved connectivity, there will greater demand for mass housings in these towns.”

In mid to long term, Previn says there will be substantial growth in commercial (retail and business centres) and industrial areas to cater for the potential increase in population.

and Malaysian Resources Corp Bhd (MRCB) announced that they are collaborating to bid for the project delivery partner (PDP) role in the HSR project.

Gamuda and MRCB will each have a 50% stake in the entity bidding for the PDP project. Upon the successful awarding as the PDP, Gamuda and MRCB will enter into the relevant definitive agreements to formalise the joint venture (JV) and set out the rights and obligations of each party.

MyHSR Corp Sdn Bhd, which is owned by the government, had called for the tender last week to appoint the PDP for the HSR. The PDP is tasked with assisting in the Malaysian civil infrastructure portion of the project.

According to MyHSR, prerequisites for companies that are interested in the PDP role include those that have undertaken railway projects in Malaysia before and are able to demonstrate comprehensive knowledge of local Malaysian railway construction best practices, regulatory requirements and supply market conditions.

Other than the PDP tender, another portion that would be of focus for potential companies is the tender for the upcoming assets company (AssetsCo). The AssetsCo tender will focus on systems and trains and is expected to be launched by the end of this year. Both the PDP and AssetsCo tenders are expected to be completed in 2018.

The AssetsCo tender, which will be jointly tendered out by both Malaysia and Singapore, has already seen some interest from other companies.

George Kent (Malaysia) Bhd had in October formed a pre-consortium agreement with Siemens Aktiengesellschaft, Germany, and Siemens Pte Ltd, Singapore, to bid for the AssetsCo tender.

George Kent and Siemens will bid for the development, financing, construction, technical operations and maintenance of the HSR.

, had said in July that it was bidding for the AssetsCo tender of the HSR with a Japanese consortium. The ambitious KL-Singapore HSR planned track alignment tracks closely with the North South Expressway and is estimated to cost around RM60bil.