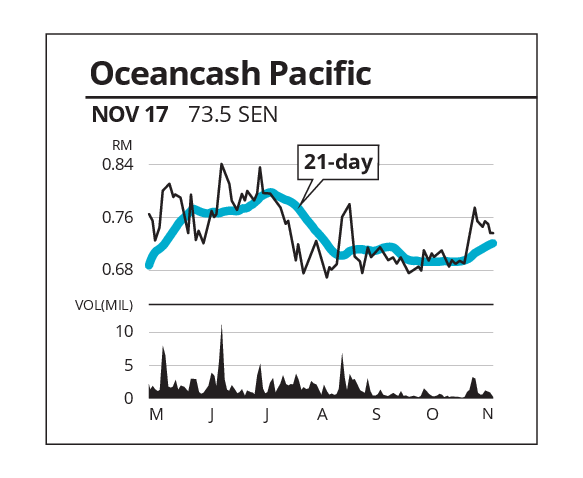 (Code:0049) has enjoyed a significant jump in its share price so far this year, almost doubling from 39.5 sen on Jan 3, to a high of 75 sen in intra-day session yesterday.

The stock saw its best days in Q2 as a meteoric rise on April 3 and 4 witnessed the stock surge from the 55.5-sen level to the 70-sen mark before proceeding to pace higher to its all-time peak of 86 sen.

With such a rapid rise in fortunes, the counter was due for a correction as investors took a breather and reaped the profits.

Based on the daily chart, another attempt to challenge the peak in July fizzled and the stock entered consolidation mode, trading in the lower 75-80 sen band.

The 200-day SMA, which has remained intact throughout the stock’s ascension this year, remains in a healthy upward trending position.

Apparently, this counter shows healthy and north-facing indicators. The slow-stochastic momentum index gave a “buy” signal in mid-week and is poised for another bullish cycle. It is placed relatively low in the neutral territory, which means there is plenty of room for the bulls to run before they reach the overbought zones.

In addition, the daily moving average convergence/divergence histogram is also bullish, although more tempered in its posture. It is moving almost parallel to the signal line but keeping afloat in positive territory.

Meanwhile, the 14-day relative strength index is pushing upwards from the neutral area as the current trend gains strength.

Trading volume, however,has not returned to the levels seen during the upwards push in Q2, suggesting investors may still be cautious given the tepid principal market environment.

Should the buying resume, the bulls are poised to re-test the historical peak of 86 sen, or explore uncharted territory.

To the downside, the 200-day SMA offers concrete support at the 67-sen level.