The Securities Commission of Malaysia building in Kuala Lumpur is a 2001 Asean Energy Award winner where it saves RM2.5mil per annum alone on electricity bills.

The SC claimed in a suit filed on May 18 that Low had communicated material non-public information, namely the proposed privatisation of Worldwide, which was undertaken by PKNS, to Tan, Liaw, Hoi, Chua, and Leong Yap, in breach of section 89E(3)(a) of the Securities Industry Act (SIA) 1983. Low was the deputy general manager of corporate affairs in PKNS and a director of Worldwide at the material time.

The SC also alleged that Leong Yap and Tan had further communicated the said information to Leong Hing, and also Hoi and Liaw respectively.

SC claimed that Tan, Chua, Hoi, Liaw and Leong Hing breached section 89E(2)(a) of the SIA when they purchased Worldwide shares while in possession of the material non-public information. SC seeks a disgorgement of three times the profits earned by the defendants as a result of the insider trading and a civil penalty of RM1mil from each of the defendants.
Article type: metered
User Type: anonymous web
User Status:
Campaign ID: 18
Cxense type: free
User access status: 3
Corporate News Courts Crime 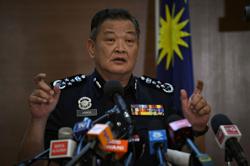