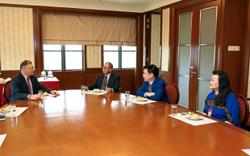 It said on Friday his appointment of the property company takes effect on Feb 1. MK Land is an associate company of EMKAY Group.

Mohan, 56, takes over from Lau Shu Chuan who has relinquished his post at MK Land.

In the statement, MK Land said Mohan has an honours degree in civil engineering from University Malaya.

“Mohan started his career in a soil investigation company before working on the Penang Bridge project.

“Mohan has been in the property development industry since 1986. After his tenure with a reputable housing development company in Perak, he joined the Emkay Group and has held several senior management positions. His last stint with the EMKAY group was as COO,” it said.

In 2005, he formed his own company and implemented various projects and developments.

Prior to joining MK Land, Lau had worked with two of the Big Four accounting firms and a local public group of companies.

He has been involved in the areas of finance, audit, corporate consultancy, re-structuring and recovery services.