THE Malaysian economy is slowing down and indications are that the risks for a further slowdown is higher now despite Bank Negara’s more optimistic forecast for a better second-half economic performance.

Governor Datuk Muhammad Ibrahim, in his inaugural quarterly economic briefing to the media as central bank chief, says growth for the first half of this year will be lower than the first six months of last year.

“We expect the second-half to start improving and to be able to get to the 4% to 4.5% growth target. Our data shows that we’re on-track and we should be able to get there,” he says.

Muhammad took over from Tan Sri Dr Zeti Akhtar Aziz at the beginning of this month,

However, he warned that Malaysia’s fairly open economy is susceptible to global headwinds. In fact, growth for the first-quarter on a year-on-year comparison has come off pretty significantly despite beating economists’ estimates for a 4.0% expansion. Gross domestic product (GDP) grew 1.0% when compared to the previous quarter’s 1.2% expansion.

The last time GDP had plumbed to such levels on a year-on-year basis was during the global financial crisis of 2008/2009. The central bank noted that the moderation in growth mainly reflected external shocks to the economy and cautious spending by the private sector.

Private sector consumption and investment has been crucial in supporting economic growth.

“The pullback in private investment reflects the weak business sentiments,” he says, but adds that should private consumption be sustained, then the 4% to 4.5% growth target is achievable. Meanwhile, Muhammad does not expect Malaysia to go into a recession, pointing out that improving manufacturing activity, better commodity production from diminishing impact of the El Nino weather phenomenon and sustained private consumption will support the economy in the second half of the year.

He adds that reforms carried out in the past two decades to transform the economy has also helped make the economy more resilient and in this respect, the pace and stance of reform will continue. “We’ve been very pro-active in managing the financial system and the economy and going forward, it will remain the same,” Muhammad says.

He says the ringgit will also reflect the economic fundamentals in the long-run, with daily volatility in the currency to be expected. Muhammad did not want to reveal too much of the monetary policy strategy going forward as the monetary policy committee meets next week.

“As far as we’re concerned, our overnight policy rate (at 3.25%) is accommodative and growth-friendly at the moment,” he says, adding that the central bank continuously look at the data to decide on the benchmark rate as well as the statutory reserve requirement (SRR - a requirement that commercial banks have to set aside a certain amount of their cash with their central banks on a mostly interest-free basis).

Muhammad says the move to reduce the SRR by 50 basis points to 3.50% from February has eased the cost of funding on banks with the Kuala Lumpur Interbank Offered Rate, the rate at which banks lend to each other, having declined 12%.

“We’ll look at the data and take the necessary steps,” he says, responding to a question on whether there are more SRR reductions in the pipeline.

Commenting on negative rates to which several central banks including the Bank of Japan has adopted, Muhammad says these rates “are suitable for their own circumstances. If this works out and they’re able to grow demand and consequently their economies, then that’ll be very positive for us”.

In regards to China’s slowdown and debt problems, Muhammad says China’s ongoing transformation will benefit countries like Malaysia, which has close trade linkages with the country. He says there will be issues but that the reforms will ensure China will be on a better economic footing.

On the issue of Bank Negara’s fine on 1Malaysia Development Bhd (1MDB) for failing to comply with rules under the Financial Services Act, Muhammad says the payment of the compound will mark the close of investigations.

“We’ve closed this investigation into 1MDB,” he adds, declining to reveal the amount that 1MDB paid for the fine. 1MDB had issued a statement saying that the sovereign strategic investment firm will pay the fine by May 30. 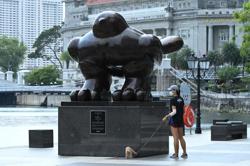 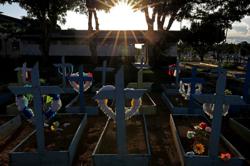