The tiny but mighty shareholder

’s change of auditors raises a lot of questions

WHO says minority shareholders are a helpless lot? How can that be true when a person with a minuscule number of shares in a listed company became the only one to nominate the new external auditors for the company? And he didn’t even have to explain why he did so.

He just threw out the name of the accounting firm and came up with a proposed resolution to be tabled at an extraordinary general meeting.

It was then up to the board of directors to assess the suitability of the firm. The board decided that the appointment of the new auditors was in the best interest of the company and its shareholders, and thus recommended that shareholders at the EGM vote for the proposed change of auditors. The shareholders did as advised.

Take a bow, Ko Boon Leong of Setapak, Kuala Lumpur. If there were such a thing as the Tiny-but-Mighty Corporate Player of the Year Award, you’d likely be a top candidate for 2015.

Then again, an accolade like that shouldn’t be given away cheaply. There should be diligent scrutiny. Let’s go over the story and raise questions when necessary.

But first, the reason this has come up is because the auditors appointed last year now wants to step down, after less than six months in that role. Accounting firm CHI-LLTC explained that its workforce had shrunk recently and it therefore couldn’t handle the increasing work arising from the listed company’s “recent expansion plan”.

The listed company is Nexgram Holdings Bhd, which has been in the news lately after the Securities Commission had issued a public statement on Jan 15 regarding the company’s offer to buy all the securities of Ire-Tex Corp Bhd. It was revealed that three subsidiaries of Nexgram are the focus of ongoing enquiries by the SC and Bursa Malaysia. On Thursday, Nexgram applied for consent from the SC to withdraw the offer for the Ire-Tex securities.

Back to the replacement of auditors last year. On July 8, Ko sent a letter to Nexgram to nominate CHI-LLTC as the new auditors, taking over from SJ Grant Thornton. He also offered a draft resolution for the proposed change.

According to the letter, Ko had 1,333 Nexgram shares. That’s almost nothing compared with the company’s 1.88 billion issued shares. Nevertheless, as a shareholder, he’s entitled to nominate the auditors, according to the Companies Act.

But why him? And why make the nomination at that point, when there had been no disclosure regarding a need to change auditors?

Based on announcements made through the stock exchange, the first time the investing public had any idea Nexgram was switching auditors was on July 20, when the company issued a notice of the EGM to consider the proposed change of auditors. The notice mentioned the resignation of SJ Grant Thornton, and yet, Nexgram hadn’t announced that development.

The relevant details only emerged the next day with the release of the circular to shareholders. Some of the fresh information certainly deserves greater attention.

In late June, SJ Grant Thornton told the Nexgram board that the fee for the 2015 audit would be increased from RM200,000 to RM500,000. The accounting firm said the hike was because it classified the 2015 audit as high-risk and would therefore need to use more resources for the job.

The high-risk classification is the result of “significant changes in the level of activities in the Nexgram group” and the Audit Oversight Board’s review of Nexgram’s 2014 audit files, which led to the requirement for additional work to be performed during the 2015 audit.

The board met on July 8 and agreed to reject the fee revision, describing it “not sensible and totally unreasonable”. On the same day, the board received Ko’s letter nominating CHI-LLTC as the new auditors and alluding to SJ Grant Thornton’s resignation.

But Nexgram received SJ Grant Thornton’s letter of resignation only on July 15, after the board had written to the firm on July 10 to say it wouldn’t accept the new audit fee.

In its circular to shareholders, Nexgram says it received Ko’s notice of nomination in “anticipation of the outcome of the negotiation with SJ Grant Thornton”.

That bit of pretzel logic can only trigger questions. How did Ko know about the directors’ stand on the higher audit fee? In fact, how is he — a person with merely 1,333 Nexgram shares — even aware of the fee revision? How and why has he chosen CHI-LLTC as the standby auditors out of the more than 50 other accounting firms in Malaysia that are registered as auditors of listed companies?

And why didn’t the nomination come from somebody else, say, Datuk Tey Por Yee, who was then Nexgram’s CEO and MD, and also a substantial shareholder?

According to the circular to shareholders, the board reviewed CHI-LLTC’s fee and engagement proposal, and after consulting the audit committee, it decided that the firm’s proposal was reasonable and cost-effective.

Among the factors taken into account by the board and the audit committee, says Nexgram, were CHI-LLTC’s profile, the adequacy of the firm’s resources and experience, and the persons to be assigned to the audit. These were weighed against the size and complexity of the listed company’s operations.

However, there was no mention of the change of auditors in Nexgram’s annual report 2015, not even in the audit committee report.

The EGM was held on Aug 5 and the shareholders approved the appointment of CHI-LLTC in place of SJ Grant Thornton. CHI-LLTC was reappointed in the annual general meeting on Oct 27.

However, on Wednesday, Nexgram announced that CHI-LLTC had tendered its resignation but would remain as the auditors until the new auditors are appointed at an EGM.

Executive editor Errol Oh is amazed that there’s still a lack of transparency in how auditors of listed companies are replaced. 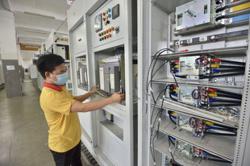